India holds on to Siachen...because Pakistan showed the glacier area on its maps in 1975 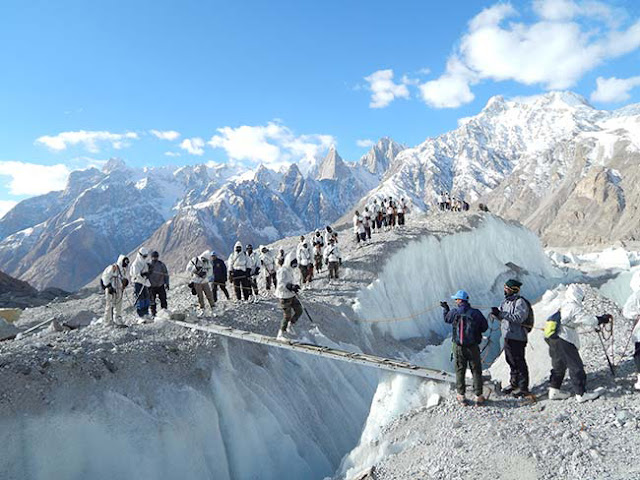 My article India holds on to Siachen...because Pakistan showed the glacier area on its maps in 1975
appeared in Mail Today.
Here is the link...

The Siachen glacier has recently been in the news, 10 Indian soldiers tragically lost their lives in an avalanche. This triggered another avalanche: Indian ‘experts’ commenting on why, since 1984, successive governments have allowed 900 Indian Army personnel to die?
Why occupy such inhospitable terrain, mostly above 20,000 feet, with temperatures reaching minus 60 degrees?
Why should the tax payer spend Rs 200 to transport a 2-rupee roti to the glacier?
To answer, it is necessary to look at some historical facts. In 1975, when a German expedition applied for rafting on the Indus River, Col Narinder ‘Bull’ Kumar, a well-known military mountaineer, discovered that the Germans had a US map showing the Siachen Glacier as part …of Pakistan.
Col Kumar later told journalist Nitin Gokhale, author of Beyond NJ 9842: The Siachen Saga:


Those maps, to my surprise, had shown the ceasefire line [today known as the LoC] being extended to the Karakoram Pass.

By that time, not only was Pakistan openly showing the glacier area on their maps, but Islamabad had also begun sponsoring mountaineering expeditions on ‘their’ glacier. After a first expedition led by Col Kumar in 1978, other Army missions returned to the glacier in 1981 and during the following years; finally in 1984, it was decided to permanently occupy the glacier.
Gokhale quotes from an assessment by the Northern Command in 1984:


Pakistani occupation of the Siachen upto the Karakoram Pass would lead to their domination of the Nubra Valley and the route down to Leh. Indian positions in Siachen as well as in the vicinity of the Karakoram Pass are thus a formidable wedge between POK, the 4500 sq km area ceded by Pakistan to China [the Shaksgam Valley] and Aksai Chin occupied by China.

It would have been a formidable strategic corridor with Pakistan and China controlling the Karakoram Pass and threatening Ladakh; it appeared to be a new Aksai Chin in the making (in the 1950s, China had built a road cutting across India’s territory, without Delhi being aware of it).
This strategic concern pushed India to take the hard decision to settle on the glacier and the neighbouring peaks in the Saltoro range.

There is also a not-often mentioned, legal angle. On January 1, 1949, India and Pakistan agreed, under the UN auspices, to a Cease Fire Line (CFL), which had to be subsequently demarcated.
The military representatives of Delhi and Islamabad eventually met in Karachi between July 18 and 27, 1949; the Indian delegation was led by Maj Gen S.M. Shrinagesh, who later became Army Chief. Before leaving for Karachi, the delegates received an in-depth briefing from Sir Girija Shankar Bajpai, the Ministry of External Affairs and Commonwealth’s Secretary General.
Sir Girija explained to them the legal position: the UN resolution of August 1948


had conceded the legality of Kashmir's accession to India and as such no man's land, if any, should be controlled by India during the period of ceasefire and truce.

Further, the onus of proof to convince the commission in any disputed territory, rested with Pakistan. "In the absence of any such convincing proof, and even if India had no troops on the date of ceasefire in that area, the disputed territory should automatically come under Indian control,” later recalled Gen S.K. Sinha, then A.D.C. to General Shrinagesh.
The future Governor of J&K further commented:


This convincing and legalistic argument proved a trump card in our hands at Karachi. Based on this, we obtained control of several hundred square miles of State territory where we were not in position on the date of the ceasefire.

An accord was finally reached and the Line of Ceasefire was demarcated. The last point on the map was known as 'NJ 9842'. At that time no one thought about the possibility of a war on the glaciers.
The agreement mentioned that the line continued 'thence north to the glaciers', without going into the details. The demarcation had however been done on a clear principle: If a territory was no man's land and not occupied by any of the two armies at that time, it was deemed to be part of India.
This position was then accepted by Pakistan and the UN. It remains valid today. Even if not demarcated in 1949, the glacier legally belongs to India. In early 1987, when Pakistani troops established a post on a feature overlooking India’s defence posts near the Bilafond Pass on the Saltoro ridge, Islamabad knew the legal implications.
The post was so important for Islamabad that it was named the 'Quaid Post’, after M.A. Jinnah, the first Quaid-e-Azam.
Some Indian positions, being maintained by air, suddenly became untenable. It is then that the Indian Army planned a daring, secret operation to evict the Pakistanis.
On June 26, 1987, Bana Singh captured the 'Quaid' Post; since then, the glacier and the Saltoro range have remained with India. Bana Singh was later awarded the Param Vir Chakra, India's highest bravery award.
What is disturbing is that often the Indian press swallows the Pakistani bait and portays the glacier as ‘disputed’, which is legally wrong.
And as always in India, there are peaceniks who argue that for the sake of ‘bonhomie’ with Islamabad, the Siachen should be a demilitarized zone, dedicated to ‘science’ or ‘peace’.
If accepted, it would mean that India gives up the gains obtained through the 1948 UN resolution, which recognized the validity of India’s position on the State of Jammu & Kashmir.
It could have dreadful consequences for India.
Posted by Claude Arpi at 6:56 AM