The Sichuan-Tibet rail-line on the way

The China Daily reported that the construction of a 1,629-kilometer Sichuan-Tibet railway will start in 2016.
Lobsang Gyaltsen, the Chairman of the Tibet Autonomous Region (TAR) government announced it in Lhasa during the fourth session of the TAR’s 10th People's Congress: “The government will start a preliminary survey and research of the Kangding-Nyingchi railway project this year, and accelerate the construction of Sichuan-Tibet railway in the 13th Five-Year Plan (2016-20) period," he said.
Kangding is known as Dardo or Dartsedo in Tibet. It is today the capital city of Gartse Tibetan Autonomous Prefecture.
Yin Li, the acting governor of Sichuan confirmed the news in Chengdu during the 12th People's Congress of Sichuan.
The railway will be connecting Lhasa to Chengdu. It will be divided into three sections from west to east: Lhasa-Nyingch, Nyingchi-Kangding, and Kangding-Chengdu.
The railway line will run for some 1,000 km on the Tibetan plateau.
The construction of the western and the eastern sections already started last year. The entire project is expected to be completed in the early 2030s.
The China Daily quoted Lin Shijin, a senior civil engineer at China Railway Corp, saying: “Perched at over 3,000 meters above sea level, and with more than 74 percent of its length running on bridges or in tunnels, the railway will meander through the mountains, the highest of which is over 7,000 meters.”
It will cross the major rivers Min river (a tributary of the Yangtze), the upper stretches of the Yangtze and the Yarlung Tsangpo (later Siang and Brahmaputra).
Lin added: “The accumulated height it will climb reaches more than 14,000 meters, and it will cross many fault zones. It's like the largest rollercoaster in the world. With a designed service life of 100 years, it is believed to be one of the most difficult railway projects to build on Earth."
According to Zhao Jinxue, a rail construction ‘risk appraiser’: “It will cost at least 100 million yuan ($15.87 million) per kilometer, similar to the cost of high-speed railways on plains.”
Lin explained the difficulty of the Sichuan-Tibet railway project: “it presents difficulties to overcome, such as avalanches, landslides, earthquakes, terrestrial heat, karst caves and underground streams, yet, it is still a worthwhile project."
Why? Because it takes today 42 hours by train and three days by road to travel from Chengdu to Lhasa; the new rail line will shorten the travel time to less than 15 hours.
It will have incalculable strategic implications for India as the train will pass near the Indian border, north of the McMahon Line in Nyingchi Prefecture (Nyingtri in Tibetan, sometimes Lyingchi in Chinese).
He Ping, a tourism agency manager in Chengdu told the Chinese publication: "The railway will effectively boost tourism, and bring a new Shangri-La to the world and tangible revenue to local people," but it will also allow People’s Armed Police’s and PLA’s reinforcements to reach the Indian border in a much shorter time, accentuating further the military strategic balance between India and China. 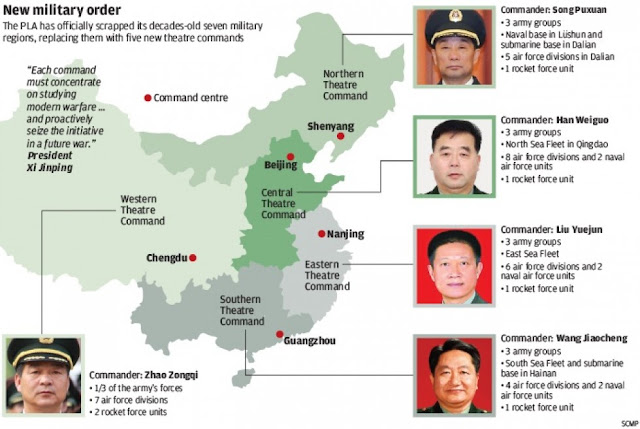 And one should not forget that with the new military reforms put in place by President Xi Jinping,, the entire plateau now comes under one Combat Zone (or Theater Command) only.
Posted by Claude Arpi at 7:41 AM