On November 21, 1950, hardly a month after the People's Liberation Army had invaded Tibet and occupied the town of Chamdo, the Political Officer in Sikkim, Harishwar Dayal send a Top Secret cable to his bosses in the Ministry of External Affairs in New Delhi.
It could be said that some parts of Dayal's assessment were prophetic.
But who was ready to listen to him in Delhi?
Dayal analyzed: "Occupation by China of the whole of Tibet or of portions of Tibetan territory bordering India, Nepal and Bhutan, or establishment of a Chinese-inspired regime at Lhasa, will create a variety of problems which are doubt engaging Government of India's attention."
It is very unfortunate that Nehru's government did not pay attention to this basic fact.
The cable contains an interesting suggestion from the strategic point of view: India should occupy Chumbi Valley. Dayal writes: "it was suggested that we might consider occupation of the Chumbi Valley up to Phari in an extreme emergency. This suggestion was NOT favoured by Government of India at the time. It was however proposed as a purely defensive measure and with NO aggressive intention. An attack on Sikkim or Bhutan would call for defensive military operations by the Government of India. In such a situation occupation of the Chumbi Valley might be a vital factor in defence."
It was obviously not favoured by the Government of India.
Another interesting point is that soon after India's independence, Lhasa claimed large portions of the Indian territory in the Himalaya.
Such a foolishness!

2. As Government of India are aware, Tibetans have in the recent past asserted a claim to Ladakh, Darjeeling, Sikkim, Bhutan and portions of Assam Tribal Areas; large sections of the India-Tibet border in the western Himalaya are undefined and there have been border disputes between the Tibetans and Kashmir and Tehri Garhwal. The Chinese have a claim to suzerainty over Nepal and disputes with Burma over the northern frontier of Burma. India's own frontier with Burma in this area is in part undemarcated and in part undefined. We must therefore be prepared for the aggressive assertion of a variety of claims, either directly by the Chinese or through Chinese-sponsored Governments in Tibet and elsewhere. Indeed it was already rumoured, at a time when it seemed doubtful whether Tibet could expect any assistance from India in the preservation of her autonomy, that some Tibetans felt that their country's best course would be to come to a settlement with the Chinese and then with Chinese assistance make various territorial demands on India. Border disputes and intrigue necessitated negotiation of Anglo-Chinese Convention of 1890 and fixation of McMohan [McMahon] line as northern boundary of Assam Tribal Areas in 1914. When they occupied Lhasa in 1910 Chinese simultaneously exerted pressure on Bhutan; this move was defeated by the staunchness of the Maharaja of Bhutan and by negotiation of the 1910 Treaty between Great Britain and Bhutan which virtually gave Government of India control over Bhutan's external relations.

3. The position is further complicated by the present disturbed conditions in Nepal.

4. Government of India are reported already to have warned the Chinese against violation of Indian frontiers in operations against Tibet. They are also understood to have accepted the view that any threat to border territories namely Nepal, Sikkim and Bhutan must be resisted if necessary with force. In view of the manifest dangers of the situation and of the lessons of history it will probably soon be necessary to warn the Chinese against interference in these territories as well.

5. At the same time a state of military preparedness is also evidently desirable. Military authorities are NO doubt considering measures for strengthening border establishments both for maintenance of internal security where this is likely to be threatened and for security against external dangers. In so doing they must take account of problems of communication and transport. On this border National Highway No.31-A, which has been heavily damaged by natural calamities this year, is of vital importance and it is essential that it should be maintained in motorable condition throughout its length. Improvement and maintenance of important internal roads in Sikkim is also of great importance. National Highway ends in Gangtok and the frontiers as well as important areas inside Sikkim can be reached only by pack transport. Strategic roads in Northern Sikkim are at present in poor condition because fund s have NOT been forthcoming for the extensive repairs required to keep them open for pack transport in all seasons. It is necessary that these roads be put in order without delay. Work on them should begin at once because it can only be carried out in the dry months of the winter season.

6. I understand that NO Animal Transport Companies are located in this region and unless transport arrangements are made in advance movement might be seriously hampered in an emergency. Local and Tibetan animals are most suitable for local conditions. Best course would be for military authorities to establish without delay an 'irregular', transport corps by requisitioning pack animals through local agencies. Animals could be kept under supervision, in the care of the muleteers themselves who could be paid for their maintenance and assisted when necessary in procurement of feeding-stuffs. This arrangement would be cheaper than immediate purchase of a large number of animals. 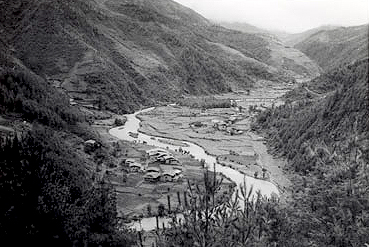 7. In Lhasa express letter No.3 (3)-L/49 dated 15th June 1949 it was suggested that we might consider occupation of the Chumbi Valley up to Phari in an extreme emergency. This suggestion was NOT favoured by Government of India at the time. It was however proposed as a purely defensive measure and with NO aggressive intention. An attack on Sikkim or Bhutan would call for defensive military operations by the Government of India. In such a situation occupation of the Chumbi Valley might be a vital factor in defence. In former times it formed part of the territories of the rulers of Sikkim from whom it was wrested by the Tibetans by force. It is now a thin wedge between Sikkim and Bhutan and through it lie important routes to both these territories. Control of this region means control of both Jelep La and Nathu La routes between Sikkim and Tibet as well as of the easiest routes into Western Bhutan both from our side and from Tibetan side. It is a trough with high mountains to both east and west and thus offers good defensive possibilities. I would therefore suggest that possibility of occupying the Chumbi Valley be included in any defensive military plans though this step would NOT of course be taken unless we became involved in military operations in defence of our borders.
Posted by Claude Arpi at 6:53 AM

Very illuminating. I wish the people sitting in Delhi had paid more attention to Dayal's telegram and done something about it. It may have changed the history of the India and our equation with China.