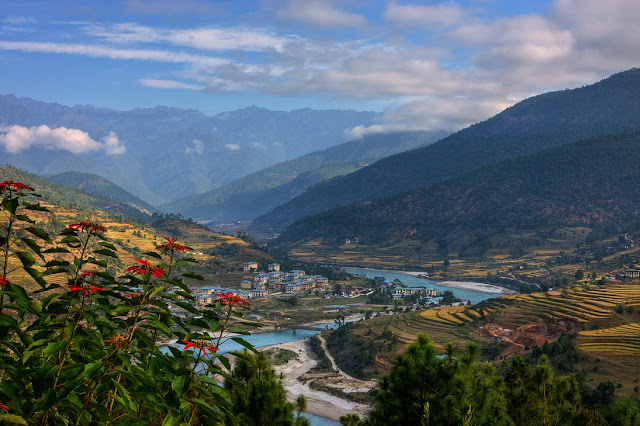 Walk the talk
In an oped in Kuensel, Bhutan’s national newspaper, Annette Dixon, Vice President of the World Bank for South Asia wrote: “Bhutan declared in 2009 that it would remain carbon neutral and has made the most ambitious pledges on cutting emissions at COP21.”
The WB official however adds: “But staying neutral as emissions from industry and transport rapidly rise will not be easy. It will require aggressively finding ways to grow economically in a carbon neutral or reduced way.”
Bhutan defined the four pillars of ‘Happiness’ as sustainable development, preservation and promotion of cultural values, conservation of the natural environment, and establishment of good governance.
GNH is officially part of Bhutan's five-year planning process, which guides the economic development of the nation.
Easier planned than done!

Though very few took note of the ‘happiness idea’ when it was first expounded, four decades later, things have changed.
Today, as the world starts looking back at the mess it has created, many believe that “after all, this GNH was perhaps not so naïve.”
In 2008, Nicolas Sarkozy, the French President commissioned a study of alternative gauges of economic welfare, while in 2010, the UK began measuring the ‘National Well-Being’.
The UN has already released its third World Happiness Report.
At the end of the Paris Conference, the European Union (EU) acknowledged Bhutan’s ‘extraordinary ambition’ in addressing climate change by signing a ‘declaration’, which recognizes “Bhutan’s unique situation as a land-locked and least developed country with a fragile mountainous environment.”
It recognises the special requirements necessary to cater for the nation’s sustainable development needs.
Today Bhutan is often cited as an example to follow.

The philosophy of Kingdom of the Dragon has indeed gone a long way since 1972. Yeshey Dorji, a renowned Bhutanese nature photographer recently wrote on his blog: “Bhutan is just too insignificant - considered from any point of view: we simply cannot make a difference, neither economically, technologically - in any way. But despite that…Bhutan does arouse some interest among world leaders and thinkers and policy makers.”
Yeshey is however not sure of the Future: “GNH is unlikely to work until we completely dismantle the present economic order - how and what we produce, how we consume, how we transport, how we market.”

Money matters
The world today being a Global Village, can a nation remain secluded and just play according to its own rules; in the case of Bhutan, without reference to its giant neighbours and their ‘development’ policies?
At the time of the Paris’ talks, The Wall Street Journal warned that while Bhutan “uses a unique barometer to measure economic progress, the message of the 2015 Gross National Happiness Index is a troubling one: Money isn’t buying enough contentment.”
With Bhutan becoming wealthier, will Happiness be consigned to the backstage for the sake of greater ‘wealth’?
The WSJ argued: “Never mind that Bhutan’s economy is growing at a healthy annual rate of nearly seven per cent. Officials here worry that modern life tends to throw things off-balance.”

Right models
The tourism industry is in part responsible for fuelling the mad race for ‘wealth’; though based on a ‘high value, low impact’ policy, ‘profit’ remains the main engine of growth.
Many in Bhutan are conscious that the nation is facing a hard choice; Kuensel suggests: “While Bhutan’s economy continues to grow and mature, different forms of economic system must be explored, studied and debated.”
While the capitalist economic system works on ‘profit’, it creates jobs and brings necessary tax revenues, does it automatically create happiness?
Observers feel that ‘finding the right kind of business model for Bhutan is worth exploring’, if the nation wants to keeps ‘happiness’ as its USP.

Another issue is the dams.
Take the Punatsangchhu-I Hydroelectric Project (PHPA I), the first stage of an initiative by the Royal Government of Bhutan and India in May 2008 to generate 10,000 MW of hydro electricity by 2020.
Apart from the fact that the hydropower project faces serious environmental glitches, most nature lovers believe that Bhutan’s rivers will be ‘killed’ by the projects.
Further, will the dams’ revenues bring more contentment to Bhutan? Only the future will tell us.
According to a survey conducted by the Royal Society for Protection of Nature, Bhutan has the highest population of the White-bellied Herons in the world.
If birds are happy, it is a positive sign, but Bhutan is nevertheless at a crossroad and unhappiness in the Dragon Kingdom would be a great loss for humanity.
Posted by Claude Arpi at 7:32 AM