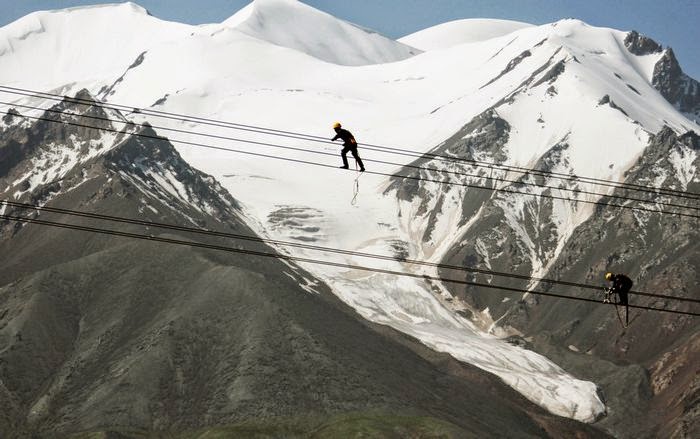 A few weeks ago, I questioned the real objective of the newly launched Sichuan-Tibet electricity grid.
Was the purpose to bring electricity from the mainland to Tibet or vice-versa?
At that time, the Chinese press said that the purpose was the former.
Now China Tibet Online speaks of a "Breakthrough in outward power transmission from Tibet".
What does it mean?
It signifies more and more dams will be required in the future ...to feed the outward power transmission and some of these dams will be built on the Yarlung Tsangpo-Brahmaputra.
Chinanews.com announced: "Tibet Autonomous Region is expected to see a breakthrough in outward electric power transmission this summer."
It quotes the Tibet Electric Power Company Limited, to say: "when the three power stations in Dzam [Zangmu?], Dondup [Pangduo?] and Guoduo [located on the upper reaches of the Mekong River in Tserwe Township] are put into operation，Tibet will begin transmitting electricity to other provinces for the first time. This will be achieved with the help of Sichuan-Tibet Power Grid and Qinghai-Tibet DC Networking Project."
It is not what China was saying a few weeks ago:


Xinhua reported that the opening of the 1.08 billion U.S. dollar project linking Chamdo in the TAR and the Tibetan Autonomous Prefecture of Garze in Sichuan Province, aims at "putting an end to the electricity shortages of the 500,000 residents of the Chamdo region and ease power strain in Tibet as a whole".

Now, the Chinese website admits: "The two lines will increase Tibet’s outward power transmission capacities to 350,000 and 20,000 kilowatts, or 1 billion and 600 million kilowatt hours a year respectively."
Beijing has invested a lot of money in the project: the Sichuan-Tibet Power Grid and Qinghai-Tibet DC Networking Project cost 4.6 billion US dollars. It was part of the 12th Five-year Plan Period (2011-2015).
China Tibet Online affirms: "Together with the Central Tibet Power Grid and Chamdo Power Grid, the two lines will certainly ease local power shortages and boost economic development in eastern Tibet. It is believed that the power grids in Tibet will cover 58 counties and benefit 2.18 million local residents by the end of the year."
Now comes the most telling part:


The foundation work for outward power transmission will be advanced steadily in 2015 by accelerating hydroelectric development in the middle section of the Yarlung Zangbo River [Brahmaputra], said Losang Jamcan [Lobsang Gyatsen], chairman of Tibet's regional government during the Third Session of the Tenth Tibet People's Congress.
Investment in power grid construction in Tibet is predicted to hit a record 60 billion yuan (9.7 billion US dollars) in the 13th Five-year Plan Period. By 2020 Tibet can bid farewell to the history of its power shortage and realize large-scale outward power transmission. The capacities in 2020, 2025 and 2035 will reach 20 million, 40 million and 110 million kilowatts respectively, industry analysts said.

In 2015, China will be "accelerating hydroelectric development in the middle section of the Yarlung Zangbo River."
The conclusion of the website was "Tibet is abundant in water power resources and will serve as an important energy base for the west-east electricity transmission project."
In other words, more and more dams will be built in Tibet ...to feed electricity to China. It will have serious consequences for India and Bangladesh.
Posted by Claude Arpi at 6:31 AM