Some 'counter-terrorism' combat exercises were recently held in Kardze Tibetan Autonomous Prefecture of Sichuan Province.
The SWAT (an acronym for 'Special Weapons And Tactics', commonly used for paramilitary forces with military-style light weapons) held what Xinhua called 'simulation exercises' to repress 'thugs' (read Tibetans).
The paramilitary troops displayed their skills by simulating 'disposal of self-immolation', extreme behavior, illegal gatherings, violent demonstrations or sit-ins.
The Chinese SWATs used techniques such martial arts, wrestling capture, anti-hijacking drills and demonstrated the use of their latest 'counter-terrorism equipment'.
Tibet seems always ahead of Xinjiang is term of repressive 'technologies'.
A few months ago, I wrote on this blog: Security: Learn from Tibet
I mentioned that a delegation from Xinjiang's capital Urumqi visited Lhasa to learn the tricks of the trade to preserve 'security' and 'stability'. The delegation was taken around by Tibet's Security Czar, Deng Xiaogang who is also the Party's Deputy Secretary of the Tibet Autonomous Region.
I then wrote: "You can be sure that the delegation had not come for sight-seeing."
The China Daily then affirmed that the Party cadres from Urumqi were very impressed by the "effective grid management system, which arranges every five or 10 households into a group. They concluded that the Urumqi government should put more effort into improving community facilities and service, enhancing the management of its floating population, and maintaining community stability."
Will an 'effective' grid system be able to stop cars ramming into tourists on the Tiananmen Square or bombings in Urumqi's railway station?
Today, the leadership from Xinjiang believes that it can learn from Tibet.
All these issues may be discussed during the 6th Xinjiang Work Forum, sometimes next month in Beijing. The Forum will take 'policy decisions' regarding the future of the restive region inhabited by the Uyghurs.
In the meantime a couple of days back, the Politburo of the Communist Party held an urgent meeting.
It was decided that "National solidarity would be achieved in Xinjiang by promoting bilingual education, patriotic religious practices and interaction between ethnic groups."
It further called for 'religious harmony and elimination of extremism'.
Remember the Middle Path approach advocated by the Muslim leaders earlier this month.
According to the Politburo statement: "Employment would also be a priority, with the goal of ensuring that at least one person in each family has a job. And education levels of all schools across Xinjiang would be enhanced.
There should be more construction projects and greater development of natural resources for the benefit of locals."
Analysts believe that it marks a shift in the policy for the region. An earlier Politburo meeting (in November 2013) had put more emphasis on security issues.
It probably means that the forthcoming Xinjiang Work Forum will have a dual approach, education and promotion of religious harmony on one hand and strickter control of the 'religious extremism' and repressive control on the other.
During the recent Politburo, President Xi said that he wanted to achieve "long-term peace and ethnic unity by cracking down on terrorists and religious extremists".
He asserted that the Government policies were 'completely accurate', though the 'war on separatists was long term, complicated and urgent'.
According to the Politburo statement: "We must take the severe crackdown on terrorism as the focus of the current war and curb the spread of terrorist attacks and the filtration of extreme religious powers. We must be confident about our victory and be prepared for the long-term battle and soundly carry out work to maintain Xinjiang's long-term stability."
In the meantime, the security forces are practicing in Tibet.
Please note that the role of the Tibetans are played by Chinese soldiers. 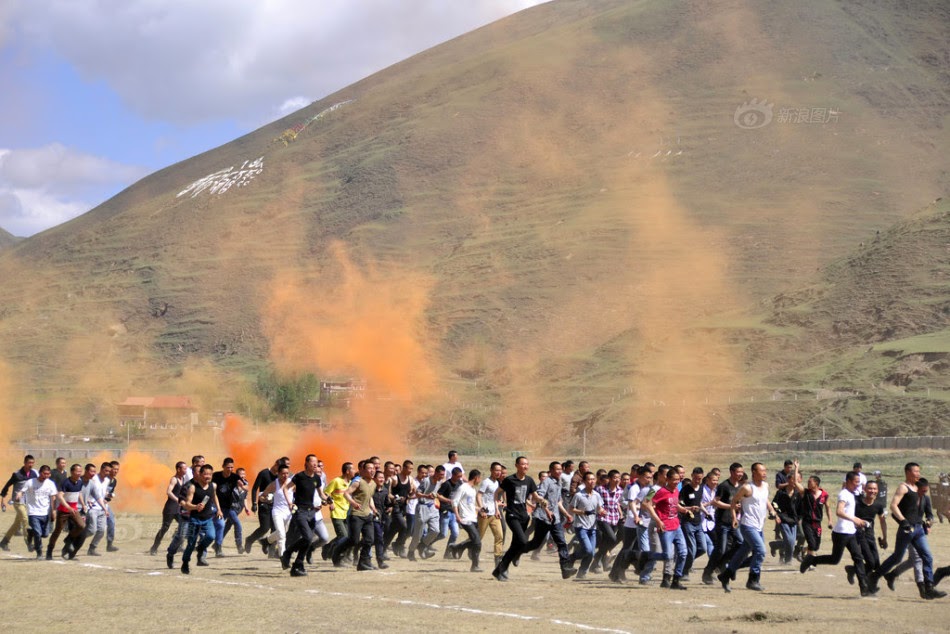 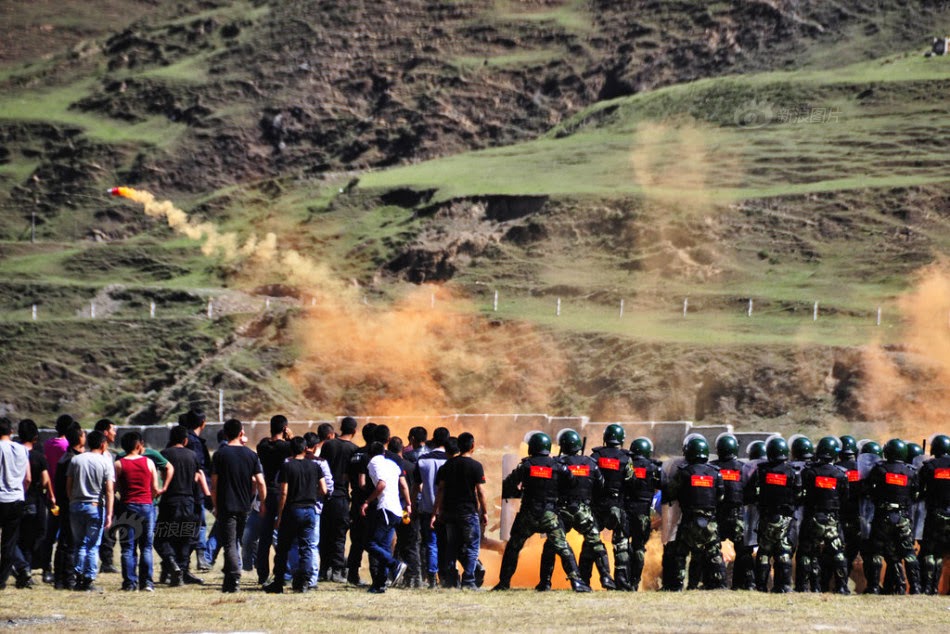 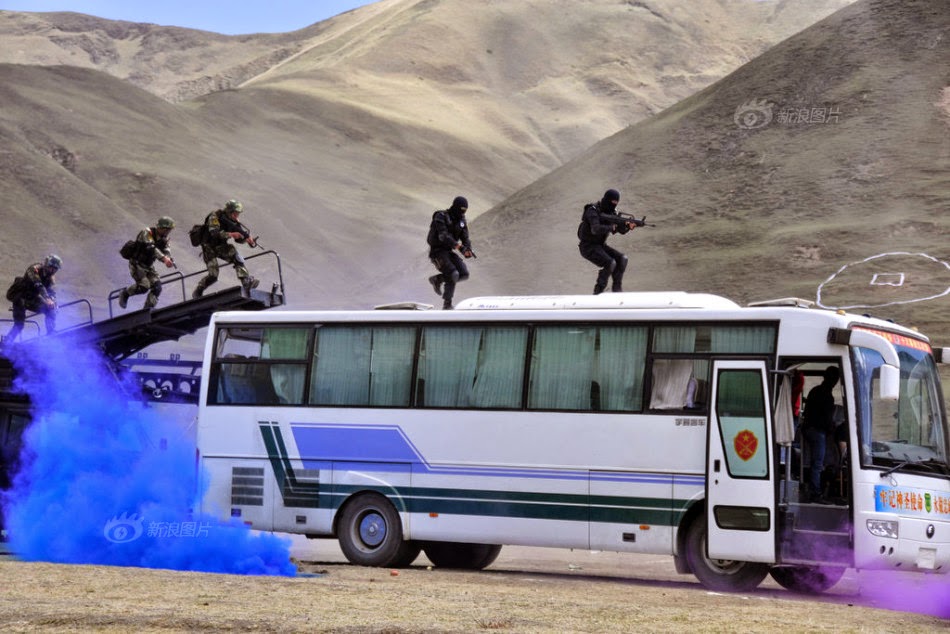 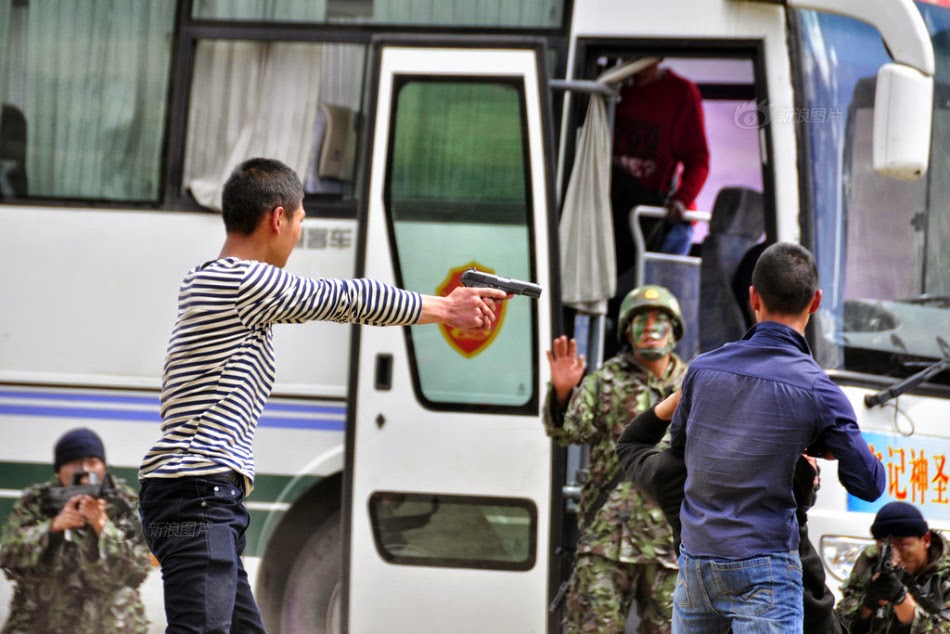 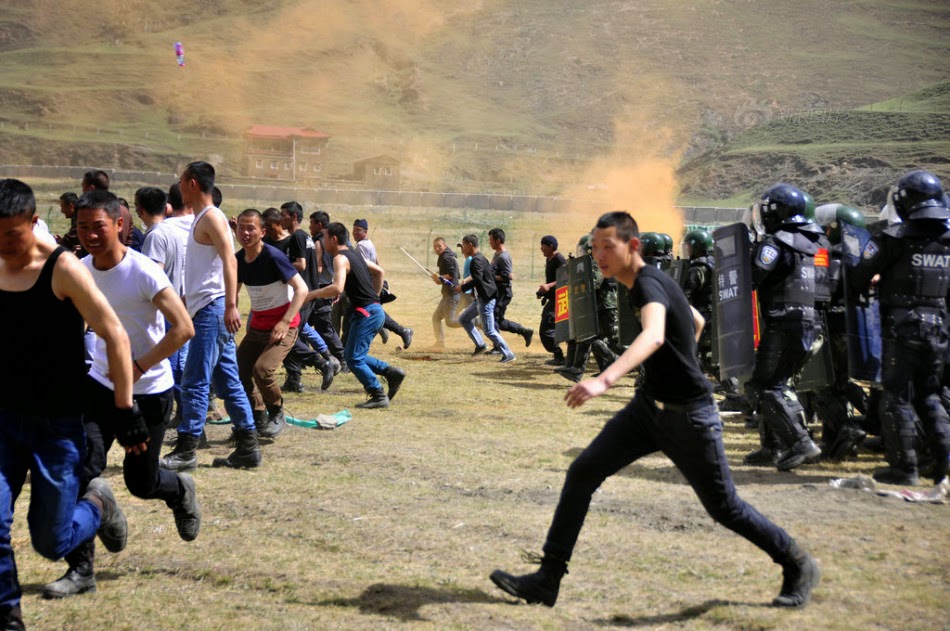 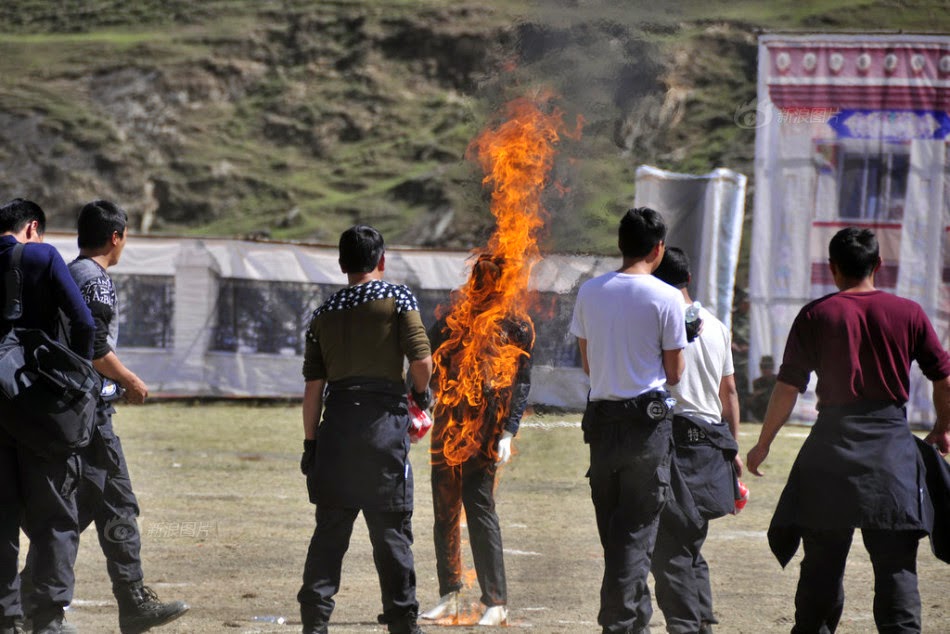 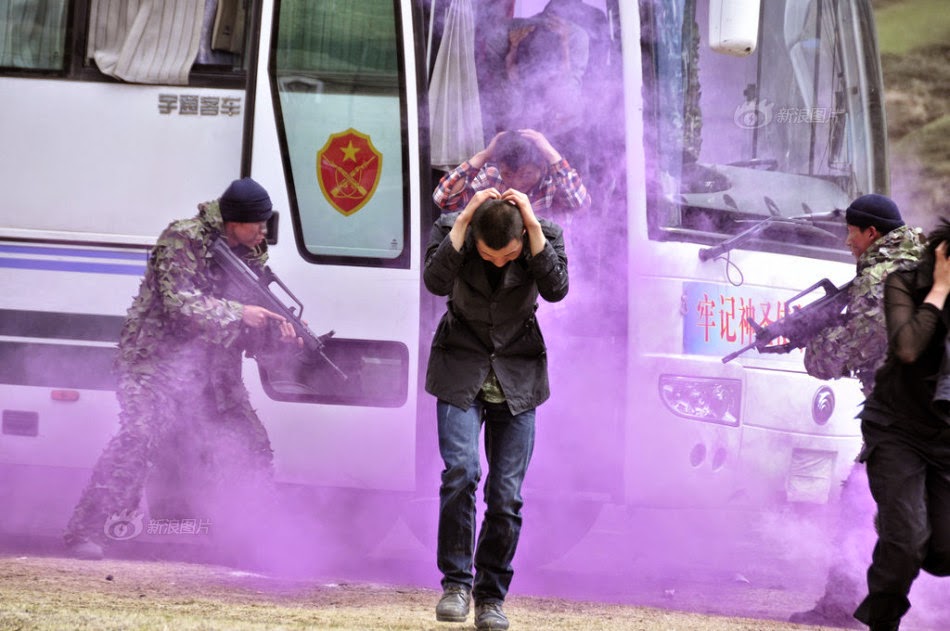 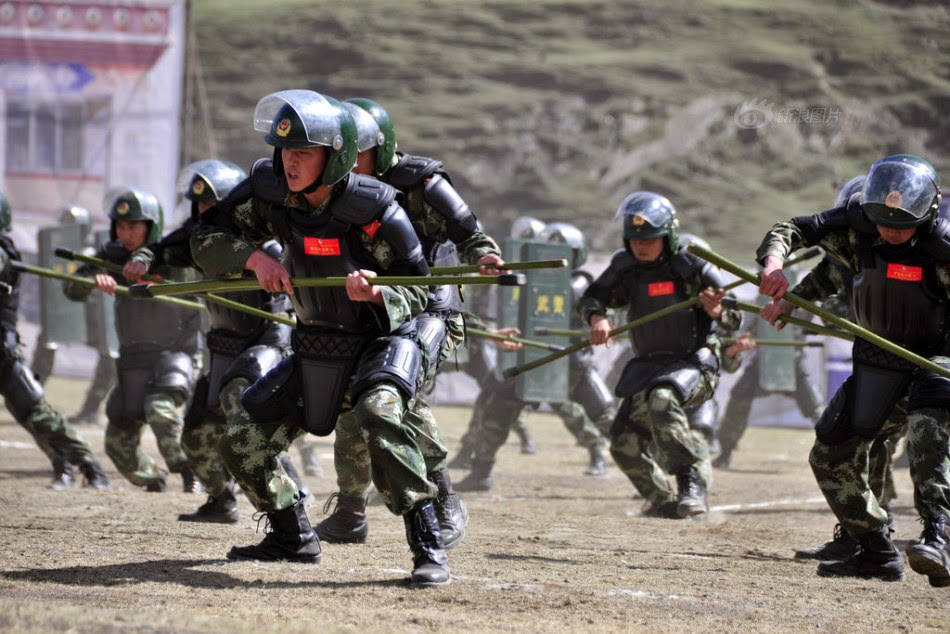 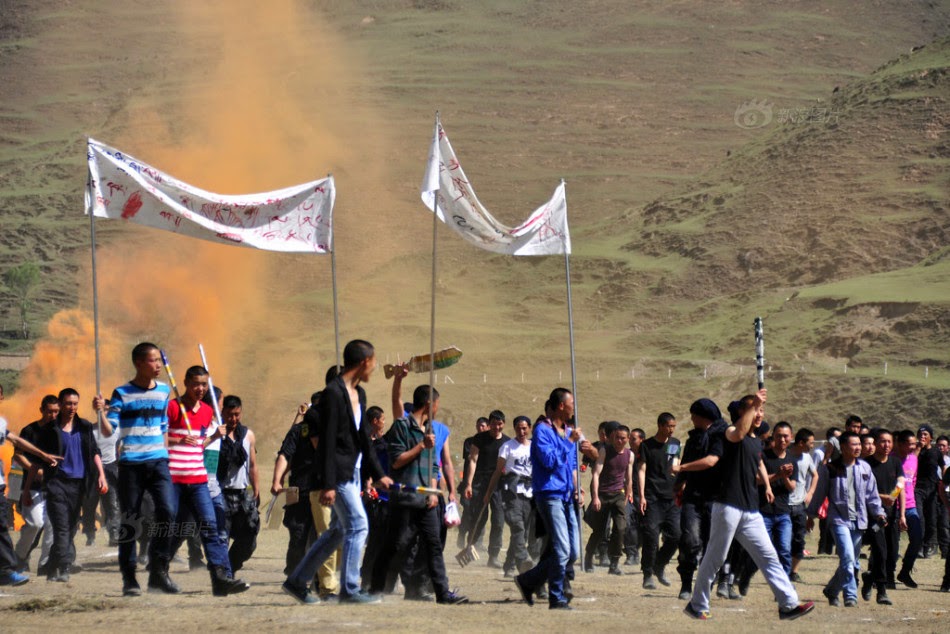 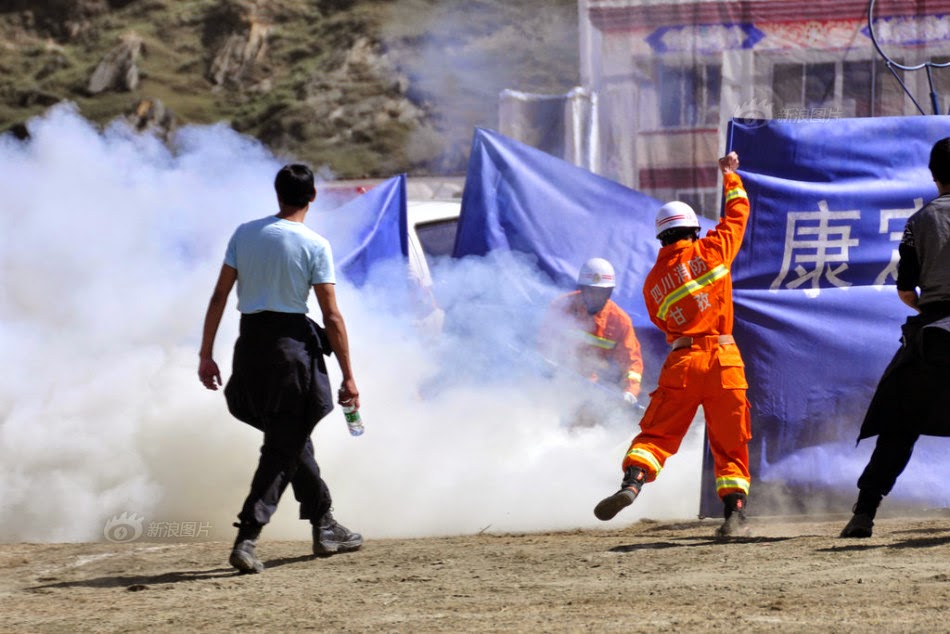