A Special Guest at the Swearing-in Ceremony 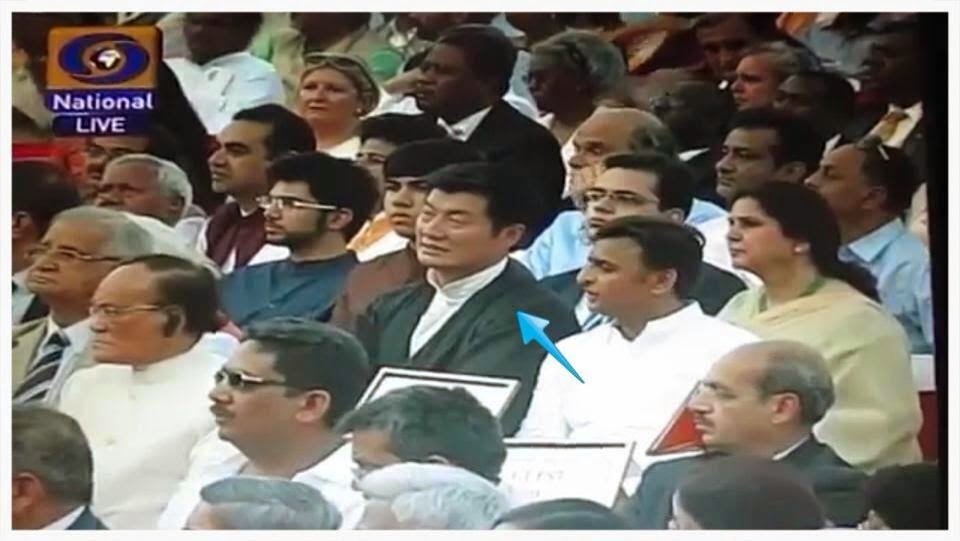 It was quite a pleasant surprise to see Lobsang Sangay, the Tibetan Prime Minister in exile (known as the Sikyong) amongst the invitees at the Rashtrapati Bhavan for the swearing in ceremony of the Modi Government.
It must be first, which may not please the Chinese.
Though not connected, I recently came across an interesting letter sent by the Ministry of External Affairs, Government of India to the Chinese Government. It is 51 years old.
It refers to the Constitution of Tibet promulgated by the Dalai Lama.

The Government of India have repeatedly made clear to the Chinese Government that there is absolutely no question of the Government of Indian giving support to any subversive political activities whatsoever by Tibetans, who have left their homes and come as refugees to this country. Inspite of this, the Chinese Government have continued to make slanderous and unfounded allegations against the Indian Government, and have now again accused the Indian Government of having supported political activity by Tibetans in India. The Government of India firmly repudiate these utterly untenable and false allegations.
Basing itself upon a News despatch of a foreign press agency, the Chinese Government have slanderously alleged that the Spokesman of the Indian Ministry of External Affairs has declared the publication of a draft Constitution of Tibet as an ‘exercise’. This is in keeping with the Chinese Government's practice of mischievously quoting statements out-of-context and even fabricating statements never made, so as to suit their own purposes. No press conference was held by the Spokesman of the Ministry about the Dalai Lama's proclamation of a new Constitution.
If there are any disturbances in Tibet, these are matters for the Chinese Government to deal with. It is absurd for the Government of China to blame the Government of India for any internal difficulties and to make the mischievous suggestion of the existence of an ‘Emigre Government’ in this country. Even the Foreign Press Report referred to in the Chinese note makes it clear that there is no change in Government of India's policy on this matter as will be seen from the following:
"Indian official spokesman dismissed as ‘imagination and fabrication’ Wednesday Chinese Communist allegation India fostering emigre Tibetan Government. There is no such Government and India has not changed her policy of not recognising any such Government', said spokesman for Ministry of External Affairs. He was commenting on Peking People's Daily editorial monitored in Tokyo."
The Government of India's policy in regard to India's relations with Tibet has been given in the Prime Minister of India's statement in Parliament as early as on April 27, 1959 where the Prime Minister stated that, the three main governing factors were:
(1)    the preservation of the security and integrity of India;
(2)    our desire to maintain friendly relations with China; and
(3)    our deep sympathy for the people of Tibet. That policy we shall continue to follow because we think that it is a correct policy not only for the present but even more so for the future. It would be a tragedy if the two great countries of Asia, India and China, which have been peaceful neighbours for ages past, should develop feelings of hostility against each other.
We for our part will follow this policy, but we hope that China also will do likewise and that nothing will be said or done which endangers the friendly relations of the two countries which are so important from the wider point of view of the peace of Asia and the world. The Five Principles have laid-down, inter alia, mutual respect for each other. Such mutual respect is gravely impaired if unfounded charges are made and the language of cold war used.
In regard to Tibetan refugees who had come to India, the Prime Minister then stated. “…we have also some Tibetan emigres in India. All of these deeply respect the Dalai Lama. Some of these have been exceedingly unhappy at developments in Tibet. No doubt they have anti-Chinese sentiments. We have made it clear to them that they will not be permitted to carry on any subversive activities in India and I should like to say that by and large they have acted in accordance with the directions of the Government of India".
This straight-forward and upright policy of the Government of India was spelt out once again in the statement of the Foreign Secretary to the Chinese Ambassador made on 23rd May, 1959, in reply to a statement by the Chinese Ambassador of 16th May, 1959, which had contained unwarranted attacks against the Government of India.
In the context of the above facts there can be no question of the Government of India having supported any form, of political activity directed against the People's Republic of China by the Tibetan population in India. The baseless and slanderous charges of ‘expansionism’ on the part of India are merely a Chinese pretext to carry on venomous anti-Indian propaganda for creating anti-Indian feelings and fomenting war hysteria among the people of the neighbouring Region of Tibet, with whom India has had a long-standing tradition of friendship and cultural affinity. The events since September 1962 show that far from India entertaining "expansionist dreams", it is China that has by her massive attacks and unwarranted aggression on Indian territory demonstrated her expansionist aims and inimical intentions against a friendly and peaceful neighbour who had done so much to assist and support her in various ways.
The Ministry of External Affairs avails itself of this opportunity to renew to the Embassy of the People's Republic of China the assurances its highest consideration.
Posted by Claude Arpi at 1:56 PM