The Shenyang J-11 in the Tibetan Sky

The Shenyang J-11 is a single-seat, twin-engine jet fighter based on the Soviet-designed Sukhoi Su-27. It is manufactured by the Shenyang Aircraft Corporation and operated by China's People's Liberation Army Air Force (PLAAF). The J-11/A is a fourth-generation jet fighter which, like the Russian Sukhoi, wants to be a direct competitor to US fourth generation fighters such as the F-15 Eagle and F-16 Fighting Falcon.
In 1995, China started to work on the J-11 after securing a $2.5 billion production agreement with Russia to build 200 Su-27SK aircraft using Russian-supplied kits.
Under the terms of the agreement, these aircraft were to be fitted with Russian avionics, radars and engines.
In 2004, Russian media reported that Shenyang co-production of the J-11 was stopped after only 100 planes had come out of the workshop.
What was cooking up?
Experts had an indication, mid-2002 the PLAAF had leaked photos of an upgraded multi-role version of the J-11.
Wikipedia says: "The indigenous J-11B variant incorporates various Chinese material modifications and upgrades to the airframe with improved manufacturing methods in addition to the inclusion of domestic Chinese technologies such as radar, avionics suites and weaponry,including anti-ship and PL-12 air-to-air missiles presumably for the role of a maritime strike aircraft. The alleged reason for the sudden stop in the production line of the J-11 was because it could no longer satisfy the PLAAF's requirements, due to elements such as the obsolete avionics and radar, which were structured for aerial missions."
In 2009, Rosoboronexport's General Manager Anatoli Isaykin announced: "Russia is going to investigate the J-11B, as a Chinese copy of the Su-27 and Sukhoi Company is partaking in the process."
In 2010, Rosoboronexport affirmed on their website that talks had started with the Chinese side, regarding the ongoing production of weapons that Russia considers as 'un-licenced'. Rosoboronexport expressed its concern over future sales of advanced Russian systems and components to China.
Further in March 2011, a joint Sino-Pakistani exercise, Shaheen 1, was conducted at a Pakistan Air Force (PAF) base. It involved several PLAAF  aircrafts and personnel. Photos of Pakistani pilots inspecting planes looking like the Shenyang J-11B fighters appeared on the Internet. The exercise lasted for around 4 weeks and was the first time the PLAAF had deployed to and conducted 'operational' aerial maneuvers in Pakistan with the PAF.
Was China trying to export the J-11 to its all-weather friends?
Now, the J-11 have been spotted in the Tibetan sky.
The caption on the Chinese site is: "Four armed J-11 fighters patrol the Tibet Autonomous Region in southwest China" 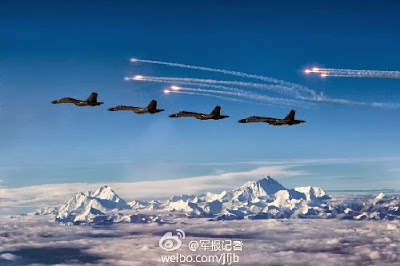 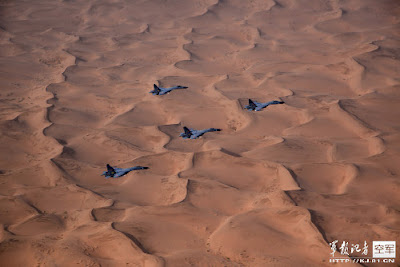 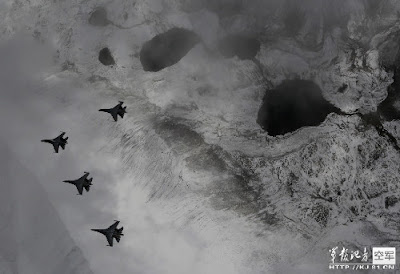 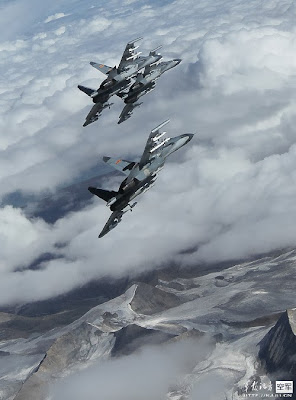 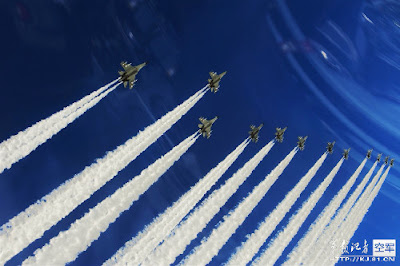 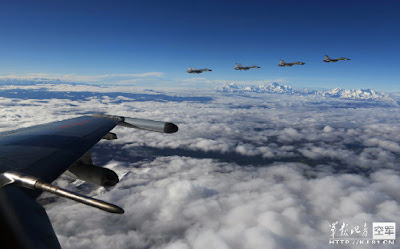 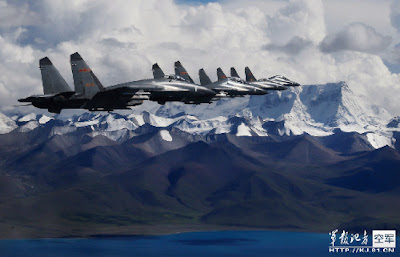 A reader commented (see comment below) that the Shaheen II joint  exercise between China and Pakistan were recently conducted in Xinjiang Militarily District of Lanzhou Military Area Command (military region).
The Hetian airbase would have been used for the exercises.
That is not far from the Daulat Beg Oldi and the Depsang Plain!
Posted by Claude Arpi at 5:27 AM

Recently Shaheen II a three week joint exercise was conducted in South XJ at Hetian AB. From 9/3/13 to 9/22/13.
http://www.janes.com/article/26693/pakistani-and-chinese-air-forces-participate-in-joint-shaheen-ii-exercises