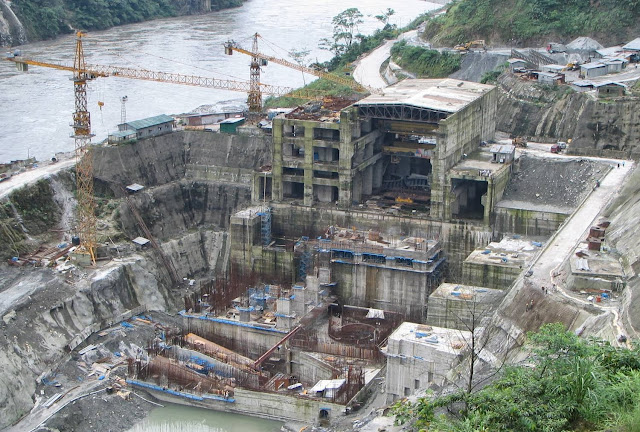 I have often written on this blog, 'dam is money'.
Most of my comments referred to Arunachal Pradesh, but as my article Uncertain Happiness published in The Statesman  on October 2 shows, the Land of Happiness, Bhutan is not exempted of the temptation of making money quickly.
But Arunachal and Bhutan have not the monopoly on the 'dam is money' policy.

Last week, The Hindu reported: "Sikkim could be in for a Goa-like scam of environmental violations with several hydroelectric projects coming up on the Teesta river basin without mandatory wildlife clearance, flouting Supreme Court orders, a team of the National Board of Wildlife (NBWL) has warned in a report to the Union Environment and Forests Ministry."
Why to quote mining in Goa and not dams in Uttarakhand, Himachal and Arunachal?
The NBWL is supposed to be the apex body on wildlife policy issues under the Wildlife Protection Act, headed by the Prime Minister.
Why divert the attention of the public on Goa while the same process of flouting environment clearances occurs for most of the hydropower plants in the North-East?
The Hindu explains the situation in Sikkim:

The court has mandated that all projects coming within 10 km of national parks and sanctuaries seek prior clearance from the board’s standing committee. After proponents of the NHPC’s 520-MW Teesta 4 applied for clearance, the board sent a team which found that the project would submerge forests in the eco-sensitive area of the Khangchendzonga National Park, besides causing other ecological damage. Worse still, the team found, private developers had already begun construction on several projects in the river basin, in the vicinity of protected wildlife areas, without mandatory clearances. Those coming up illegally are the Teesta III, Dik Chu, Panan, Tashiding and Ting-Ting hydroelectric projects, according to the team. The team members tried to elicit comprehensive information from State officials but were stonewalled and left to ascertain the facts for themselves.

The NBWL noticed that in many cases, the river Teesta could practically run dry through a large part of its course in the State. A 'tragic consequence' of such large-scale diversion would be that between Teesta III and Teesta VI project sites most of the water would flow through the tunnels rather than in the actual course of the river.
Apparently, the NBWL team has recommended a comprehensive review of all existing and proposed projects in the basin and a thorough investigation into the projects coming up illegally in Sikkim as well as immediate suspension of activity in the basin until the government thoroughly investigated the illegalities and looked into clearances for each project.
What about the other basins?
The NBWL should read the report Subansiri Basin Study – Another Chapter of Environment Subversion in Northeast prepared by the South Asia Network on Dams, Rivers and People, they will understand that it is not necessary to quote the mining in Goa, constructions without clearance are happening all over the North-East.

Uncertain Happiness
The Statesman
October 2
Unfortunately  for  the  Himalayan  Kingdom,  the transition from traditional temples to 'modern' ones is not smooth. Since July this year, the right side of a mega project, the Punatsangchhu-I Hydroelectric Project (PHP-I), is sinking and huge rocks were found moving down   towards    the    spot    under   excavation of the base of the dam, says Claude Arpi.