Casting a wall of copper and steel on India's frontier

The Chinese Defence Minister, General Chang Wanquan visited the Xinjiang Military District dealing with the Aksai Chin area and India's border in Ladakh.
According to Xinhua, the Minister "called for a strengthened border and national defense in northwest China's Xinjiang."
He spent an entire week on an 'inspection tour' of the region.
Can you imagine AK Antony spending a week in Arunachal and visiting the forward posts?
One can always argue that it is impossible, he would have to walk too much, as India has no road there.
General Chang took the time to visit military units "to further consolidate border defense and cast a wall of copper and steel in the frontier."
What does it mean for India?
Just that China will be ready to any eventuality and the PLA will maintain its pro-active posture in the area.
The Defence Minister told the military units "to lay a solid basis for Xinjiang's long-term peace and stability by consolidating political power in grassroots governments and stepping up the fight against encroachment, separatist and terrorist activities."
Apart from the border with India, the Xinjiang Military District has to deal with the restive local Uyghurs who are resentful of the 'ethnic' policies imposed by Beijing. 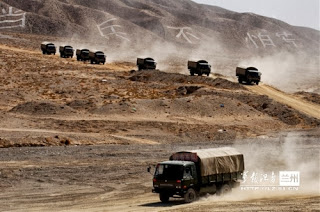 Wang explained to the Chinese troops that "Xinjiang's stability was of great significance to safeguarding national unity, state security and the country's social stability."
Regarding the border with India, Xinhua reported: "Military units were told to put border and national defense into prominent place and contribute to the consolidation of the defense in China's borders."
And of course, the usual standing order, the PLA is "required to operate under the instructions of the Communist Party of China Central Committee, the Central Military Commission (CMC) and CMC Chairman Xi Jinping".
Is the PLA sometime not listening to Chairman Xi? Not impossible!
Interestingly, General Wang asked the local commanders to take 'initiatives in operations'. It is quite ominous for India; but nobody seems to be worried on this side of the border; nobody is even probably aware.
Xinhua said: "The minister demanded military officers to strengthen strategic thinking, carry forward construction projects as well as take initiatives (in operations)."
One wishes the local Indian commanders would sometimes have the same opportunity to 'take initiatives'.
In the meantime, the Indian press reported that India and China are expected to sign Border Defence Cooperation Agreement (BDCA) during Prime Minister Manmohan Singh's three-day visit to China starting from October 22.
Apparently, the Cabinet Committee on Security will today discuss the border pact, whose objective is "to prevent face-offs between the troops of the two countries along the over 4,000 km disputed Line of Actual Control (LAC)."
Will it really prevent anything?  Probably not.
Posted by Claude Arpi at 6:59 AM