The strange case of the 'Chinese' Panchen Lama

Xinhua reported yesterday that the (Chinese) 'Panchen Lama concluded [his] religious activities in Tibet'.
Quoting sources in the regional [Lhasa] government, the official news agency said: "The 11th Panchen Lama, Bainqen Erdini Qoigyijabu [Gyaltsen Norbu] concluded his religious activities in southwest China's Tibet Autonomous Region."
The report continued: "The 23-year-old Panchen Lama, one of the two most revered living Buddhas in Tibetan Buddhism, has performed religious rituals, including sutra interpretations and giving blessings, for thousands of Tibetan Buddhists at several monasteries in the region since August 27."
Guess who is the other most revered 'Living Buddha' in Tibetan Buddhism?
Beijing does not like to write his name or even hear his name, though his status seems to be acknowledged.
Even more interesting, Xinhua reveals: "The Panchen Lama lived in seclusion at the Zhaxi Lhunbo Lamasery [Tashilhunpo monastery] in Xigaze [Shigatse] Prefecture, the traditional residence of reincarnated Panchen Lamas, from Sept. 12 to Oct. 7."
Why in 'seclusion' when he is on his 'annual inspection tour'?
That is a difficult question to answer.
According to earlier reports, Gyaltsen Norbu was staying at the Dechen Phodang, the 'summer' residence of the Panchen Lamas, outside the main Tashilhunpo monastery.
The caption of a series of photos of Gyaltsen Norbu performing a puja was: "Photo taken on October 8th, 2013, shows that the 11th Panchen Lama, Bainqen Erdini Qoigyijabu, a spiritual leader of Tibetan Buddhism, leads the fire puja in Deqing Gesang Phodrang [Dechen Phodang], Shigatze of Tibet Autonomous Region. Fire puja, a special support ritual based on Tibetan Buddhism, is used to pray for peace or release souls from purgatory by burning tribute, grain, branch to support deities."
Without commenting on the 'souls released from the purgatory', the Chinese-selected Panchen Lama does not seem to be surrounded by many monks. Only a few attendants appear on the pictures. 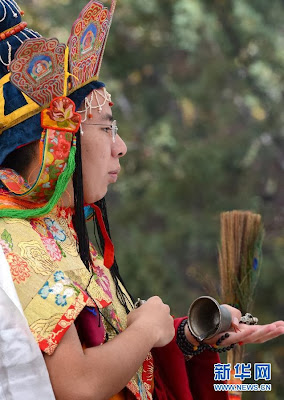 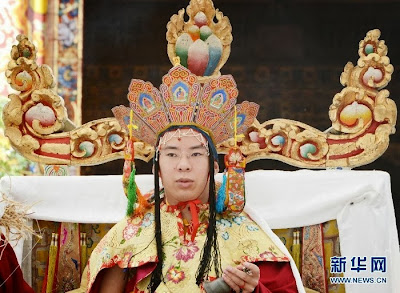 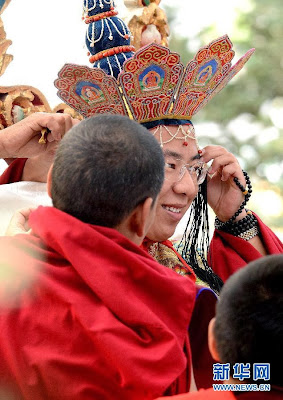 Xinhua reminds us: "As a member of the Standing Committee of the Chinese People's Political Consultative Conference National Committee, China's top political advisory body, the Panchen Lama also held discussions with members of Tibetan religious circles and visited local farmers and schools to gather their opinions on social and religious issues."
No photos were published of these meetings and encounters.
Did they really take place?
On October 10, Gyaltsen Norbu visited the Sakya monastery.
Here again, the crowds seem sparse, not to say non existent.
Apart from the fact that the Chinese news agencies informed us that Sakya was built in 1073 and 'as long enjoyed almost the same fame as the Dunhuang Grottoes for its large collection of Buddhist scriptures, valuable porcelain and vivid wall paintings', not much is said of the Lama's visit. He just looked at some palm-leaf manuscripts of Buddhist texts, he met a few devotees and 'worship' inside one of the temples. 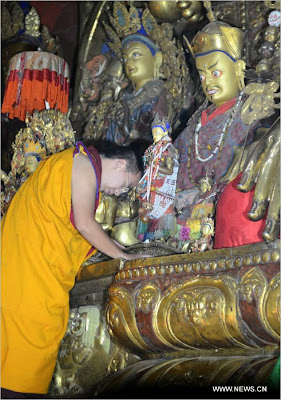 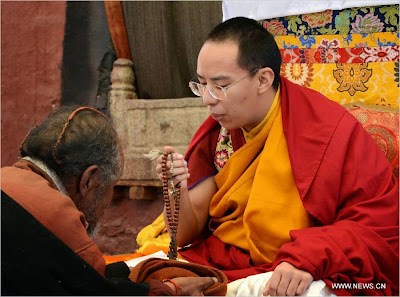 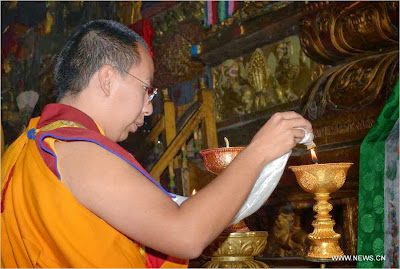 More interesting is this photo, the Sakya monastery looks deserted.
Where are the crowds? The few people in the background look more like security agents, than religious followers. 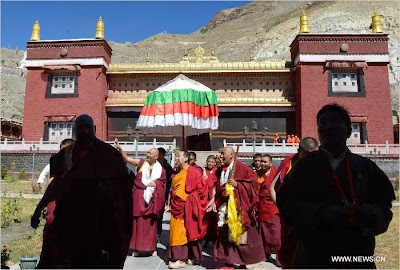 I had already reported  Gyaltsen Norbu's other public appearance on this blog. It was at the end of August in the Jokhang.
At that time, he had discreetly met with the TAR Party officials. This was not reported in the English media.
The question is 'why such a low profile visit/inspection tour'?
After all, Gyaltsen Norbu was supposed the main tool for the Chinese propaganda in Tibet.
Has something gone awry?
Remember the interview of Prof. Jin Wei of the Central Communist Party School published by a Hong Kong weekly.
She said: "Under the current circumstances, there will be 'Twin Dalai Lamas', with one reincarnation recognized abroad and one domestically, leading to more complicated issues, having great impacts on the stability and security of the Tibetan region. If the 'Dalai Lama impasse' can be broken, we should fight to have the Dalai Lama reincarnation arise within the country. Although we can use 'Drawing Lots from the Golden Urn' to prevent the reincarnation from arising overseas, there is a historical precedent for Living Buddhas designating their own successors. We must use every effort to avoid the embarrassment of the 'Twin Panchen Lama' event."
She admits that the 'Golden Urn' process was manipulated (this has been described in detail by Arjia Rinpoche, who participated in the 'ceremony'), but now, the carefully-selected Panchen Candidate seem not trustworthy for the Chinese authorities.
After all, Gyaltsen Norbu is a Nagchu boy and if everything had worked as planned by the Party, he should have been the one to go and extinguish the fire in the restive Prefecture.
He did not visit Nagchu because his visit would have probably made things worse for the Communist regime.
In other words, the 'selection' process through the Golden Urn may reveal itself a complete flop for Beijing in a near future. It is probably why 'thinkers' such as Prof. Jin Wei have started thinking of other solutions.
In the meantime, the Panchen Lama selected by the Dalai Lama remains under house arrest.
On September 26 and 27 in Geneva, the UN Committee on the Rights of the Child reviewed China’s record, including in Tibet, as part of its compliance review under the UN Child Rights Convention.
International Campaign for Tibet reported: "The Committee questioned the Chinese delegation on the whereabouts of Gedhun Choekyi Nyima, who was disappeared by Chinese authorities in 1995 after he was recognized by the Dalai Lama as the 11th Panchen Lama. The Committee asked if China’s contention that the Panchen Lama had been given higher education and living a happy life had been confirmed by an independent authority, as had already been asked by the Committee in 2005. The Chinese government refused to answer this question".
One more embarrassment for Beijing and a tragic situation for Gedhun Choekyi Nyima.
Posted by Claude Arpi at 7:41 AM