Last May, Meng Jianzhu, a member of the all-powerful Communist Party’s Politburo, in-charge of the security in China visited Zhejiang Province. He spoke to the CCP’s cadres about developing the 'Fengqiao Experience'.
Recently, The People’s Daily mentioned again the 'Fengqiao Experience', saying that it is worth being ‘popularized’.
What is this Fengquiao Experience?
The mouthpiece of the Party explains that today China faces a serious problem: “how to correctly handle the relations between reform, development and stability is a major question put to us by our times.”
Fengqiao is a town in Zhuji City in Zhejiang Province.
According to The People’s Daily, in Fengquiao "the Party and government bear their respective responsibilities for definite work, relying on the masses, diffusing contradictions, safeguarding stability and promoting development to ensure that minor problems can be settled without going out of the village, major problems can be resolved without going out of the town and contradictions are not passed on to the leadership".
That sounds good.
The Party's conclusion is “the experience of Fengqiao is worth being summed up and popularized”.
One can only agree, but what about Nagchu mentioned in my posting yesterday?
The Fengqiao experience does not seem to have percolated that deep on the Tibetan plateau.
In the case of Fengqiao, the Party’s propaganda believes that “the success of the ‘Fengqiao Experience’ lies in the fact that local cadres and masses have always regarded economic development and social progress as their unitary objective of struggle,” adding: “They have conscientiously intensified their efforts for socialist cultural and ethical progress and strengthened construction of democracy and the legal system in grass-roots units, they have made earnest efforts to safeguard social and political stability and have blazed a new trail for the synchronous advance of stability and development, the simultaneous achievement of a comfortable life and good public order and the coordinated development of economy and society.”
Apparently, the cadres and the masses are not on the same length wave in Nagchu; they don’t agree on how to ‘develop’ the Prefecture.
The new trail is simply not blazing in Nagchu.
But there is worse.
The repression against the masses in Nagchu is now extending its wings to Lhasa; the common men of Nagchu are now ‘monitored’ when they visit the capital Lhasa.
The Tibetan Centre for Human Rights and Democracy affirms: “Days after the violent crackdown on local Tibetans in Diru County in Nagchu Prefecture, Chinese authorities in Lhasa City have issued a notification to various ‘convenience police posts’ in Lhasa and Nagchu to monitor the movement and activities of Nagchu Tibetans.”
Police officers are supposed to use secret codes for “relaying information in real time about the movement and activities of Tibetans visiting Lhasa from Nagchu.”
An official notification mentions that police officers have to use secret codes for Diru County, Drachen County and Sog County of Nagchu Prefecture while sending information about individuals from these areas.
The ‘Nagchu Experience’ will bring Tibetans from Ngachu visiting Lhasa under 24-hour surveillance.
TCHRD says: “Police officers manning ‘convenience police stations’ would constantly share information in real time about the whereabouts of Nagchu Tibetans in Lhasa, making it convenient for the authorities to immediately arrest potential ‘trouble makers’.”
TCHRD translated the Notification issued by the Old Lhasa Neighbourhood Committee on Octiber 3:

To All Convenience Police Stations in [Lhasa’] Old Neighbourhood,
To thoroughly implement the spirit of stability maintenance meeting held in Lhasa City and to normalise the stability maintenance regulations in the old neighbourhood, following instructions must be followed when using secret codes to identify and share information about three eastern counties in Nagchu Prefecture: 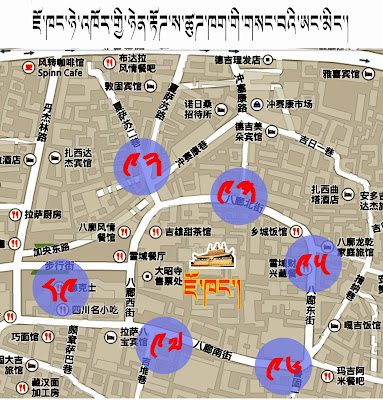 How to Use Secret Codes: When using secret codes [to identify Nagchu Tibetans], Nagchu men must be called “male tourists” while Nagchu women must be called “female tourists”. Likewise, secret code for Biru County is “A”; secret code for Suo County is “B”; and secret code for Bachen County is “C”.
How to Send Secret Codes: For instance, if a convenience police station no. 89 learns that three male individuals from Diru County have entered the area under convenience police station no. 91, police station no. 89 must relay this information to station no. 91 through mobile handsets by saying: “Station No. 91, three male tourists from “A” have entered your area, please extend hospitality!”
First, police checkpoints in the inner circle of Barkhor must keep track of Nagchu Tibetans in areas under their jurisdiction. The movement and activities of Nagchu Tibetans must be monitored all through their stay in this area. If [Nagchu Tibetans] leave this area for another, police officers in the previous area must inform a police checkpoint closest to the next area where they have entered.
Second, security checkpoints located in the outer circuit of Barkhor must monitor the movement and activities of Nagchu Tibetans and share information through mobile handsets.
Third, be careful when using secret codes through mobile handsets to monitor the above mentioned individuals. And suspicious persons must be subjected to thorough search and vigilance.

This is called the ‘Nagchu Experience’.
Can't a superpower like China find a better way to deal with its masses?
And why can't the Chinese Panchen Lama (Gyaltsen Norbu). who is a native of the Lhari County in Nagchu uses this good offices to 'pacify' the situation?
He was last seen in Shigatse, outside the Tashilhunpo monastery (in Dechen Phodang) performing special 'pujas for peace'. But he is probably himself 'monitored'.
Posted by Claude Arpi at 7:29 AM