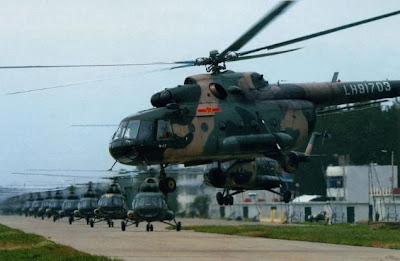 Why is the Army always denying or minimizing incidents of Chinese incursions into the Indian territory?
Why does the Naval Chief need to comment on this? Has the Sea reached Gangtok or Nathu-la?
One point is sure, the Chinese will continue to intrude as long as the Indian Army does not take a firmer position or play the same game.


Chinese helicopters intrude into Indian air space in Leh area
March 31 2009
Leh (J&K): Two Chinese helicopters have reportedly violated the Indian air space in recent months in Leh area of north Jammu and Kashmir during which they air-dropped some canned food in barren land at Chumar, northeast of this Himalayan town, along the border.
The MI series helicopters were reported to the nearby defence post by residents of this high altitude area living along the Pangong lake, located in the lap of majestic hills, prompting the Army Aviation Corps to rush its Cheetah and Chetak helicopters.
However, they could only find tell-tale signs left by Chinese helicopters which hovered in the Indian territory for nearly five minutes dropping the food material on June 21 this year, sources said.
When contacted, Army spokesperson for Udhampur-based Northern Command said that â€œthere was a report of a helicopter flying in the area south of Chumar, where India and China have differences in perception on the Line of Actual Control. It was reported by grazers.â€�
A confidential defence document accessed by PTI shows that Chinese helicopters entered into Indian air space along Damchok area and Trig Heights in Ladakh and air dropped canned food containing frozen pork and brinjal, which had passed the expiry date.

Army denies reports of Chinese intrusions at Nathu-La
CNN-IBN
August 27, 2009
INDIA CHINA TRADE ROUTE: A snow-covered Indian army camp is seen at Nathu-La, 55 km north of Gangtok. New Delhi: Was there a border face-off between Indian and Chinese troops at Nathu-la, Sikkim? The Indian Army has denied reports of any face-off in sections of the media. The Army has also denied reports of a Chinese intrusion and has refuted rumours of an Indian troop build up.
The Army says sections of National Highway 1 have not been closed down to facilitate troop movement, but that the highway is blocked because of landslides.
Nathu-La, at a height of more than 14,000 feet, last saw action in 1962. It reopened to border trade only two years ago.
So-called intrusions are common along the disputed border by both sides who try and keep alive respective territorial claims, but the border has been largely peaceful since the 1990s.
Meanwhile, Chief of Naval Staff, Admiral Suresh Mehta, has denied reports of Chinese incursions into Indian territory on the Northeastern border.
"I don't know where you have heard that story from," he said when asked about troop movements and any intrusions.