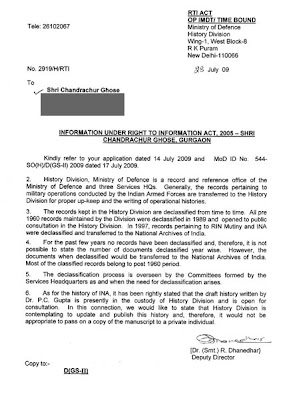 Interesting posting read on endthesecrecy.com Website.
The babus are clearly not serious. To transfer to the National Archives of India does not mean anything, files can remain classified.
And what about the MEA?
They are sleeping on some files which are more than 80 years. A small mercy, the Bristish took away all the pre-independence files and today they are available to the public in the India Office Records in London. But why to go to London to study Indian history?

No declassification in MoD in last few years
4 August, 2009: The Ministry of Defence has not declassified any record in last few years. This startling admission has been made by the History Division of the Ministry in a response to our RTI query, which asked them to detail "year-wise number of documents declassified during the past five years".
History Division is the record and reference office of the Ministry of Defence and three Services HQs. Generally, the records pertaining to military operations conducted by the Indian Armed Forces are transferred to the History Division for proper up-keep and the writing of operational histories.
"For the past few years no records have been declassified and, therefore, it is not possible to state the number of documents declassified year wise," writes Dr R Dhanedhar, Deputy Director of the Division, adding "the documents, when declassified, would be transferred to the National Archives of India."

"When" is the big question. Detailing what appears to be last major declassification drive undertaken by the Ministry, Mrs Dhanedhar informs that "all pre-1960 records maintained by the Division were declassified in 1989 and opened to public consultation in the History Division." That is, twenty years later one still can't access them in National Archives and going to History Division is not as easy an option.
Citing another case of declassification, Dhanedhar states that "in 1997, records pertaining to RIN Mutiny and INA were declassified and transferred to the National Archives of India." That, one recalls, has to do with the birth centenary celebration of Subhas Bose and the crying need to declassify something or the other about him. Most papers about Bose's reported detail remain classified.
The Division is contemplating to "update and publish" the somewhat controversial draft of the history of Indian National Army (INA) by Dr P C Gupta, and, for this reason, the Division thinks it "would not be appropriate to pass on a copy of the manuscript" to us.
In response to our RTI application, the Division has further stated that "the declassification process is overseen by the Committees formed by the Services Headquarters as and when the need for declassification arises."
But there are RTI questions that Division either did not answer or dodged. This one for example:
Posted by Claude Arpi at 6:21 AM