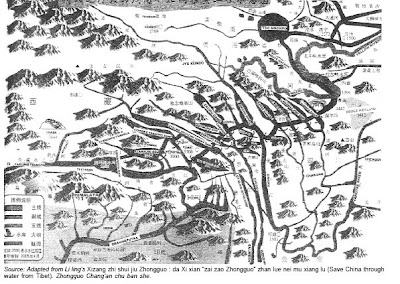 I have often written about the Chinese plans to divert the Brahmaputra and the two possible options. The first one would be a mega-dam near the Great Bend of the Brahmaputra, North of the McMahon Line while the other, promoted by Li Ling and some retired PLA generals is to start the diversion near Tsetang, South of Lhasa.
This Google map
show some of proposed dams in the Tsetang some of proposed dams in the Tsetang region. Though the Chinese may have not yet decided to trigger a water war with India, this could be a first stage for the project of the century. But for the time being, Beijing probably prefers to keep all options opened.