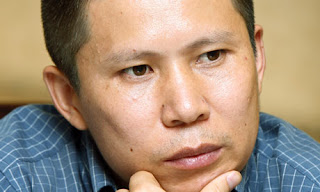 I had reported the arrest of Xu Zhiyong, the Chinese Human Rights lawyer. His organisation had prepared a report on the 2008 unrest in Tibet. Now it is the turn of Zhuang Lu, his secretary to disappear. The leadership in the Forbidden City is becoming more and more intolerant. How can China expect to be considered as a Great Power by the rest of the world?

Office worker for Xu Zhiyong, who himself faces trial for tax evasion, has not been seen for three weeks

Xu Zhiyong is a co-founder of Gongmeng, a legal group which has dealt with some high-profile human rights cases. No one in China has heard of Zhuang Lu, which is hardly surprising. Plainly dressed and introverted, the 27-year-old office assistant completed her mundane daily tasks – booking tickets, paying bills – with minimum fuss. Then, three weeks ago, she disappeared.
Family and colleagues believe she is being held in a detention house in Beijing. Like her boss Xu Zhiyong, a prominent human rights lawyer who has fought a string of high-profile cases, she was taken from her home at dawn on 29 July by security officials. But unlike Xu's detention, which has made headlines internationally, her disappearance has gone unnoticed outside her immediate circle.
"Information about her has always been out. But because the main focus has been on Xu, not many people have noticed her case," said their colleague Yang Huawei.
Xu – who was formally arrested for tax evasion this week – is well known for his tenacious pursuit of sensitive cases such as deaths in custody. Shortly before his disappearance he was featured in Chinese Esquire. He co-founded the legal organisation Gongmeng, also known as the Open Constitution Initiative, which has helped the families of children made ill by tainted baby milk powder and issued a report criticising the handling of demonstrations in Tibetan areas.
In comparison, Zhuang's work at Gongmeng was essential but inconspicuous - the administrative grind without which no organisation can run. She is "thin and small, plainly-dressed, introverted, not talkative," wrote Teng Biao, another of the founders.
But though she appeared vulnerable to Teng, "one thing proved that she was not weak and maybe that is the most shining thing she did [at] Gongmeng," he added.
"In 2008, when summer was replacing spring, she was invited by police for a cup of tea. The national security people asked her to report on our work to them and told her that she would benefit. But Zhuang Lu refused. She told us about it. She had the courage and [they] must have been very angry and we are not sure whether today's 'serious result' has anything to do with them or not."
In his blog posting – since erased by censors – he described how she wept when officials came to shut the Gongmeng legal centre in mid-July.
"Such a gentle and honest girl was kidnapped by Big Brother without any legal justification," he added.
Xu's case comes amid a crackdown on activist lawyers. Zhuang's shows how others can be drawn into such investigations.
"I guess it is possible that they took her in the hope of getting some testimony from her against Xu," Teng told the Guardian.
Nicholas Bequelin, Asia researcher for Human Rights Watch, describes that as "standard operating procedure".
"It is also, of course, a way of putting pressure on Xu, because he is responsible not only for himself. Police like to make threats about consequences for relatives and people around [detainees] and he doesn't have family," Bequelin added.
"This is scaring people who work for NGOs. They are thinking it's not only the boss who can be taken away; officials can also go for the 'small' people."
Zhuang and Xu were due to meet the tax bureau on the day they disappeared. Gongmeng's problems began when authorities slapped a 1.2m yuan (£100,000) fine for unpaid taxes on it last month. Its founders say it paid slightly late but in full and points out that the penalty is five times larger than the tax bill. Staff who tried to pay off some of the fine after Xu's detention were told they could not do so because he had not signed papers to appoint them as legal representatives.
Xu has now been formally arrested, allowing him access to lawyers, but Zhuang is still in limbo. Staff at the detention centre where she is thought to be held told the Guardian they were too busy to speak when asked about her case.
Zhuang's father, who rushed to the capital when he heard of her detention, has returned home to southern China without authorising lawyers to act for her. Now, like her colleagues, he waits anxiously for her return.
Posted by Claude Arpi at 2:40 PM