A Revolution under religious Flag 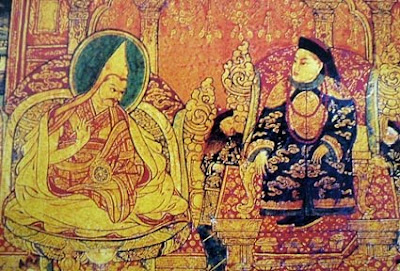 For centuries, the Lamas of Tibet (on the picture, the Fifth Dalai Lama with the Chinese Emperor during the 17th century) have provided spiritual leadership to China. One can envisage that this situation could happen again. Once in an interview the present Dalai Lama told me that he always dream to perform one day the Kalachakra initiation on the Tienanmen Square. It is perhaps the best way to keep China united.

Moscow, 13 August, Intrefax - China lacks social stability which may result in a forced change of the regime under religious slogans, world's best known futurologist Alvin Toffler believes.
According to his scenario, "local religious acts of protest shall grow into a gigantic mass revolt" in China.
"It will be the major threat for the government, because the number of Chinese people affected with religion grows with a cosmic progression," Alvin Toffler said in an interview published Thursday by Argumenty Nedeli weekly.
Toffler forecasts the rise of "Chairman Mao II, a charismatic leader who will use public unrest to sweep away the current Chinese government and establish a rule which the West cannot even imagine."
"This will not be a Mao-communist or even Mao-capitalist. The country seeking for something to replace the quasi-religion of Marxism will accept Mao who is able to unite peasants, workers and the Third Wave young people under the religious banner," Toffler said.
According to him, Christianity may become such a religion "or, most likely, some kind of belief bred by sects flourishing across the country in abundance."
"After the seizure of the Zhongnanhai (the central government headquarters in Beijing - IF) the religious fanatics will take control over nuclear weapons. The consequences may be most unpredictable," Toffler noted.
Posted by Claude Arpi at 6:33 AM