China Should break up the Indian Union? 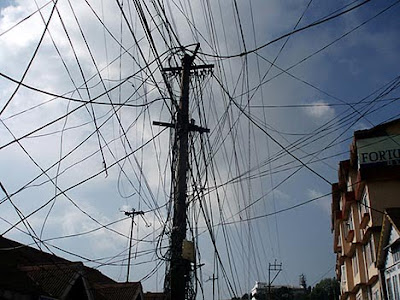 For decades, some Chinese have been dreaming of 'breaking up' India! But it is an easy thing to break up India. It will probably easier and faster to break up China, because as the title suggest, India is a Union of States: a voluntary Union. It is not the case of China which has forcibly taken control of two-third of 'its' territory by brutal force! Further, we have so many parties in India that even the EC has lost counts, China has only ONE. It makes a huge difference; it is a terrible weakness for the Middle Kingdom.
And perhaps more than anything else, China fears 'Chaos', while India loves it! China should learn that India is so chaotic that it is unbreakable


China Should break up the Indian Union, suggests a Chinese Strategist
D.S.Rajan,
August 9, 2009
Almost coinciding with the 13th round of Sino-Indian border talks (New Delhi, August 7-8, 2009), an article (in Chinese language) has appeared in China captioned “If China takes a little action, the so-called Great Indian Federation can be broken up” ( Zhong Guo Zhan Lue Gang, www.iiss.cn , Chinese,8 August 2009). Interestingly, it has been reproduced in several other strategic and military websites of the country and by all means, targets the domestic audience. The authoritative host site is located in Beijing and is the new edition of one, which so far represented the China International Institute for Strategic Studies (www.chinaiiss.org).

Claiming that Beijing’s ‘China-Centric’ Asian strategy, provides for splitting India, the writer of the article, Zhan Lue (strategy), has found that New Delhi’s corresponding ‘India-Centric’ policy in Asia, is in reality a ‘Hindustan centric’ one. Stating that on the other hand ‘local centres’ exist in several of the country’s provinces (excepting for the U.P and certain Northern regions), Zhan Lue has felt that in the face of such local characteristics, the ‘so-called’ Indian nation cannot be considered as one having existed in history.

According to the article, if India today relies on any thing for unity, it is the Hindu religion. The partition of the country was based on religion. Stating that today nation states are the main current in the world, it has said that India could only be termed now as a “Hindu Religious state’. Adding that Hinduism is a decadent religion as it allows caste exploitation and is unhelpful to the country’s modernization, it described the Indian government as one in a dilemma with regard to eradication of the caste system as it realizes that the process to do away with castes may shake the foundation of the consciousness of the Indian nation.

The writer has argued that in view of the above, China in its own interest and the progress of whole Asia, should join forces with different nationalities like Assamese, Tamils, and Kashmiris and support the latter in establishing independent nation-states of their own, out of India. In particular, the ULFA in Assam, a territory neighboring China, can be helped by China so that Assam realizes its national independence.

The article has also felt that for Bangladesh, the biggest threat is from India, which wants to develop a great Indian Federation extending from Afghanistan to Myanmar. India is also targeting China with support to Vietnam’s efforts to occupy Nansha (Spratly) group of islands in South China Sea. Hence the need for China’s consolidation of its alliance with Bangladesh, a country with which the US and Japan are also improving their relations to counter China. It has pointed out that China can give political support to Bangladesh enabling the latter to encourage ethnic Bengalis in India to get rid of Indian control and unite with Bangladesh as one Bengali nation; if the same is not possible, creation of at least another free Bengali nation state as a friendly neighbour of Bangladesh, would be desirable, for the purpose of weakening India’s expansion and threat aimed at forming a ‘unified South Asia’.

The punch line in the article has been that to split India, China can bring into its fold countries like Pakistan, Nepal and Bhutan, support ULFA in attaining its goal for Assam’s independence, back aspirations of Indian nationalities like Tamils and Nagas, encourage Bangladesh to give a push to the independence of West Bengal and lastly
recover the 90,000 sq km. territory in Southern Tibet.

Wishing for India’s break-up into 20-30 nation-states like in Europe, the article has concluded by saying that if the consciousness of nationalities in India could be aroused, social reforms in South Asia can be achieved, the caste system can be eradicated and the region can march along the road of prosperity.

The Chinese article in question will certainly outrage readers in India. Its suggestion that China can follow a strategy to dismember India, a country always with a tradition of unity in diversity, is atrocious, to say the least. The write-up could not have been published without the permission of the Chinese authorities, but it is sure that Beijing will wash its hands out of this if the matter is taken up with it by New Delhi. It has generally been seen that China is speaking in two voices – its diplomatic interlocutors have always shown understanding during their dealings with their Indian counterparts, but its selected media is pouring venom on India in their reporting. Which one to believe is a question confronting the public opinion and even policy makers in India. In any case, an approach of panic towards such outbursts will be a mistake, but also ignoring them will prove to be costly for India.
(The writer, D.S.Rajan, is Director of Chennai Centre for China Studies, Chennai, India, email: dsrajan@gmail.com).
Posted by Claude Arpi at 5:46 AM

Email ThisBlogThis!Share to TwitterShare to FacebookShare to Pinterest
Labels: Breaking Up, China, India