Revolt in the New Dominion

Here is one of my two articles published in the latest issue of the Indian Defence Review (Issue: Vol 24.3 Jul-Sep 2009). This article is also on line on the Reviews' website.

Revolt in the New Dominion
It was a few days only after I had written an article on the instability of the situation in China that the news flashed that in Urumqi, capital of Xinjiang (The New Dominion in Chinese), violence had erupted resulting in at least 156 people dead and more than 1,000 wounded.
The background of the bloodiest-ever riot in the restive is still not clear. Apparently, it started with a peaceful protest which later turned violent. Uygurs students were protesting against the killings of two Uygurs by Han Chinese in a factory in South China.
At one point, the crowd (between 1,000 to 3,000 people according to agencies, reports), angered by the brutal reaction of the People’s Armed Police (PAP), started overturning vehicles, attacking houses and clashing with the police. A few hours later, the Chinese TV began showing images of the riots.
According to Wu Nong, a spokesperson for the Xinjiang provincial government, 260 vehicles were attacked or set on fire and 203 houses damaged. These figures seem quite astonishing. The number of dead or wounded and the material damage appear to be extraordinarily high compared to the number of participants.

Tensions are not a new phenomenon in a province which has been flooded by millions of Han settlers over the past decades. Part of the Republic of East Turkistan till 1949, the Uygurs, Muslims of Turkish origin have sporadically demonstrated their resentment against Han colonization. Today the overwhelming majority of Urumqi’s 2.3 million inhabitants are Chinese.
The Communist Party’s local satraps were quick to blame the incident on a ‘foreign’ hand. Xinjiang CCP boss and Politburo member, Wang Lequan declared that the riot in Urumqi showed the violent and terrorist nature of the separatist World Uyghur Congress leader (and business woman) Rebiya Kadeer.
When unrest had erupted in Tibet in March 2008, the Dalai Lama was similarly called a ‘wolf in a monk’s dress’ by Zang Qingli, the Tibet Party Chief. 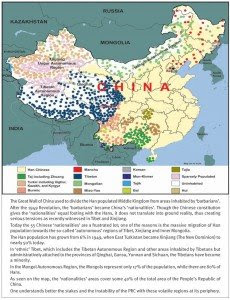 In an interview with Xinjiang TV, Wang said that “the terrorist, separatist and extremist forces cheated the people to participate in the so-called Jihad”. Though CCTV footages showed more ordinary citizens than hardcore jihadis, Wang’s conclusion was: “All Party members should take the strongest measures to deal with the enemies’ attempt at sabotage and keep regional stability”.
With tens of thousands of PAP called in as reinforcements in the New Dominion (and President Hu Jintao rushed back from Italy without attending the G8 Summit), there is no doubt that ‘extreme measures’ will be taken!
Two days after the incident, Beijing endorsed Wang’s position. The People’s Daily commented: “The 63-year-old Kadeer is likened to the Dalai Lama … the so-called ‘peaceful demonstration’ was staged on the Urumqi streets in the form of the most inhumane atrocities too horrible to look at. Perhaps, it is none other than Rebiya Kadeer herself who knows fully well why it is so - simply because she did as much, or more than, as the Dalai Lama and his clique to sow resentment among the ethnic Uygur people.”
It was categorically denied by Kadeer who in an op-ed in The Wall Street Journal said: “I unequivocally condemn the use of violence by Uygurs during the demonstration as much as I do China’s use of excessive force against protestors.”
However, according to the People’s Daily, China’s official mouthpiece, the Xinjiang Autonomous “enjoys a time-honored history as a civilized settlement with different ethnic groups living in a compact community and harmony.”
This is the crux of the matter, because for decades, there is more hatred and distrust than ‘compact harmony’ between the Uygur and Han populations.
Unless the new Emperors in Beijing find a sensible solution (such as the one advocated by the Chinese Layers) to the issue, chaos will prevail in the Middle Kingdom.
Posted by Claude Arpi at 5:58 AM