An Indian Consulate in Lhasa? 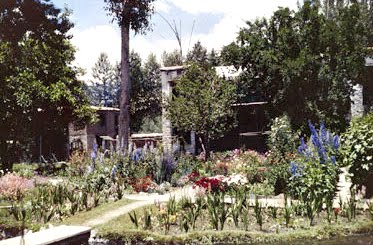 Strange! Strange! Strange! The Chinese sent a probe about an Indian Consulate to be opened in Lhasa. It was denied by the MEA and later by the spokesman of the Chinese Foreign Ministry. What was the point in sending this probe? It was recently reported that traders using the centuries-trade route crossing into Tibet at Lipulekh-la have only imported Rs 73000 worth of goods this year. The business over Nathu-la is not flourishing either (Rs. 9 lakhs in July after two months lull). Then what is the point to open a Consulate in Lhasa? The pilgrims to Kailash-Manasarovar do not need a Consulate to reach the holy mountain. Beijing probably wants to 'balance' the negative reports in the press about the deterioration of the bilateral relations with Delhi. Is there anything else? The future will tell us. I am told that the Dekyi Linkga (on the pictures), the former residence of the British (and then Indian after 1947) heads of the Indian Mission in Tibet still exists and is used by the Army or the paramilitary force. It was one of the most beautiful residences of the Tibetan capital with lovely gardens. 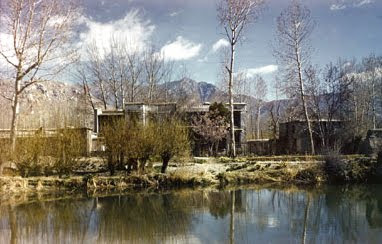 IANS 25 August 2009, LHASA: More than 40 years after bad blood between India and China closed down the Indian consulate in Tibetan capital Lhasa, a Chinese foreign ministry official says New Delhi can re-open it any time it wants. "India can set up a consulate in Lhasa," said Jujian Hua, director at Tibet's Foreign Affairs Office. "That depends on India." With the 13th round of border talks between India and China resuming in New Delhi earlier this month, Beijing is emphasizing that it wants improved relations with its southern neighbour. "The (resumption of) cross-border talks between China and India represents a great step in the relationship between the two countries," Jujian told a visiting IANS correspondent. "The two governments started communication several years ago in terms of trade and culture. The local government (of Tibet) has attached great importance to trade, culture and tradition (exchanges), including tourism." According to him, tourism has greatly increased with more than 12,000 Indian pilgrims visiting Tibet this year to circumambulate Mt Kailash, the 6,638m Himalayan peak in Tibet's Nari province that is venerated by Hindus, Buddhists and Jains alike. "Deepening the bilateral relationship really depends on India," the official said. "Between friends, we should communicate more so that our relationship is strengthened. The central government of China and the Tibet Autonomous have a very positive attitude." However, the official rued that New Delhi has several times refused visa to Chinese delegates. "Several trade and cultural delegations (headed for India) didn't get visas," he said. According to him, even a month ago, a trade delegation headed by the vice-governor of Tibet was refused visa by the Indian authorities. Though officials stop short of spelling it out, the major irritant in India-China ties is the presence of the Dalai Lama and his 'government-in-exile' in India's Dharamsala town. China officially calls the exiled former ruler of Tibet a separatist and his 'government' illegal and it is clear that exchanges between the two governments could improve remarkably if India closes down the 'government-in-exile', just as Nepal closed the office of the Dalai Lama's envoy in Kathmandu four years ago. "The 'government-in-exile' is not in line with international laws," says Angpu Gejyuan, vice-director of the Religion and Nationalities Committee. "No government admits such exiled governments. China and India are two ancient civilisations. We want the Indian government to do that which benefits the relationship and friendship between the two countries." The Indian consulate in Lhasa was closed following the tumult in Tibet beginning from the 1950s after China annexed the former Buddhist kingdom and the 14th Dalai Lama fled to India following a failed uprising in 1959. Three years later, China attacked India and the Indian consulate in Lhasa was closed. At present, Nepal is the only country to be allowed a consulate in Lhasa, the Forbidden City. Though there have been rapid changes in Nepal's own political scenario, its successive governments, though diverse, have upheld the same foreign policy that considers Tibet, along with Taiwan, to be an integral and inalienable part of China. As memories of the 1962 war faded, India was allowed to open a consulate in Shanghai last year besides the embassy in Beijing, and then Indian External Affairs Minister Pranab Mukherjee inaugurated a second consulate at Guangzhou, a diplomatic concession for which India in turn gave China permission to re-open the Chinese Consulate in Kolkata that had been closed after the 1962 war. Besides India, the US is also seeking to open a consulate in Lhasa. In May, the Foreign Affairs Committee at the US House of Representatives passed a bill authorising the Secretary of State to establish a consulate in Lhasa. US President Barack Obama will visit China in November when he is expected to push for the new consulate. 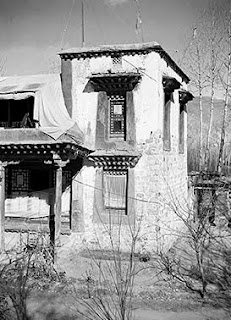 India has not sought permission for consulate in Lhasa, says Indian official Saibal Dasgupta, Times of India August 25, 2009, BEIJING: The Indian government has not approached Chinese authorities for permission to open a consulate in Lhasa, the regional capital of Tibet , a government official clarified. He was reacting to a news agency report indicating that China was ready to allow India to set up a consulate in Lhasa. The report quoted a director in Tibet's foreign office saying that India can set up a consulate in Lhasa. When contacted, the Indian official clarified there was no question of China discussing this issue as New Delhi has not presented any plans to open a consulate in the Tibetan capital. Nepal is the only country, which has been permitted to establish a consulate in Lhasa. The government of Nepal plays an important role in helping China to curb the flow of Tibetan refugees to India through the Nepalese route. India had a consulate in Lhasa in the early sixties after the escape of the 14th Dalai Lama to India. Chinese authorities keep a close watch on the movement of foreigners in Tibet because it continues to be politically sensitive. Several western nations keep a close watch over the situation in Tibet although they do not have any official presence. Lhasa consulate report rejected Global Times August 28 2009 China yesterday dismissed the reported setup of an Indian consulate in Lhasa, the capital city of Tibet Autonomous , adding that the city is not being considered for a foreign consulate. Asked by the Global Times to confirm the report of Indian media that India can reopen a consulate in Lhasa any time, China’s Foreign Ministry spokeswoman Jiang Yu said the Chinese government, as always, welcomes the establishment of foreign consulate units in China to promote bilateral relations. But China has not yet approved any consulate settlement in Tibet since it doesn’t meet the conditions for a foreign consulate now.