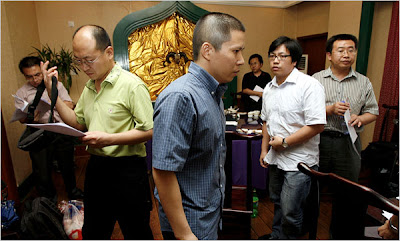 Xu has been released on bail. That is good news, though it is not very clear what 'bail' means in China. Will he be able to continue to do his work on human rights? Doubtful.

What Bail Means for Xu Zhiyong Pioneering Chinese legal activist Xu Zhiyong was released from custody Sunday morning on what’s known in Chinese as “qubao houshen” (取保候审). In English, the term is most commonly translated as “bail,” though it carries some specific connotations in the context of Chinese criminal procedure.
Qubao houshen literally means “obtain a guarantor while pending trial.” It is variously described as non-custodial detention and as a form of probation, since conditions may be imposed on the movements and activities of the suspect, who can subsequently be jailed for violating the conditions.
Unlike in the United States, where bail is routinely granted in cases where the suspect doesn’t pose a major flight risk or a danger to society, qubao houshen is rarely granted to Chinese suspects, who are generally held in custody until trial.
China’s legal activists have long called for authorities to increase the availability of bail to suspects in criminal cases, especially when relatively minor crimes are involved. The fact that bail is granted only in extraordinary cases in China has led many to proclaim Mr. Xu’s release as a sort of victory, even if only temporary.
As Mr. Xu himself noted, police are still investigating his tax evasion case and he may still be subject to prosecution. Joshua Rosenzweig, a senior researcher with the U.S.-based human rights group Duihua Foundation, notes that the charges against Mr. Xu (tax evasion) may have factored into the consideration of his eligibility for bail.
“The decision to release a suspect on bail most likely has to go through a process of vetting at higher levels,” he says. “It is easier to release someone on bail for tax evasion than if the charge was subversion or inciting subversion.” However, in certain respects, Mr. Xu’s release puts police in a better position to continue investigating him.
Under qubao houshen, police can monitor his activities for a full year, investigating not only the tax charges for which Mr. was arrested, but any other leads that could be used to make a case against him. Had Mr. Xu been kept in custody, the police investigation would have typically had a much shorter period of a few months in which to conclude their investigation.
“The release takes some pressure off of the police while allowing them to continue the investigation,” says Mr. Rosenzweig. And of course, it is not uncommon in China for activists to be detained, released, then detained again and subject to more serious political charges such as attempted subversion.
Recent examples of such repeat-detainees include Liu Xiaobo, Hu Jia and Guo Quan.
Posted by Claude Arpi at 3:45 PM