When Zhou was ready to accept the McMahon Line 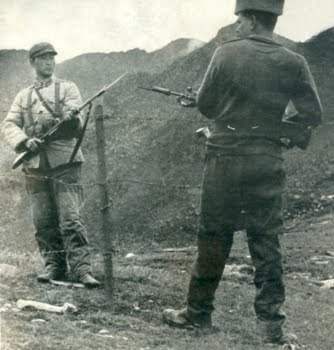 I am reposting here a note written on this blog in September 2009.
At the end of the 1950s (till 1958-59), the Chinese Premier Zhou Enlai had no problem with the McMahon Line (except for the 'colonial' connotation of the name).
A few years ago, a section of Volume 36 of the Selected Works of Jawaharlal Nehru dealt with the visit of Zhou Enlai in India (November-December 1956).
The transcript of the discussion between Nehru and Zhou Enlai on the McMahon Line are posted on my website.

[posting dated September 14, 2009]
With the constant Chinese nagging about the McMahon Line (and Arunachal), this letter from Jawaharlal Nehru to U Nu, the Prime Minister of Burma shows that the Chinese leadership had no problem to recognize this demarcation between India and 'China's Tibet' in the 1950's.

To Mr. U Nu
Prime Minister of Burma

New Delhi
22 April 1957
My dear U Nu,
I have received today your letter of the 17th April 1957, with its enclosures.
Thank you for it.
I shall have the matters referred to in your letter examined by the Historical Section of the External Affairs Ministry. In case I can give you any useful information about them, I shall do so in a later communication.
I am sorry that there has been so much difficulty in your arriving at a settlement about border problems with the Chinese Government. I confess that I do not very much like the attitude of Premier Chou En-lai [Zhou Enlai] in this matter. The impression created upon me is that he was not fully adhering to what he had told you or U Ba Swe [previous Prime Minister] previously. But this is for you to judge.
I am writing to you immediately so as to inform you of one particular development which took place here when Chou En-lai came to India on the last occasion. In your letter you say that while Premier Chou En-lai was prepared to accept the McMahon Line in the north, he objected to the use of the name 'McMahon Line', as this may produce 'complications vis-a-vis India', and therefore, he preferred to use the term 'traditional line'.
When Chou En-lai was here last, we discussed many matters at great length. He referred to his talks with you and U Ba Swe and indicated that a satisfactory arrangement had been arrived at. In this connection he said that while he was not convinced of the justice of our claim to the present Indian frontier with China (in Tibet), he was prepared to accept it. That is, he made it clear that he accepted the McMahon Line between India and China, chiefly because of his desire to settle outstanding matters with a friendly country like India and also because of usage etc. I think, he added he did not like the name 'McMahon Line'.
This statement that he made to me orally was important from our point of view and so I wanted to remove all doubts about it. I asked him again therefore and he repeated it quite clearly. I expressed my satisfaction at what he said. I added that there were two or three minor frontier matters pending between India and China on the Tibet border and the sooner these were settled, the better. He agreed.
I entirely agree that the use of the word 'McMahon Line' is not right and should be put an end to. It reminds one of British incursions and aggression. We are, therefore, not using these words any longer. Indeed, so far as we are concerned, we have maintained all along that our frontier with China, except for the two or three very minor matters, was a fixed and well known frontier and there was no dispute about it. We had never raised this question with China, but I had stated in Parliament here and also to Chou En-lai in Peking that there was nothing to discuss about our frontier as it was fixed and well known. We have now our check-posts all along this frontier.
Thus, so far as we are concerned, this frontier (known previously as the McMahon Line) is not a matter in dispute at all and Chou En-lai has accepted it. It is true that his acceptance was oral, but it was quite clear and precise.
As regards the two or three minor matters, we are expecting some Chinese representatives to come to Delhi fairly soon to discuss one of them. The territory involved is a very small one in the high mountains. We do not propose to raise the other two small matters at this stage. After one question is settled, we might, if we think proper then, refer to the other two.
I am writing to you immediately in answer to your letter so as to keep you informed about this so-called McMahon Line between India and Tibet and what Chou En-lai said to me on this subject, This has some relevance to your own McMahon Line.
...
With all good wishes,