Wang in Tibet: Sinicization of the religions in China 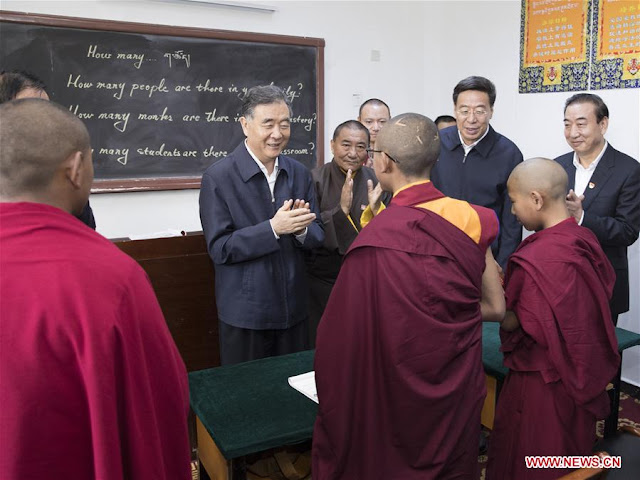 Tibet is an extraordinarily popular destination these days, not only for the 26 million Chinese tourists visiting the Roof of the World, but also for the members of the Standing Committee of the Politburo of the Communist Party of China (CPC) Central Committee.
In just one month, two almighty members visited Tibet (Number 2 and 4 in the hierarchy).
I mentioned the visit of Premier Li Keqian just before Beidaihe 'summer holidays' and now it is the turn of Wang Yang, chairman of the National Committee of the Chinese People's Political Consultative Conference (CPPCC) to spend three days on the plateau (apparently in Chamdo and Lhasa).
Xinhua reported that Wang visited a Tibetan family in Chamdo, during his three-day 'inspection tour' on the plateau from August 24 to 26.
The news agency commented: “Top political advisor stresses poverty relief, religious work in Tibet.”
His visit was to urge the Tibetans (and the local cadres), to do more “to advance targeted poverty relief and accelerate the paces of building a moderately prosperous society in all respects” and also to take care of the “religious work to ensure prosperity, development and lasting stability in Tibet Autonomous Region.”
“Winning the tough battle of eliminating poverty in Tibet is of great significance to people's well-being and ethnic solidarity,” Wang said.
Apparently he came for the same objective than the Premier at the end of August.
Strange!
Is there so much poverty on the plateau more than 60 years after the so-called Liberation?
Wang advised the cadres: “Priority should be given to improving the quality of poverty relief, with a reasonable sequence of work and no hastening to meet deadlines.”
He spoke of the long-term effects of relief (of poverty) work: “The current standard of poverty relief must be strictly implemented,” he added.
Wang also stressed ecological protection, “ecological relocation work in high-altitude mountainous areas should proceed steadily and in an orderly manner. The national ecological security shield must be strengthened.”
What does ‘relocation work’ mean? It is not clear, probably to relocate the nomads in ‘new cities’, often looking like ghettos.

Sinicization of the religions in China
Wang also visited Sera monastery near Lhasa, where he asked the monks to work  for “improved and innovative temple management and advancing anti-separatism efforts.”
Are the monasteries still the hot-beds of ‘separatism’?
It looks like.
Wang was accompanied by Drukhang Rinpoche Thubten Khedrup, the President of the Tibet branch of the China Buddhist Association.
The CPPCC Chairman chairman spoke of “social stability and prosperity of Tibet in the long term, urging preparedness and precautions for danger in times of safety.”
What danger? From Dharamsala? From India?
While visiting the monastery, he mentioned the new of theme of Xi Jinping’s religious campaign, “Sinicization of the religions in China”.
More efforts should be made to integrate Tibetan Buddhism into China’s socialist society, he explained, asking the monks “to firmly uphold the leadership of the CPC, inherit and promote patriotism, and be courageous to battle all separatist elements, in order to further protect the national reunification, ethnic unity and social stability.”
Why was the Panchen Lama, who has been camping in Lhoka prefecture in the past few days, not accompanying Wang is a mystery?
In terms of seniority, he is certainly ‘senior’ to Thubten Khedrup.
Why was he not around is rather strange, though some more pictures may emerge in a few days, showing an encounter.
While in Sera, Wang instructed the monasteries to better cultivate “talents in religious work within the religious circle, to preserve the good image of Buddhism, and push forward the healthy development of Tibetan Buddhism.”
With Chinese Communist characteristics of course…
Was there a meeting with the PLA officers and soldiers posted on the platea?
Nothing has appeared so far.Wang was accompanied by Zhang Yijiong, who since 2012 serves as executive deputy director of the United Front Work Department and as such is responsible for the Tibetan affairs in Beijing.
Incidentally, Zhang succeeded Hu Chunhua as Deputy Secretary of the TAR.
Today Hu is a member of the Politburo (at one time, he was the heir-designate of the Emperor).
All this does not explain why two visits by members of the Politburo’s Standing Committee were necessary.
To enter in the Guinness Book of Records?
We will have to wait to know.
As mentioned earlier, it was Wang Yang who should have visited Tibet in the first place. 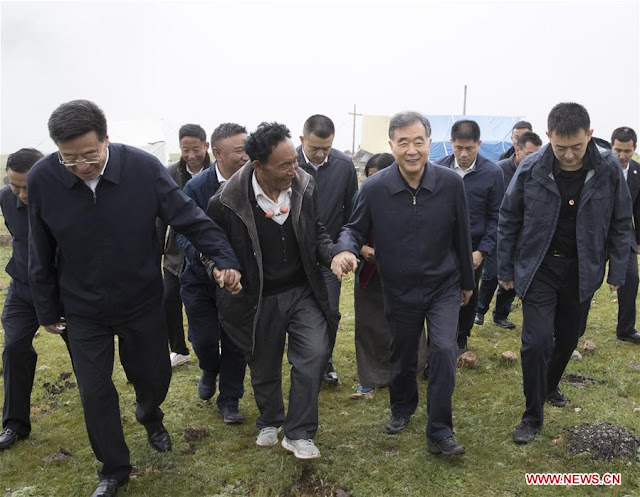