All is not well in the Middle Kingdom 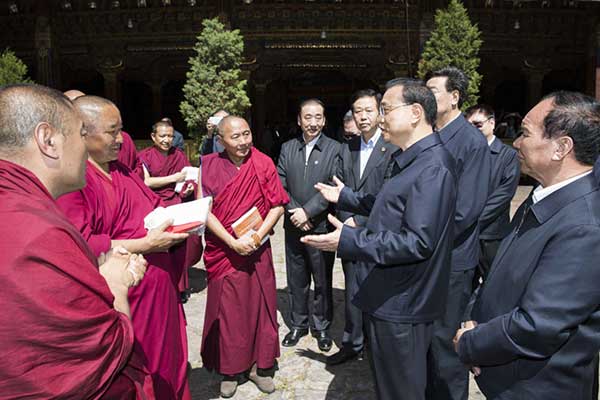 Authorities in China have forgotten to provide a translation of the ‘friendship pillar’ which reads: Tibetans to be happy in the land of Tibet and Chinese in the land of China

In 821 AD, Tibet’s great emperor, Tritsuk Detsen and his Chinese counterpart entered into an agreement “seeking in their far-reaching wisdom to prevent all causes of harm to the welfare of their countries now or in the future.”
The Peace Treaty signed between Tibet and China was carved in Tibetan and Chinese language on a stone pillar which was placed in front of the Jokhang Cathedral in Lhasa, the Tibetan capital. A few years ago, the Chinese decided to restore the pillar describing the grand alliance; the communist authorities, however, forgot to give the translation of the ‘friendship’ pillar.
Last week, when the Chinese Premier Li Keqiang visited Lhasa, he walked down to the stone pillar and affirmed that the monument was a model for unity between the Tibetans and the Chinese. Li probably did not read the Treaty:


Tibet and China shall abide by the frontiers of which they are now in occupation. All to the east is the country of Great China; and all to the west is, without question, the country of Great Tibet. Henceforth on neither side shall there be waging of war nor seizing of territory. If any person incurs suspicion, he shall be arrested. …Tibetans shall be happy in the land of Tibet, and Chinese in the land of China. Even the frontier guards shall have no anxiety, nor fear.

This was forgotten when the communist troops walked into Tibet in October 1950.
Today, Tibet is an ‘unalienable’ part of China (and the frontier guards have shifted to the Indian border).
The ‘unalienable’ part was highlighted by Premier Li during his visit. It is the art of rewriting history with Chinese characteristics.
Interestingly, it was the first ever visit of a Chinese Premier to the Roof of the World. It is usually the Chairman of the Chinese People’s Political Consultative Conference, also a Member of the all-powerful Standing Committee of the Politburo (presently Wang Yang) who visits Tibet, not the Premier. The head of the United Front Work Department also regularly ‘inspects’ the Roof of the World. One reason for this unexpected change might be that President Xi Jinping (who was then travelling in Africa) finally tries to delegate some of his responsibilities to Li Keqiang; rumors to this effect have recently been circulating in China.
The coverage of the visit is another sign that all is not smooth in the Middle Kingdom.
Usually such an important visit would be announced after the VVIP is back in Beijing; only then reports would appear in Chinese and later the English version would come out, tailored for the foreign public. This time, it was rather chaotic; some English websites broke the news on the first day of the visit, while Xinhua kept mum till Li was back in Beijing. Are there two voices of China?
Remember in March, after the legislative and consultative meetings, China decided to unify its voice. The State Council announced that the Government had formed the world’s largest media group called Voice of China, combining the existing China Central Television, China National Radio, and China Radio International under one unified umbrella and name. It was the responsibility of the publicity (ex-propaganda) department to manage it. But in the case of Li Keqiang’s visit to Tibet, China spoke incoherently. While the media affiliated to the State Council covered it nearly ‘live’; Xinhua waited for Li’s return to Beijing to report.

What were the visit’s highlights?
The atheist Premier went to the Jokhang Cathedral in Lhasa, he told some monks in attendance that he hoped that “Tibetan religious patriots could learn from the eminent monks in history, and devote themselves to maintaining the unity of the state, ethnic solidarity, a harmonious society and smooth religious affairs.”
All the monks are obviously not good ‘patriots’, a fact which worries Beijing. Li also urged “religious circles to continue to make contributions in safeguarding national unity and promoting ethnic solidarity as well as social harmony.”
China Tibet Online had reported earlier that Li Keqiang visited Southern Tibet on July 25. Apparently, Li went directly to Nyingchi prefecture, bordering Arunachal Pradesh where he visited a village in Mailing County; this is a new village inhabited by Monpas, who have been ‘relocated from impoverished areas’, located next door. Metok County is situated on the Yarlung Tsangpo (Brahmaputra), north of Upper Siang district of Arunachal Pradesh.
Li went to a newly-built house of a Tibetan named Kunsang; he sat with the ‘migrant’ family and talked to the six members of the household about their daily life. Kunsang told Li that his family moved from Metok County, where “road travel is fairly difficult”. This is rather surprising considering that since 2013, when a tunnel was opened, the Chinese propaganda has been stressing the ‘changes’ in Metok, principally mentioning better communications. So why move people to a nearby County, if the situation had improved so much in the first place?
Li was said to have been really pleased “to see that the villagers have cast off poverty through the relocation programme and lived a prosperous life.” The Premier wished the family an even more prosperous life in the future.
It is difficult to understand why this family was ‘shifted’ from Metok to Mainling County in the first place. Were they creating problems for the Chinese government near the Indian border? It is possible. Metok, like several other places on the border, has been the focus of very generous investments from the Central Government, the local Government as well as different Provincial Governments. It is doubtful if ‘poverty alleviation’ was the reason for this transfer of population.
For the Tibetans, it should be worrying, considering that the Premier’s visit takes place just days before the yearly summer retreat of the party’s top bosses in Beidaihe, which is always the occasion to discuss ‘new’ policies. Will reallocation of Tibetans within Tibet (like it is happening in Xinjiang) from border areas be discussed?
Incidentally, Li met with the hard-core Old Guard: Phakpala, Raidi, Jampa Phuntsok, Legchok and Passang, who served in Tibet for decades; he praised their past work for the ‘stability’ of Tibet.
Has Beijing decided to return to ‘pure’ communist policies of the old days, symbolised by these cadres? It is quite frightening.
Posted by Claude Arpi at 10:19 AM