China is opening a new front in Ngari

During the last few years, Beijing concentrated on the development of Southern Tibet (Nyingchi and Lhoka prefectures), not far from the Indian border of Arunachal Pradesh (the McMahon Line).
I have often mentioned the mushrooming of new ‘model’ villages on the Tibetan side of the Indian border. This development was officially linked to ‘poverty alleviation’ and the ‘defense the borders’.
Several senior Communist leaders have visited these new villages, either north of Kibithu (there is War Memorial as a bonus); in Metok, north of Upper Siang district; in Yume (also written Yumai), north of Takshing in Upper Subansari or in Lepo, Marmang and Tsona, north of Khenzimani and Tawang.
In China, one should always recall the words of the boss; Xi Jinping said:


Govern the nation by governing the borders, Govern the borders by first stabilizing Tibet, Ensure social harmony and stability in Tibet and strengthen the development of border regions.

But the Indo-China border is long and not only located in the Southeast.
In the West, Tibet (today China) shares a disputed frontier , with the Indian States of Uttarakhand, Himachal Pradesh and Jammu & Kashmir (Ladakh).
Whatever happens north of this border should be of some interest/worry for Delhi. 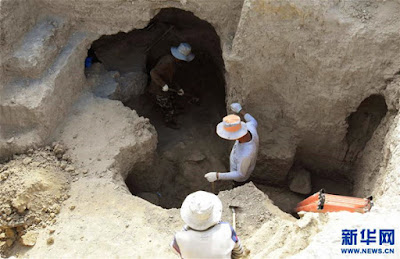 Shifting the Front
It looks as in the coming months, the development front will shift from Nyingchi/Lhoka to Western Tibet (Ngari Prefecture).
One telling sign: the amount of archeological excavations undertaken.
China, as a colonial power, has to establish its bonafide in the region.
Last week, Xinhua reported “Chinese archaeologists have excavated more than 20 tombs thought to be around 2,000 years old in southwest China's Tibet Autonomous Region,” and then to conclude: “ancient tombs provide clues to mysterious civilization in Tibet.”
The idea is to prove that Tibet has not always been Buddhist (which is true).
One of the projects was launched by the Sichuan University in early July.
Quoted by Xinhua, Huo Wei, head of the School of History and Culture of this university announced that “more than 70 artifacts have been found in these tombs in Peyang Tunggar [Dungkar] ruins [near Tholing, the capital of the former Guge Kingdom], including bronze mirrors, fabric, pottery, and accessories. We found millet in a pottery cup and tea in a wooden box, which are believed to date back between the Han Dynasty (206 BC-220 AD) and Jin Dynasty (265-420). We also discovered a central Asian bronze mirror with handles in one of the tombs."
Huo further explained: “The discoveries showed that there was a long stage of civilization in the Peyang Tunggar region, and the civilization had close ties with the surrounding areas. Before Buddhism was introduced to Tibet in the seventh century, there was a period called Shangshung culture according to historical recordings. The location and historical dates of the tombs coincide with existing knowledge about Shangshung.”

A new tourist spot
The first stage to develop the area into a tourist spot, is to provide a solid historical background.
Since 1994, Chinese archaeologists have launched several investigations and excavations in Tsada (Zanda) County and have uncovered numerous Buddhist grottoes and ancient tombs.
Archeology is important in the Communist scheme to show that there were ‘older civilizations’ on the plateau, long before its inhabitants became Buddhist and of course, that it used to be part of the Chinese ‘Silk Road’ to Central Asia.
India is hardly mentioned in these articles, though areas like Spiti, Kinnaur or Ladakh have always been deeply connected with Western Tibet (religiously, economically and also politically).
In July, The Global Times affirmed that the excavation in Western Tibet “will help archaeologists understand Tibetan cultural development."
Five institutes and universities, including the Tibet Institute of Cultural Relics Protection, and the School of History and Culture of Sichuan University are on the job: “relics were discovered in recent years during infrastructure construction and archeological investigations,” Xinhua reported.
Lü Hongliang, a professor at the School of History and Culture of Sichuan University, told The Global Times that Ngari “is at the intersection of South Asia and Central Asia on the Qinghai-Tibet Plateau, giving it an important cultural status.”
With a solid historical basis, the Chinese government can develop ‘cultural tourism’. 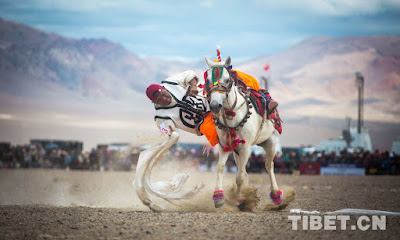 Cultural Tourism
The 4th Annual China Tibet Cultural Tourism International Expo is to take place from September 7 to 11 in Lhasa and Nyingchi: “the investment-attraction platform at the expo will not only improve Tibet’s cultural soft power, it will serve to promote tourism and boutique tourism across the region, as well as help more businesses build collaborations in Tibet and boost the local economy,” asserted Xinhua.
The official news agency added: “The Ngari area, located in western Tibet, has an average altitude of 4500 meters, and is known as ‘Roof of the Roof of the World’.”
On July 16, an event was launched in Lhasa, it was called: ‘Go West: Ngari Photo Tour’.
But that is not all, the 7th annual Zhangzhung Cultural Tourism Festival, with events such as traditional horseback racing, exhibitions of archaeological artifacts and the Zhangzhung Cultural Show is being held from July 28.
A full program for the lakhs of tourists coming from the Mainland.
Xinhua admits: “In recent years, the Ngari region has built various boutique tourism events, such as stargazing, the Zhangzhung Cultural Tourism Festival, and other cultural tourism programs, etc., to better enrich the offerings of cultural tourism.”
Enrich the region too.
In August, the Shoton (Yoghourt) Festival was organized in Lhasa. The Tourism and Development Commission revealed that the capital received 2.89 million visitors, an increase of 20.48% compared to the previous year, "achieving an tourism income of 981 million yuan, an increase of 25.28%."
One Zhang, from Hubei Province, who visited Lhasa for the first time, said: “Before, I've only seen the Shoton Festival on TV and online and I thought it was so culturally unique. I feel very lucky to enjoy a perfect Shoton Festival on this visit.”
During the Festival, Lhasa has many events such as Thangka exhibition, hiking tours to Namtso lake, Tibetan opera performances, trade fairs.
Similar events are now planned in Western Tibet.


A New Role Model
In March, China Tibet Online had announced that the Ngari prefecture was to invest 20 million yuan “to improve public cultural services and promote its folk culture.”
It stated that training services will be provided for farmers and herdsmen and role models of ethical and moral standards will be rewarded: “People in border villages will be given easier access to the internet. Educational and red tourism sites will also be set up.”
To ‘promote’ cultural exchanges among local art troupes, the government offered 130 TV to highway maintenance groups and 5,280 movies were screened in rural areas; moreover, a new media center featuring multimedia programs in both Tibetan and Chinese was established.
Does it mean that Ngari has been neglected all these decades, despite the fact that the first Chinese troops entered Western Tibet in Summer of 1950?
It is unfortunately a fact, China would like to change this now.

Poverty alleviation
A few weeks ago, China Tibet News affirmed that the Tsada County “actively promoted the trademark strategy along with paying more attention to the work ideas of developing agriculture. The county develops specialty product trademark so as to achieve a higher living standard for local farmers.”
The County Administration ‘vigorously’ developed specialty products through various exhibition. Online sales platforms have been set-up, while tapping distribution chains: “Actually a three-dimensional marketing strategy has been initially constructed to give new impetus into the development of some characteristic industries.”
All this show the renewed interest of the authorities in Lhasa (and in Beijing) for Ngari.

Looking after the border populations
China Tibet Online described the life of one Tsering Namgyal from Tsada: “he lived for many years in a relatively old wooden house.”
He has now been given a new house: it was a dream for him: “when he was a child, he worked as a serf, and he begged on the street to be given alms by the monks of the monastery; he didn't have enough to eat or wear, and he lived in a wooden house stained black by smoke,” said the website explaining that in 2016, Tsada County was selected as a pilot county of building well-off villages on the border.
According to Dawa Wangdul, the mayor of the border village: “In October 2017, Tsering Namgyal and his daughter, grandson, and granddaughter moved into their 180-square-meter, two-story house new house."
Once again, if Communist China is such a great welfare State, why was the poor not looked after earlier? 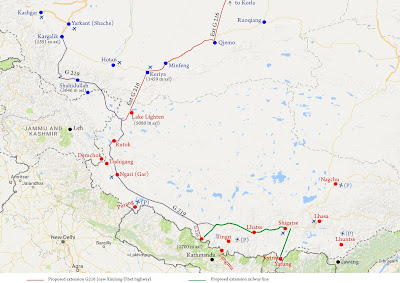 Why is it important for India?
It looks like the Chinese government is going to duplicate in Ngari what was done in Nyingchi and Lhoka.
First and foremost by improving the infrastructure to the border villages.
Among the three new airports to be constructed in Tibet – Lhuntse (Lhoka), Tingri (Shigatse) and Purang. The last one is located in Ngari prefecture.
The objective of these airports is to strengthen the border region's communication with surrounding areas. The construction will begin in 2019 and the airports will be functional in 2021.
As often mentioned on this blog, the airports as well as the highways have dual use (civilian and military).
Several roads branching from the Highway 219 are being constructed to the border with India. I have mentioned a few in earlier posts.
The project ‘Guardians of the Sacred Land and Builders of Happy Homes’ is not an innocent scheme.
India needs to watch carefully. 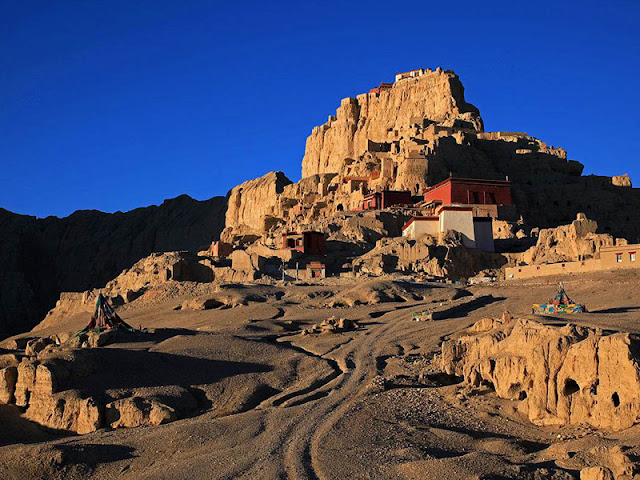 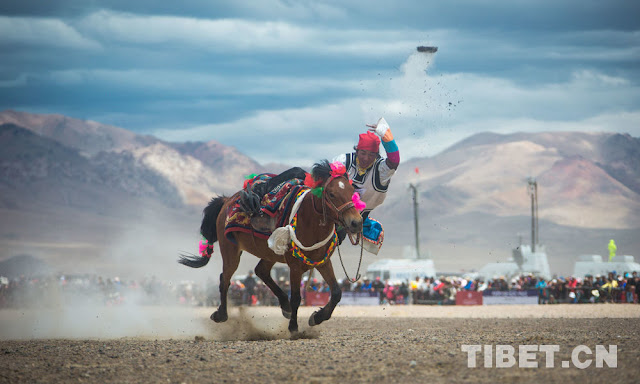 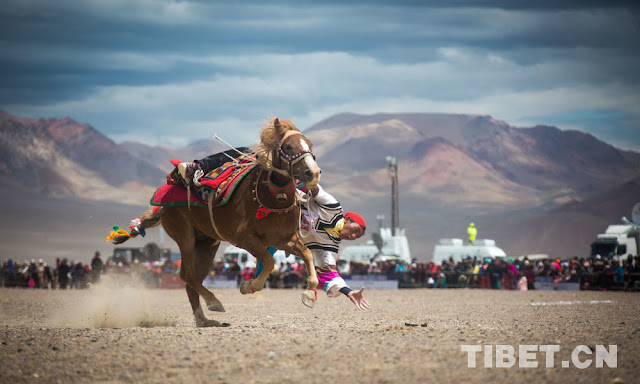 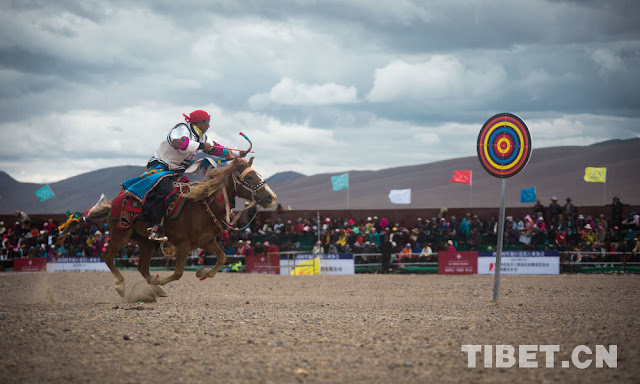 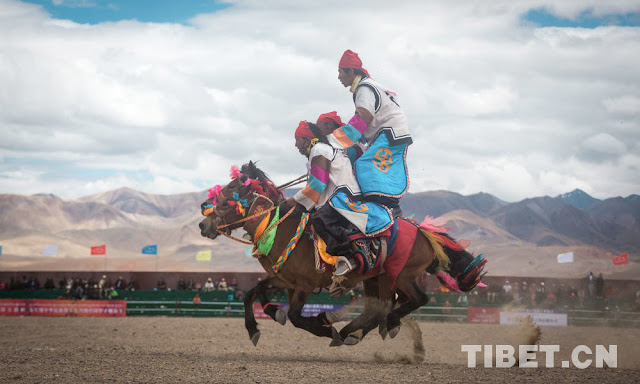