Turbulent times ahead for Xi Jinping 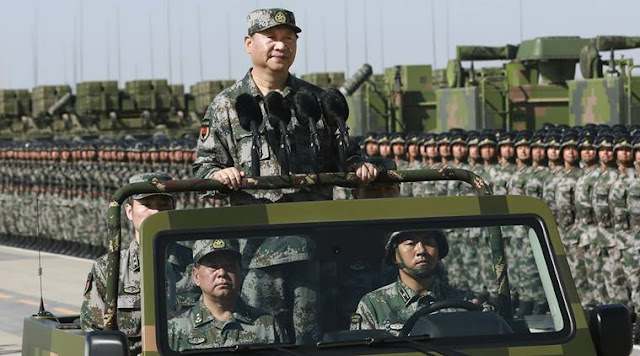 My article Turbulent times ahead for Xi Jinping appeared in Rediff.com

'Does it mean that we are witnessing the end of an era?'
'Probably not, but the post-Trump trade war has certainly brought a lot of instability in China,' notes Claude Arpi.

The annual summer conclave of China’s bosses has just started at the beach resort of Beidaihe, 300 km east of Beijing, in Qinhuangdao City of Hebei Province.
Every year the main power brokers of the Middle Kingdom discuss the nation’s (and the Party’s) future in an informal setting.
Usually, we only indirectly know of the presence of the top leadership in Beidaihe; they have not been reported anywhere else in China or abroad.
Historically, Beidaihe has often been in the news in China, for good or bad.
Remember in August 1958, Beidaihe witnessed an enlarged meeting of the Politburo of the Central Committee of the Chinese Communist Party (CCP).
On the center stage during the 1958 Beidaihe Conference was the poor economic situation (like this year); for days, the industrial and agricultural productions were discussed and finally a series of critical documents were issued; it was decided to raise the steel production target to 10.7 million tons and the grain target to 350 million tons; the following year, it was proposed to produce 30 million tons of steel and 500 million tons of grain.
Mao’s megalomaniac targets and the nationwide setting-up of people's communes would lead China to the Great Leap Forward …during which 40 million died.

Hopefully this year, the outcome will be less dramatic. The South China Morning Post however observed: “there could be a cloud over this year’s seaside gathering, as an escalating trade dispute with the United States threatens to affect not only China’s economy, but also its domestic politics and foreign policy.”
The Taiwan News also believes that “trouble may be brewing for China's leaders at the Beidaihe Summit.”
Taipei’s publication, which is usually well-informed, added: “Factionalism in the party begins to show as CCP leaders and elder statesmen convene this week in Hebei Province.”
The economic ‘troubles’ are partially due to the policies of the US President, who with his erratic decisions seems to have destabilized Beijing, particularly President Xi Jinping, who is bound to get the blame for the failures.
On July 31, immediately after Xi returned from his trip to Africa to attend the BRICS meeting, he called a meeting of the CCP’s Politburo; all sorts of news started had started circulating about the ‘core’ leader’s lack of ability to answer Donald Trump and tackle the economic slowdown.
The Taiwan News explained: “Some observers consider the sudden Politburo meeting to be a political show of strength by Xi before the upcoming CCP summit at Beidaihe.”
The pattern in the publishing trends of The People’s Daily was telling for many observers: Xi had been absent from the front pages for several days before his foreign trip.

Did Xi want “to turn down the spotlight on his leadership, perhaps in an attempt to diminish his cult of personality which some fear has grown excessive to the point of being a liability,” asked a Japanese publication?
Other rumors say that Li Keqiang who heads the State Council (Government) “may have been leading a campaign behind the scenes to diminish Xi’s authority, especially in economic matters and trade negotiations with the US.”
Further, former Party leaders Hu Jintao, Jiang Zemin or Wen Jiabao would have sent a letter of concern to Xi; the purported letter would cite: “China’s expansionism and militarism in the South China Sea, as well as the increasingly nationalistic rhetoric cultivated by Xi’s leadership is in many ways responsible for encouraging the current trade conflict with the US;” all this would have led to the present economic difficulties.

Another serious development, Unirule, a liberal economic think tank in Beijing, published a 10,000-character essay by Xu Zhangrun, a scholar teaching at Tsinghua University “which has lit up the Chinese internet at a time when the voice of Chinese intellectuals has been dying out,” said China Change, a website watching the Middle Kingdom.
The ‘Ten Thousand Word Petition’ “carries out a systematic critique of the retrograde tendencies in Chinese social and political life, in particular since the end of 2017”, commented Initium Media, a Hong Kong-based website, elaborating, it continued: “It explicitly points out and warns against the danger of the return to totalitarianism, and calls for a stop to the cult of personality and the resumption of term limits on the post of the state chairman. The piece has become one of the few direct criticisms of contemporary ills in China among the intellectual class.”
Xu Zhangrun’s essay, titled Our Dread Now, and Our Hopes is in four parts: ‘Four Bottom Lines,’ ‘Eight Forms of Anxiety,’ ‘Eight Hopes,’ and ‘The Interim.’
The point about the abolition of term limits for the post of state president, which was passed in March by the National People’s , directly targets Xi Jinping; it is like “scrapping 30 years of political reform with one flick of the pen.”
Among the ‘Eight Fears’ are “an increased repression and thought reform of intellectuals becoming trapped in a new armed race, war, and new cold war” or “the end of the opening up and the comprehensive return of totalitarian politics”.
The ‘Eight Hopes’ includes: stop wasting money abroad; abolish the privilege system for retired high-ranking cadres; immediately put a stop to the cult of personality or overturn the political verdict on June 4 (Tiananmen Square massacre in 1989).

Many of these issues are linked with Xi’s China Dream and an everyday more powerful (and bullying) Chinese State.
China is discovering that every coin has two sides; the ‘side-effects’ of quick growth and the pervading dominance of the Party, have triggered the recent worrying developments.
Last month, The South China Morning Post argued: “China’s ruling Communist Party’s tightened control over think tanks and a crackdown on extravagance could be having an impact on how the leadership handles foreign affairs.” Taking the example of Beijing’s understanding of President Trump, the Hong Kong paper explained: “Beijing appears to have been caught off guard by Trump’s protectionist trade blitz, and that it underestimated rising anti-China sentiment among the US elite.”
Beijing's tight control over ideology at all levels, including college campuses, which requires students and researchers to closely follow the Party line, has hampered the working of the think tanks. As a result, nobody was able to predict the new US policies: “Any discussion of government policy without permission could be regarded as acting wantonly and issuing groundless criticism of the party's decisions and policies. It could result in punishment,” observed the Hong Kong newspaper, further remarking that “since the top priority of Beijing's policy is to maintain the party's power, some policy advisers have avoided in-depth discussions with US think tank researchers.”

Last month, Richard McGregor in The Financial Review even asked: “Has China's leader Xi Jinping now passed his peak?” He remarked: “China seems set on an inexorable rise to superpower status to rival the US. …But that begs another question which has been sweeping Beijing over the northern summer – whether we are now witnessing peak Xi Jinping.”
The author quoted a variety of sources: retired leaders, rival factions within the CCP and some ‘intelligentsia’; according to McGregor: “Xi has acquired many enemies along the way in the country's traditional power centres.”

Does it mean that we are witnessing the end of an era?
Probably not, but the post-Trump ‘trade war’ has certainly brought a lot of instability in China.
One sign of change in the balance of power was the recent visit of the Li Keqiang to Tibet. It was the first ever visit of a Premier on the Roof of the World. Like everything under the Communist regime, these visits are scripted and Tibet has never been the Premier’s responsibility; it is usually the Chairman of the Chinese People's Political Consultative Conference, also a Member of the all-powerful Standing Committee of the Politburo (presently Wang Yang) who 'inspects' Tibet.
One reason for this unexpected change, might be that President Xi Jinping (then travelling in Africa) finally tries to delegate some of his responsibilities to Li Keqiang.
The present scenario is bound to bring deep changes in China; it may result, among other things, in a more collective leadership running the affairs of the Middle Kingdom.
It is however doubtful if Prof Xu Zhangrun’s Eight Hopes could soon become a reality.
Posted by Claude Arpi at 5:24 PM