A statement of Zhou Enlai: sixty-four years ago 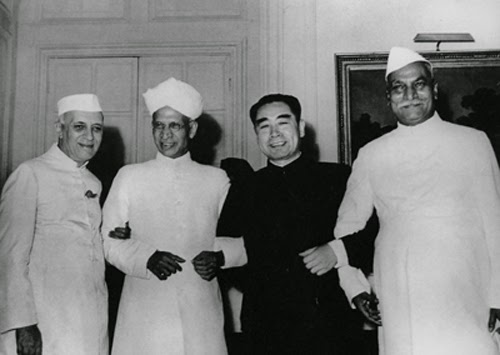 After several days of extensive talks between the Prime Minister of India (Jawaharlal Nehru) and the Premier of the State Council of China (Zhou Enlai), the latter held a press conference on April 15, 1960 at Rashtrapati Bhavan.
Before the beginning of the press conference, Zhou Enlai read the following statement.
Sixty four years later, very little seems to have changed in the Sino-Indian relations.
I presume that President Xi Jinping could read a very similar statement on Friday evening before leaving for Beijing.
The scoop of the present visit of Presidnet Xi Jinping is the sudden transfer of the Chinese Ambassador to India (Mr. Wei Wei). A day before the arrival of his supreme boss, he has been replaced by Le Yucheng, earlier posted as Assistant Minister of the Ministry of Foreign Affairs.
Le Yucheng also served as Director-General of the Policy Planning Department for the Ministry of Foreign Affairs; Minister to the Embassy of PRC in the Russian Federation, and Counselor to Permanent Mission of the PRC to the United Nations.
To change an ambassador the day before a Head of a State arrives in a country, is really a first in diplomatic annals.
What is behind this sudden move?

How foolish and naive are the Indians appearing in hindsight!

If you omit the names of the people, this piece sounds like it is written in 2014.

while army says there are no intrusions media claims there are. who is correct

If India maintained 100 percent watch on border then further intrusion would be physically impossible.

India continues not to keep control of borders even after five decades of the 1962 attacks.

It is deliberate negligence.

At least drones can be kept in air on entire border round the clock.