Was the local Chinese local Commander behind the Depsang incident? 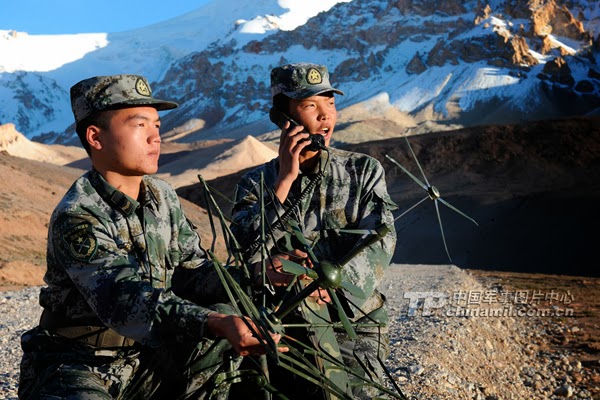 Last year, when I wrote that the Depsang incident of April 2013 was perhaps due to the initiatives of some PLA's local commanders, I was told that "it can't be. the PLA's generals  are a disciplined lot and Chairman Xi is their Supreme Commander".
I later thought I might be wrong, if everybody thinks it is a foolish idea.
Yesterday, I was amused to read in The Business Standard that Shrikant Kondapalli, the JNU professor and expert on China affairs, expressed "his concern about the fresh Chinese incursion into Indian territory". He claimed that "this could be a message given by the Chinese troops to its President, Xi Jinping, that no fruitful discussion on the boundary issue be held with the Indian leadership during his official trip."
It clearly means that some very senior PLA generals were not happy about the thaw between India and China.
Kondapalli told ANI: "It is not clear exactly what is happening in the Line of Actual Control (LoAC) areas. If the reports about 5000 [500, not 5000, my comment] troops are correct then I think that the People's Liberation Army (PLA) and the People's Armed Police Force are sending signal to the civilian leadership not to have any fruitful discussions on the border dispute while President Xi Jinping is speaking to Prime Minister Modi in New Delhi".
Kondapalli is also absolutely right when he says that the claim to Chumur was unheard of till a few years ago.
Chumur, located north of Himachal Pradesh, has never been historically  claimed by Tibet (and consequently, later by China). It is totally new claim with no historical basis.
Some other areas have been 'historically disputed' (these areas were discussed in detail, during the 5 months border talks in 1960), but Chumur is pure land grabbing by the People's Republic of China; 'expansionism' as Prime Minister Modi had put it during the legislative election campaign.
But, if my theory (and Kondapalli's) is true, it is a very serious issue as it means that Xi Jinping, the Chairman of the Central Military Commission does not fully control his generals.
Is the sacking of Ambassador Wei Wei linked to this issue?
It is too early to say.
The solution for the 'intrusions' has been enunciated by the Indian Prime Minister; he stated yesterday:


I raised our serious concern over repeated incidents along the border. We agreed that peace and tranquility in the border region constitutes an essential foundation for mutual trust and confidence and for realizing the full potential of our relationship. This is an important understanding, which should be strictly observed. While our border related agreements and confidence building measures have worked well, I also suggested that clarification of Line of Actual Control would greatly contribute to our efforts to maintain peace and tranquility and requested President Xi to resume the stalled process of clarifying the LAC. We should also seek an early settlement of the boundary question.

In military jargon: 'let us exchange these bloody maps of the LAC'.

In May, in an article in Rediff.com, I had suggested that some Chinese PLA generals posted in Lanzhou Military Area Command were possibly responsible for the Depsang Plain incident; the PLA had then planted their tents between the Chinese and Indian 'perceived' LACs, creating a lot of tensions between India and China.
Many thought that this was far-fetched.
The sacking of General Peng Yong, reported by Reuters (see article below), seems to confirm my theory.
But who is General Peng Yong?
According to his biography, Peng Yong is a Han, born in 1954 in Lulong County, Hebei Province. In 1970, he entered the Party's work force; a year later, he joined the CCP; later graduated from Shijiazhuang Army Academy Long-Distance Education Program with a Bachelor Degree in 1998.
From 2004 to 2011, he was Group Army (Corps) Commander of 47th Group Army of PLA.
From 2011 till recently, he commanded the Xinjiang Military Region. In November 2012, he was promoted as a member of the CCP's Central Committee.
Let us remember that the Xinjiang Military Region of the Lanzhou Military Area looks after the Indian border in Ladakh as well as Himachal Pradesh and Uttarakhand.
Reuters says that he had been 'booted off' for the attack, presumably by Uygyur militants, on the Tiananmen Square.
Why should the PLA Xinjiang Commander (and Central Committee) be responsible for a problem of law and order (Tiananmen incident).
The PLA's job is the defence of China's borders and is concerned with external threats from abroad (in this case, India).
The internal threats are dealt with the People's Armed Police (PAP) and State
Security apparatus (Public Security Bureau or PSB).
If a head had to roll for the embarrassing (for Beijing) incident which happened in the heart of the Chinese capital, the Party Secretary (and Politburo member) Zhang Chunxian should have lost his job.
PAP and PSB should have also been sacked.
They did not. It means that Peng Yong was shown the door for other reasons, the Depsang incident is a strong probability.
Let us see what happens next.

The official Xinjiang Daily said in a brief front page report that Peng Yong had been sacked as a member of Xinjiang's Communist Party Standing Committee, and would be replaced by Liu Lei, an army veteran with more than a decade's experience in the region.
The newspaper gave no reason for the move, but the party frequently removes top officials following such incidents as it seeks to apportion blame. The incident was especially embarrassing for the stability-obsessed party given the billions of dollars it spends every year on domestic security, not only in Xinjiang but across the country, and that the crash happened in the heart of Beijing.
Peng was appointed commander of the Xinjiang military region in July 2011. It is likely that he will also be relieved of his military duties.
Real power in China lies with party bodies rather than government ones, as that is where the key decisions are made.
The government has blamed Islamist extremists plotting holy war after a vehicle police said was laden with gasoline ploughed into bystanders outside the front entrance of the Forbidden City, on the north of Tiananmen Square.
The three people in the car died, as did two tourists. More than 40 were injured. Police have also detained five suspected accomplices. Security has been stepped up in Beijing and Xinjiang following the incident. Beijing party chief Guo Jinlong has urged the police to improve their capacity to collect intelligence and take precautions against further attacks, the city government-run Beijing Daily said on Sunday. Guo urged police and security forces to "look for vulnerable links" and "learn the lessons" from the incident, the report said.
Xinjiang is home to the Muslim Uighur minority, many of whom chafe at China's restrictions on their religion, culture and language, though the government says they are granted broad freedoms.
Xinjiang has been wracked by unrest in recent years, blamed by the government on the separatist East Turkestan Islamic Movement which Beijing believes was also responsible for last week's incident.
Rights groups, exiles and some experts say, though, that there is little evidence of a cohesive extremist movement operating in Xinjiang.
In 2009, some 200 people died in Xinjiang's regional capital Urumqi during riots which pitted Uighurs against the majority Han Chinese.

(Reporting By Dominique Patton and Ben Blanchard; Editing by Ron Popeski)
Posted by Claude Arpi at 5:59 AM