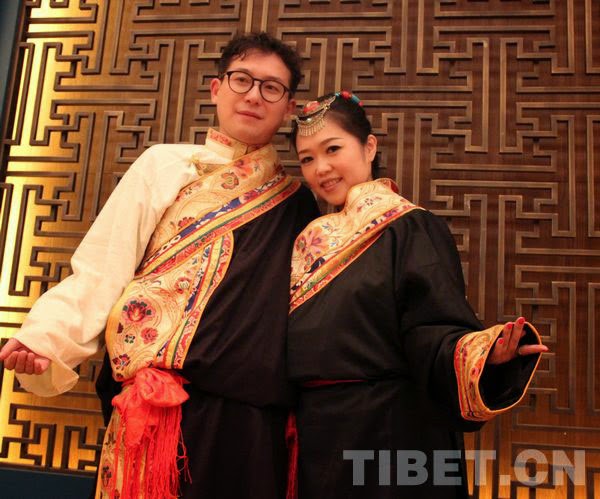 In June, I reported on this blog the new Chinese policy of 'Ethnic Mingling in Xinjiang and Tibet'.
Now, Beijing has decided to take the next step.
According to The South China Morning Post (SCMP),  a county in Xinjiang offers 10,000-yuan reward for Uygurs to marry Han Chinese.
The Hong Kong daily reports: "No takers so far for largely Uygur area's cash rewards for inter-ethnic weddings to promote integration; academic doubts they will work".
Perks and other cash incentives have been introduced to encourage people from 'ethnic minorities' (i.e. local Uygurs)  to marry members of the Han 'majority'.
After registering their marriages, 'inter-ethnic couples' in Cherchen county (under the the Bayin'gholin Mongol Autonomous Prefecture of the Xinjiang Uyghur Autonomous Region), can apply for a 10,000 yuan (US $1,600) annual allocation.
The local administration will also contribute 90 per cent of each 'mixed' family's medical expenses, not covered by existing government insurances.
According to the new rules, payments will be made each year, up to five years, ... if the marriage remains 'harmonious'.
A county official told SCMP: "Our major consideration was to stabilise Xinjiang and promote cultural integration among different ethnic groups."
Cherchen county, bordering the Tibet Autonomous Region, is apparently the first county in Xinjiang to try the new scheme. The average annual rural income of farmers is 7,400 yuan.
On top of the cash incentives, the local administration has promised education and health care subsidies to the couples and their children.
Today Cherchen county has a population of 100,000, out of which 72 per cent are Uyghur and 26 per cent Han.
An official however admitted that no new union had been registered since the scheme is in place.
In the June post mentioned above, I mentioned that Chen Quanguo, the Party Secretary in Tibet had also started promoting inter-marriage between Tibetans and Hans.

But no cash as yet for the Tibetans.
In the meantime, China Tibet Online reported a group wedding held in Lhasa on September 2.
Believe it or not, the 2014 Tibet Holy Wedding was sponsored by the Tourism Bureau of Tibet Autonomous Region.
The package tour (honeymoon included) will last 12 days from August 31 to September 11.
Apparently 15 Chinese couples from the mainland, have registered.
China Tibet Online says: "The wedding kicked off when the guests presented Hada [khata] to the new couples. Then, the bridegroom inserted a color arrow into the back of bride's clothes, with the meaning that the bride will belong to the bridegroom in all their lives. Next, the couples offered respectful chemar（a box containing Tsampa), drunk highland barley wine [chang] and accepted blessing of the living Buddha [rinpoche]".
A couple told the reporter: "We come to Tibet together, hoping to express the pure love to each other in this sacred place and leave the most beautiful memory in the life."
Amazing! 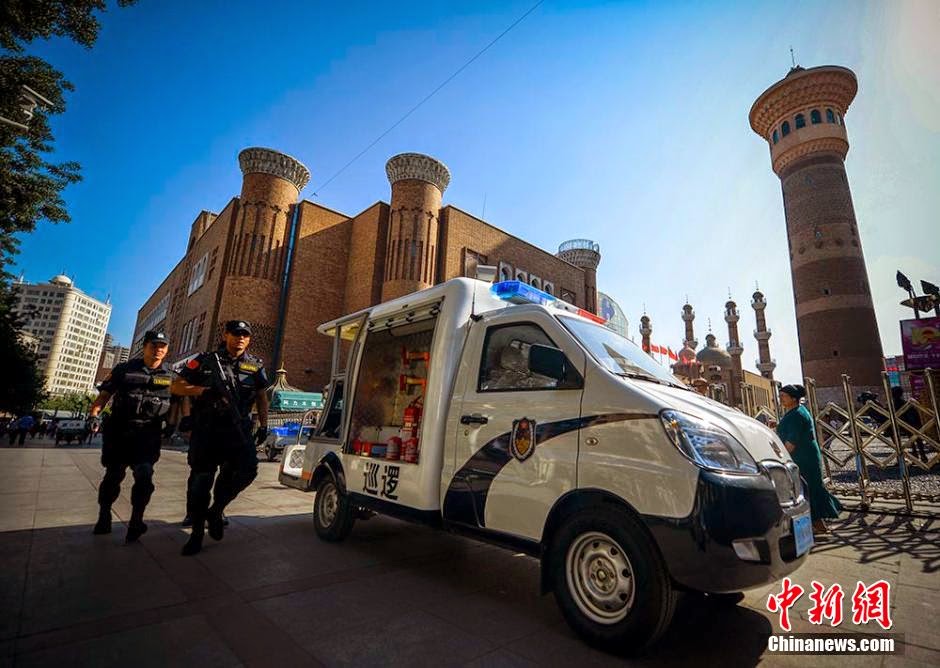 At the same time in Xinjiang, the police experimented a new type of 'anti-terrorism' electric patrol car, which could be seen in the streets of Urumqi.
The electric-powered car is fitted with advanced equipment such as police searchlight and real-time monitoring device.
The carrot and the stick, in other words.
What about if a Chinese girl marry a 'terrorist' local boy?
No answer as yet to this question.
Posted by Claude Arpi at 11:22 AM