The Year of the Horse: a Prediction

2014 will be the Year of the Horse (Horse-Wood for the Tibetans). It should be an Energetic Year.
Some have tried to predict the main features of the Year 2014.
The Weekly Newsletter Sincism, made 10 predictions which may turn correct (mostly in the economic and diplomatic fields).
The interesting point made by the  author (Bill Bishop) is that 2014 will witness an increase "recognition that Beijing has a well-crafted strategy, not ad-hoc and uncoordinated actions".
This might not be the case of India where ad hocism has been (and is) the rule.
In China, there is another aspect which is worth watching: the 'spiritualization of the Chinese society.
In October, I mentioned on this blog  'A Spiritual revival in China' with some extraordinary photos of Larung Gar in Kardzi Tibetan Prefecture of Sichuan Province (formerly Kham).
China Tibet Online publishes today an article entitled 'Beijing Lama Temple welcomes mass pilgrims in New Year'.
The Communist mouthpiece reported: "The first day of 2014 saw mass pilgrims to worship Buddha in the Lama Temple in Beijing."
It describes the scene at the Buddhist temple:


By 10:30, the temple had already taken in over 11,000 pilgrims. Even though the notion of vying for the most auspicious first incense had faded away, there were still a large number of people paying homage to the temple on the New Year's Day, which was also the first day of the last month of 2013 in lunar calendar.
By 7:30, the line people queuing in had reached the bus stop on the outside street, which was some 150 meters long. In order to keep warm in the cold winter morning, some kept stamping their feet while others rubbing their hands, and all wore down jackets.
Even though the Lama Temple in Beijing has started offering free incense to visitors since Dec. 10 2013 and forbids people bringing various incenses from the outside as a way of environment protection, there are still vendors peddling incenses around the temple.

The Yonghe Temple or ‘Lama Temple’ is a Tibetan monastery (Geluk tradition) located in the northeastern part of Beijing. Building and frescoes is a blend of Han Chinese and Tibetan styles.
Wikipedia says:

Building work on the Yonghe Temple started in 1694 during the Qing Dynasty. It originally served as an official residence for court eunuchs. It was then converted into the court of the Prince Yong (Yin Zhen), a son of the Kangxi Emperor and himself the future Yongzheng Emperor. After Yongzheng's ascension to the throne in 1722, half of the building was converted into a lamasery, a monastery for monks of Tibetan Buddhism. The other half remained an imperial palace.
After Yongzheng's death in 1735, his coffin was placed in the temple. The Qianlong Emperor, Yongzheng's successor, gave the temple imperial status signified by having its turquoise tiles replaced with yellow tiles which were reserved for the emperor. Subsequently, the monastery became a residence for large numbers of Tibetan Buddhist monks from Mongolia and Tibet, and so the Yonghe Lamasery became the national centre of Lama administration. The temple is said to have survived the Cultural Revolution due to the intervention of Prime Minister Zhou Enlai. It was reopened to the public in 1981.

My prediction for 2014 is that the spiritual search of the Chinese people will continue to intensify during the Year of the Horse.
President Xi Jinping should take it into account in his 'Chinese Dream' and his "Massline Campaign', if he seriously want them to be successful.
The question however remains: does Party Ideology can rhyme with Spiritual Aspiration?
Can a 'spiritualization of China influence Beijing's Tibet Policy?
I will not do any prediction on this one.
Here are some pictures of 'Lama Temple' on January 1. 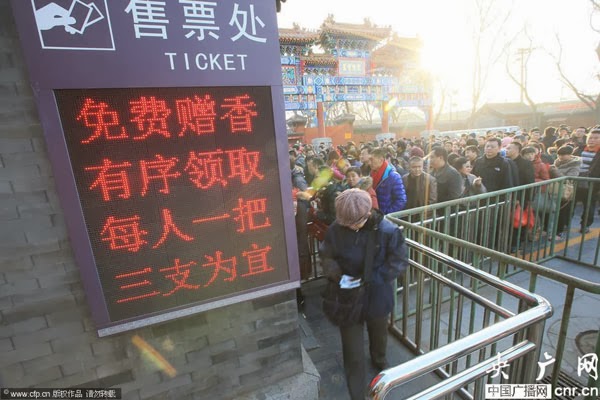 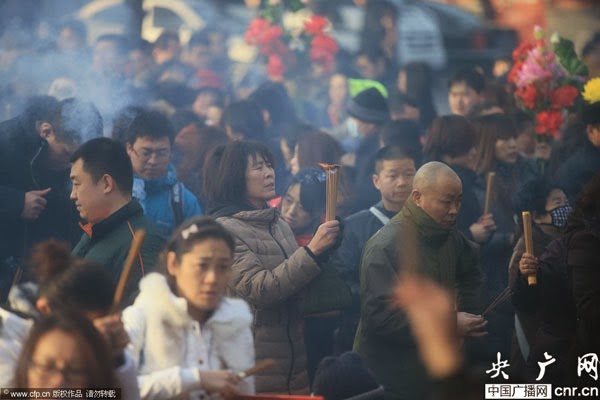 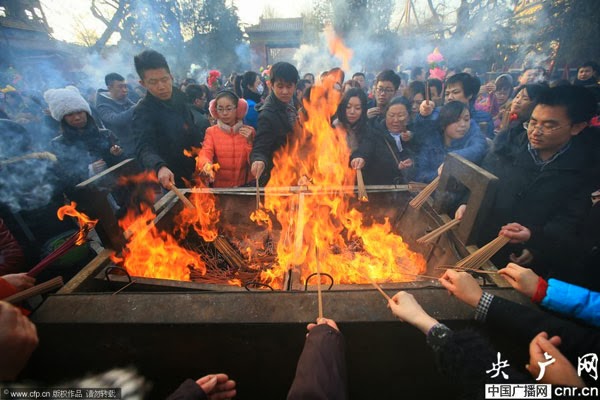 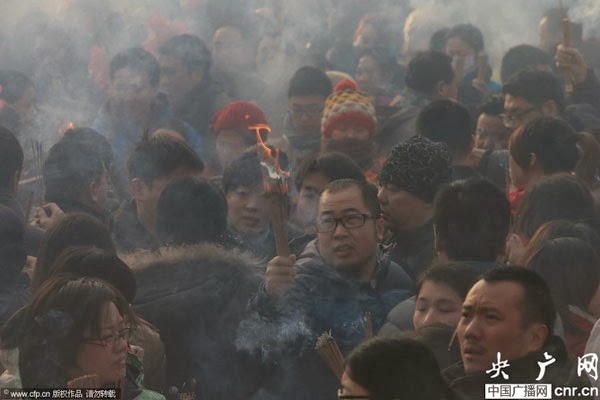 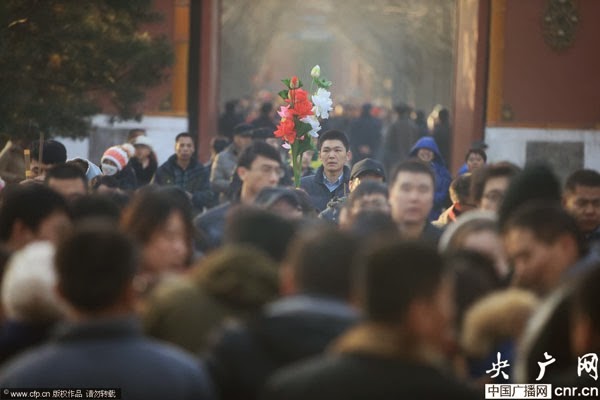 2. Xi Jinping will continue to consolidate power. The apparent ongoing purge of Zhou Yongkang and his allies will result in Xi having more control over both the security services and the military than any leader in decades;

3. Xi's appointment to head the leading group for comprehensively deepening reform is positive for reform prospects. Some had expected Premier Li Keqiang to lead the group and now see this move as a diminution of Li, but given that the scope of the group is much broader than just the economy it makes more sense for the General Secretary to lead it. Only Xi may have the authority and the bureaucratic power to push through reforms that affect so many entrenched interests (though of course reform will also bring new opportunities to some). If Xi is successful in rebuilding Party discipline through the Mass Line Campaign and the corruption crackdown then there is a decent chance the reforms will succeed. But there is a reason some in Beijing say that Xi is the Party's last chance to make the changes needed to keep it in power;

4. The corruption crackdown will intensify and while it will not solve the root issues it will be more successful than most have predicted. Zhou Yongkang may be the first tiger to fall in 2014 but there will be others. There will be increasing pockets of resistance as cadres are squeezed but Xi appears to have the power base to continue the crackdown. And business prospects will not improve for luxury goods merchants;

5. The economy will continue to struggle, in large part to due to the excessive buildup of corporate and government debt. The recent audit and the listing of "resolving risk associated with local government debt" as a key task in 2014 by the Central Economic Work Conference are signs of both how worried Beijing is and how serious it is taking the debt mess. There are no quick fixes though, moral hazard is a huge issue and while a debt crisis is unlikely (but never say never) Beijing's options are increasingly constrained and any overly aggressive efforts to rein in credit growth could dramatically slow the economy. GDP growth should come in around 7% (and there will be plenty of debate about how "healthy" or real" that growth is), the Shanghai Composite will end 2014 15% higher, the RMB will appreciate to between 5.8-5.9 to the US Dollar and first-tier and maybe second-tier city real estate markets will continue to see price appreciation, though at least one high profile real estate developer will be taken down as a scapegoat for the high housing prices;

6. The Party has made much progress towards its goal of seizing the commanding heights of the Internet and those efforts will continue, as will a continued shift in social media usage from Weibo to Wechat. The stepped up control of the Internet will continue part of the broader, ongoing ideological tightening;

7. Alibaba and the Hong Kong Stock Exchange will both make concessions by the second quarter that will allow the company to list on the HKSE. The IPO will be bigger than Facebook's even though Tencent's Wechat will increasingly be seen as serious threat and Laiwang, Alibaba's Wechat clone, will have little traction;

8. There will be more China pain for US technology companies in the wake of the Snowden revelations. Do not be surprised if Beijing bans military and security personnel and cadres above a certain rank from using Apple products;

9. There will be progress on cleaning up the environment though the problems are so huge that not much will change substantively in a year. But there will be more bureaucratic will and policy support as Beijing has come to realize that the environmental disaster is one of the core threats to the country. One of my predictions for 2013 was that the environmental issues would lead to "more protests as citizens become more aware of their rights and are emboldened to protect them." In fact there were fewer large scale ones than in 2012 as Beijing narrowed the public sphere.

10. Verbatim from last year's predictions: China’s external environment is increasingly complex. Mr. Xi is likely to work hard on maintaining stable relations with the United States, while at the same time expanding China’s military capabilities and asserting its regional interests. China has unsettled its neighbors with its approach to the disputes over the Diaoyu/Senkaku Islands in the East China Sea and the various islands in the South China Sea. Both issues look intractable, so a solution is unlikely in 2013. Expect a quickening arms race in Asia, increasingly nationalist rhetoric, continued tensions with Japan, Vietnam and the Philippines and growing risks of misunderstandings — and possible mishaps — as the various countries send more vessels into the disputed areas.

What I will add for 2014 is that there will be increasing recognition that Beijing has a well-crafted strategy, not ad-hoc and uncoordinated actions, that it believes will demonize and isolate Japan in the region and force the US to choose between supporting an increasingly unpopular regional partner or applying pressure on Japan such that other countries will see the US as an unreliable ally. I am not convinced it will work but it does look to be a significant part of Beijing's strategy. And Prime Minister Abe is starting to look like a gift for Beijing.

Of course any unforeseen, exogenous events could render some or all of these non-operative...
Posted by Claude Arpi at 8:00 AM