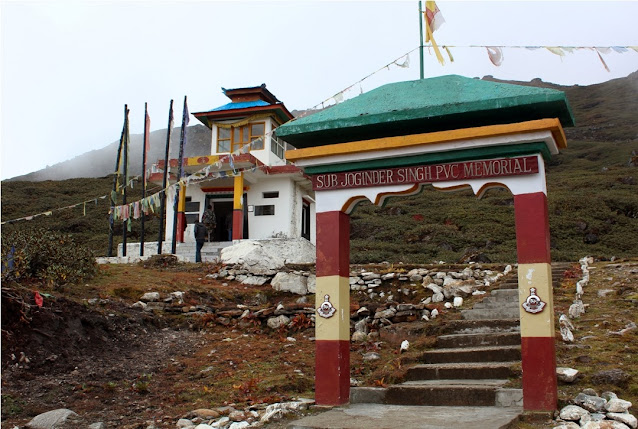 The Press agency PTI reported that the Arunachal Pradesh Governor Lt. Gen. (Retd) Nirbhay Sharma paid homage to martyrs of 1962 war at the Saheed Smarak, popularly known as 'Hut of Remembrance' in Anjaw district of Arunachal, not far from the Tibet border.
Lt. Gen. Nirbhay Sharma also “laid wreaths at war memorials of Walong and Namti Plains and visited the Namti Valley, where fierce battle was fought in 1962 by the Indian forces against the Chinese”, says PTI.
The Governor, on a two-day maiden trip to the district, rightly stated that “The [Anjaw] district is not only an important part of the state but of the country as well. …People of the country feel proud of you as you are the sentinels."
He called upon the local youth to prepare themselves to join the second battalion of Arunachal Scouts and appealed to the public leaders and Gaon burahs [village headmen] to groom their children for a job in the Indian Army.
In Walong, a canopied War Memorial  has been erected for those who died in 1962. The following verses, written of a war veteran, are inscribed:


The sentinel hills that round us stand
bear witness that we loved our land.
Amidst shattered rocks and flaming pine
we fought and died on Namti Plain.
O Lohit gently by us glide
pale stars above us softly shine
as we sleep here in sun and rain.

It is a positive sign that India finally commemorates her sons who died during an uncalled for War started by China to take revenge on India for providing refuge to the Dalai Lama.
However, it is regrettable that the history is not always properly recorded.
This is the case of the Bumla Memorial which saw the heroic defence by the 1 Sikh led by Subedar Joginder Singh.
At Bumla, the marble plate mentions: “This position was overwhelmed by the Chinese and Subedar Joginder Singh attained martyrdom at this very rock site.”

But Joginder Singh died in a PoW camp in Tibet and not in Bumla.
The official report (History of the Conflict with China, 1962, prepared by the Ministry of Defence, Government of India) says it clearly:


2- Actions on Bum La Axis
(ii) Attack on the IB Ridge
After over-running the Assam Rifles’ post at Bum La, the enemy attacked the forward platoon position of ‘D’ Coy the Sikhs at the IB Ridge, at about 0500 hrs [page 132] with the objective of capturing the ‘Twin Peaks’. As the climb from the bed of the Nullah to the platoon position was steep, the Sikhs were able to inflict heavy casualities on the Chinese, compelling them to retire. Heave mortar OP at IB Ridge also engaged the enemy with mortars.
In the meantime the Platoon Commander, Sub Joginder Singh, asked for more ammunition from the Company Headquarters. But by that time the enemy had succeeded in cutting the platoon’s land communication with the Coy Headquarters and had concentrated at Tongpeng La. The Coy Cdr, Lt. Haripal Kaushik, asked Sub Singh to retire to the Coy Headquarters but in reply, the latter assured that the enemy would not be allowed to get through the IB Ridge to the “Twin Peaks’. In the fighting, Sub Joginder Singh was wounded and made prisoner. While in the enemy’s custody, he died because of his wounds. He was awarded PVC (posthumous) for his bravery [page 133].

The Param Vir Chakra Citation of Joginder Singh rightly said that he was ‘finally overpowered’, it does not say that he died on the spot. Here is the citation:

What really happened?
The badly-wounded Subedar was taken prisoner to Tibet, he must have been carried by his comrades, till a PLA truck took them (from Marmang?) to the PoW camp.
When he reached the camp in Central Tibet, the Chinese surgeon informed him that his leg had to be amputated. He refused because he was due for promotion as a subedar-major.
He thought that if amputated, he would lose his due promotion.
The Chinese even approached one of the senior Indian Commanding Officers requesting the latter to convince Joginder Singh that he had no choice but to be amputated. The valiant Subedar refused; unfortunately he passed away due to gangrene soon after.
This story has been confirmed to me by two eye-witnesses.
It would take nothing away from the hero of Bumla, Param Vir Chakra Joginder Singh, if the factual history was recorded in Bumla.
On the contrary, the truth would be an homage to Joginder Singh.

A warrior's tale: How it all began, an interview with Capt. Bana Singh, PVC (J&K Light Infantry)

The Hero of Tiger Hill, an interview with Yogendra Singh Yadav, PVC (18 Grenadiers)
Posted by Claude Arpi at 3:15 PM

Great article.
A 'Flash Back' for me - as I recall a number of my LRPs in Kameng Division of erstwhile N.E.F.A.Visit to Bum La was nostalgic !