Take a deep breath: the PLA in Tibet

China Tibet Online informs us that the People's Liberation Army's soldiers guarding the border with India, can finally sleep.
The Chinese publication writes: "Oxygen chamber benefits soldiers in Tibet".
It explains how: "At a border station of an altitude of 4,700 meters high in Lhoka Prefecture of SW China's Tibet Autonomous Region, a border guard was interviewed newly after his sleep and he told the reporter: 'I've been in the border army for 7 years, but last night I slept much better than ever before'."
Lhoka is the area north of the McMahon Line, opposite Arunachal Pradesh.
Though border guards are usually not supposed to sleep, in this case, they are probably aware that India is a peaceful neighbour. India is indeed not the reason to their sleepless nights.
The caption of the photo accompanying the article reads: "Border soldiers and their spouses are experiencing the hyperbaric oxygen chamber treatment".
The reporter continues: "Thanks to the hyperbaric oxygen treatment newly adopted at the No. 41 Hospital of the PLA, he [the interview frontier guard] is not the only one benefiting from a sound sleep after treatment."
According to Wikipedia: "Hyperbaric medicine, also known as hyperbaric oxygen therapy (HBOT), is the medical use of oxygen at a level higher than atmospheric pressure. The equipment required consists of a pressure chamber, which may be of rigid or flexible construction, and a means of delivering 100% oxygen. Operation is performed to a predetermined schedule by trained personnel who monitor the patient and may adjust the schedule as required. HBOT found early use in the treatment of decompression sickness, and has also shown great effectiveness in treating conditions such as gas gangrene and carbon monoxide poisoning." 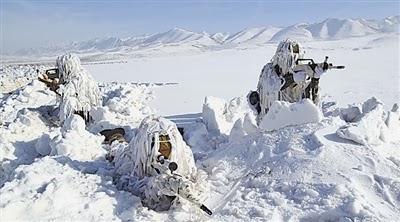 The Chinese article asserts: "In the past, due to the plateau hypoxia, border guards in Tibet could barely manage to sleep more than 3 hours after returning from holidays from inland China as their bodies were in need of readjustment to the thin air in Tibet. The symptom usually gets worse in the winter. Due to the lack of sleep, many soldiers have suffered from immunity drop, agitation, hair loss and other symptoms."
We are now informed that to 'crack the hard nut', a hyperbaric oxygen chamber has been installed to help the soldiers to adapt to the anoxic environment. The new equipment was introduced in May 2013. It is said that soldiers (and their spouses), who suffer from high altitude pulmonary edema, sleep disorder or just back to work from inland cities are free to use the chamber.
Take a deep breath!
The Indian jawans will be jealous to discover that the border areas in Tibet is a family posting.
More seriously, last year, I posted excerpts of a fascinating document which exposed the psychological trauma faced by the People's Armed Police (PAP) in Tibet. Do the PLA troops face similar difficulties?
Probably!
One solution for the PLA leadership would be to employ local personnel, but the Han bosses probably do not trust (perhaps rightly) the Tibetans.
This is another issue.
Posted by Claude Arpi at 7:36 AM