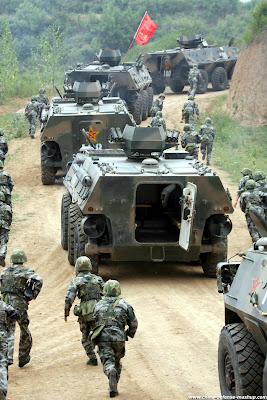 As General Liang Guanglie, China's Defence Minister arrives in India, the website  China-defense-mashup publishes a (poor) translation of an article of Major General Qiao Liang, the co-author of the famous book, “Unrestricted Warfare”.
On August 29, Qiao Liang wrote an article in the China Youth Daily suggesting that China should use 'unrestricted warfare' in South China sea Islands Dispute.

During his visit, the Chinese Defence Minister will probably reiterate Beijing's "Peace Rise of China" policy.
In this context, it is interesting to keep in mind that General Qiao's theory is also applicable to the border issue with India.
A few years ago, I wrote about this concept, here are some extracts:


A remarkable book, largely unnoticed in India except in specialized circles was published by the Literature and Arts Publishing House in Beijing a few years ago. Unrestricted Warfare has been written by Colonels Qiao Liang and Wang Xiangsui, two very brilliant senior officers of the People's Liberation Army.
Qiao and Wang's started their fascinating research with the US's success against Saddam Hussein's army during the Gulf War of 1990-1991. Drawing lessons from this conflict, Unrestricted Warfare details how a nation like China, can face the technologically advanced US army, overcome this advantage and defeat the enemy.
This war manual came to the notice of the CIA after the September 11 attacks: the Chinese colonels several times suggest ways in which unrestricted war could be waged against America by terrorists
In their foreword, the editors of Unrestricted Warfare point out the authors’ "advocacy of a multitude of means, both military and particularly non-military, to strike at the United States during times of conflict."
Blending the ancient martial arts theory and the knowledge of the high-tech era, the authors explain how the strong can be defeated by the weak through merciless unconventional methods: “the first rule of unrestricted warfare is that there are no rules, with nothing forbidden."
They say: “Whether it be the intrusions of hackers, a major explosion at the World Trade Center, or a bombing attack by bin Laden, all of these greatly exceed the frequency bandwidths understood by the American military… This is because they have never taken into consideration and have even refused to consider means that are contrary to tradition and to select measures of operation other than military means."
The fact that the bombing of the WTC is mentioned resulted in US security agencies translating the book. The Chinese White Paper on Defense put it thus: “The forms of war are undergoing changes from mechanization to informationalization... Confrontation between systems has become the principal feature of confrontation on the battlefield. Asymmetrical, non-contiguous and non-linear operations have become important patterns of operations.”
One chapter speaks of "Ten Thousand Methods Combined as One: Combinations That Transcend Boundaries". It is the art of combining different elements of these various forms of warfare. What are these forms?
Terrorism is of course mentioned the most often, but it is just one of the many ways of unconventional warfare identified by Unrestricted Warfare. To cite a few others:

To Use “Unrestricted Warfare” in South China sea issue
August 29, 2012
China Military News by China-defense-mashup
Qiao Liang, PLA Major General and the co-author of the world famous book “Unrestricted Warfare” recently wrote an article on August 29th’s “China Youth Daily” to suggest China to use “Unrestricted Warfare” in South China sea Islands Dispute.
In his article, he says that someone once asked him that what his great idea is to solve the problem of the South China Sea from the point of view of the “unrestricted warfare”.
His answer is to learn [about] United States, think about how United States deals with such problems, then think [about] the U.S. so-called “mistaken bombing” on Pakistan’s border posts and other countries.
The basic principle of “unrestricted warfare” is a trick-combination and asymmetric attack.
In the South China Sea issue, “unrestricted warfare” means playing a combination of boxing. To avoid a war does not mean non-use of military forces and does not mean that there is no conflict.
The key is how to control the conflict intensity. That indicates that some “special action” is necessary to clearly demonstrate China’s bottom line, but not let the whole country be pushed up to full-scale war against normal economic development.
He believes that China in recent years began to grow in economic and military strength, but the most important is that the strategic thinking and technique should actively keep up with the changes in China’s own situation, but also to keep up with changes in the international situation.
Originally, China had a long period of policy of “Shelving differences and seeking joint development”. Now this way has a dead end. Encountered such a situation, one approach is using military forces to get back Islands which belongs to me; another option is a negotiated settlement.
In general, the solution of international disputes, complete none of “Exchanging interests” is impossible.
Sovereignty belongs to China, this is nothing indisputable, but “joint development” will bring you economic benefits. This is the bottom line.
Modern military confrontation has variety of means. China can deploy military force, and may even have an accidental conflict, but this kind of “Edge ball” must get strategic advantages and let adversary “suffering loss without redress”.
This is the game master, and this is what non-war military operation means under the context of China’s sea dispute in Diaoyu Islands and South China Sea issue?
Qiao Liang thinks that China’s “keeping a low profile” strategy is not passive enduring, but to play a low-key, then must do the right things for national interests.
Qiao judges that if not really touched the the core interests of the U.S., the United States is unwilling to even dare to make “Hot War” with China for the Philippines and other ASEAN countries in the South China Sea issue.
Strategic interests between China and the United States have a greater need for interdependence. Therefore, the interests of the two countries can not be kidnapped by a small country.
The Sino-US conflict’s final result can only be a lose-lose situation to provide opportunities for other third parties.
Qiao Liang says China needs the greatest wisdom, most brilliant strategy and most tough patience in the treatment of the U.S. factor.
Hillary Clinton has repeatedly claimed that the United States wants to use smart power, China can also learn it.
Posted by Claude Arpi at 3:53 PM