A new boss for the United Front Work Department 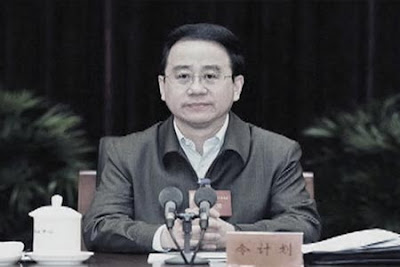 The appointment of Ling Jihua as the boss of the CCP's United Front Work Department has an interesting collateral.
It means that even after retirement, President Hu Jintao will continue to keep his fingers in the Tibetan pie through his protégé.
Contrary to what the Reuters article quoted yesterday believes, Xi Jinping may not be in a position to give a new lead in the Beijing-Dharamsala relations.
Due to his closeness with the Chinese President, Ling has helped tailoring China's Tibet policy for many years (first as a Director of the Central Policy Research Office and later as Hu’s Secretary in the General Office of the Central Committee).
Both have always shared theirs views on the subject.
As CCP's General Secretary, when he attended the annual meetings of the National People's Congress and The Chinese People's Political Consultative Conference, Hu had to be attached to a regional or Central organization.
For seven years, Hu was a member of the delegation from Tibet.
Three years ago, he was replaced by Ling Jihua and Wang Huning, till yesterday Secretary of Party's Central Secretariat (he is still the Director of Policy Research Office).
Of course rumours have circulated that Ling had become close to Zhou Yongkang, the powerful member of the Standing Committee when Ling's son was killed in a car accident on March 18. Ling's son is said to have been died in his car while having sex with two young women — an account never proven.
A Taiwan publication said that  "Ling needed Zhou's support to cover up the embarrassing story. Ling would have promised to convince Hu to allow Zhou to remain in his position on the standing committee and stop any investigation against Zhou in connection with the Bo Xilai affair in exchange for help with the cover-up."
This story, true or false, has no connection with China's Tibet Policy, though it may explain Lings' relative demotion.
We have to wait to see how the future unveils.
Many issues will probably depend of the balance of power in the next Standing Committee of the Politburo.

Blow for president Hu Jintao as key ally's route to Politburo is blocked
Choi Chi-yuk
South China Morning Post
September 1, 2012
Blow for president as trusted aide he hoped to see promoted to Politburo's supreme Standing Committee is shuffled out of key positions
President Hu Jintao's most trusted aide, Ling Jihua has been appointed to lead the party's United Front Work Department - a strong indication that scandals have damaged the rising star's hopes of securing a seat on the powerful Politburo this year.
Another Hu ally, Li Zhanshu , will succeed Ling as director of the General Office of the Communist Party's Central Committee.
The moves, announced yesterday, are the first of several reshuffles expected before top posts change hands at the 18th party congress this autumn. The transfer suggests that Ling's career has been capped, since none of his three predecessors in the United Front post, Wang Zhaoguo , Liu Yandong and Du Qinglin , were elevated to the Politburo during their tenures.
While an obvious setback for Ling, the move could also be seen as a blow to Hu, who had shepherded his rise over the previous two decades and was widely believed to be pushing for his promotion to the Politburo's supreme Standing Committee.
Analysts believe Ling, 56, lost an intense behind-the-scenes fight for a better post, such as succeeding Liu Qi as Beijing party boss or Li Yuanchao as the head of the party's Central Organisation Department, because of scandals widely publicised on the internet and in overseas media.
The scandals - including the death of his only son in the crash of an expensive sports car in Beijing in March, in which two women were also seriously injured - made it harder for the party to justify giving him a more high-profile position.
"Ling's political prospects apparently suffered a blow from the widespread speculation over the past couple of months," said political analyst Chen Ziming . "This speculation is not entirely groundless."
Nonetheless, the transfer suggests that Hu could help his long-time secretary find a reasonably soft landing as minister in charge of the party's united front work. Ling's new portfolio includes Hong Kong affairs, negotiating sensitive cultural and religious issues in places such as Xinjiang and Tibet and engaging non-communist political organisations.
Ling has been a secretary to Hu since 1999. He has long been seen as a key ally the president was grooming for high office to help him retain political influence once he gives up the reins of power.
Ling appeared primed for advancement in 2007, when he was appointed director of the General Office, which has been a springboard for rising stars. Premier Wen Jiabao served in the office from 1986 to 1993.
A source familiar with Beijing's affairs in Hong Kong said Ling knew the city well, as he had assisted Vice-President Xi Jinping and his predecessor, Zeng Qinghong , with Hong Kong affairs since 2004.
Posted by Claude Arpi at 7:37 AM