One need not advertise for Tawang 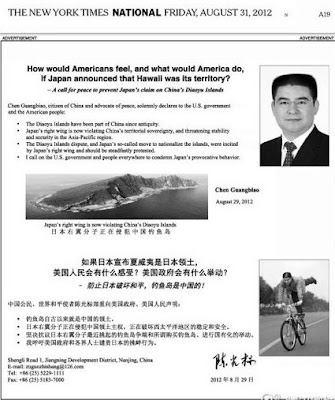 A Chinese businessman, Chen Guangbiao has paid for an advertisement in The New York Times to 'inform' the American public that the Diaoyu Islands is part of Chinese territory.
The advertisement asks: “How would Americans feel, and what would America do, if Japan announced that Hawaii was its territory?”
Chen should have asked himself: “How do Indians feel, when China announces that Arunachal Pradesh is part of its territory?” and “How do the Monpas of Tawang feel, when China announces that they lived in Southern Tibet?”
The mere fact that China, through one proxy, has to advertise this issue in the US media is a proof that the Island does not  belong to them.
The main question to be asked is: why a State, calling itself peaceful, picks up fight over territorial issues with each and every of its neighbours?
The answer is that China has a big problem here.
I hope that the NRIs will not advertise in The New York Times or The Washington Post about Aksai Chin or Arunachal.
It would demonstrate that India is not sure of her legal stand on this issue. It is not the case.

Chen Guangbiao Claims There Are Japanese Media Willing to Advertise Diaoyu Islands Advertisement for Millions
Chen Guangbiao Advertises on New York Times: “The Diaoyu Islands is Chinese Territory”
Chinese entrepreneur and CEO of Jiangsu Huangpu Renewable Resources Recycling Company Chen Guangbiao published a half-page advertisement on America’s New York Times on August 31, “solemnly declares to the U.S. Government and the American people”, that the Diaoyu Islands (aka Senkaku Islands) have been the territory of China since antiquity. Chen Guangbiao told the reporter of this article yesterday [September 1] that the purpose of publishing this ad is to show the determination of Chinese entrepreneurs in defending China’s sovereign rights. Currently, he’s making arrangements with Japanese media to publish the Diaoyu Islands ad.
Calling on American people everywhere to condemn Japan’s provocation
The statement [advertisement] says, “Japan’s right wing is now violating China’s territorial sovereignty, and threatening stability and security in the Asia-Pacific region”, “the Diaoyu Island dispute, and Japan’s so-called move to nationalize the islands, were incited by Japan’s right wing and should be steadfastly protested”, “I call on the U.S. government and people everywhere to condemn Japan’s provocative behavior”. This advertisement/statement asks: “How would Americans feel, and what would America do, if Japan announced that Hawaii was its territory?” The advertisement/statement is published in both English and Chinese.
After looking it up reporter came to know that Chen Guangbiao’s ad was published on The New York Times on August 31 on the lower half page of the 19th page of the “US News” section, and the visual effect was eye-catching. Three photographs were also published with the ad, respectively of a head portrait of Chen Guangbiao, a picture of the Diaoyu Islands, and a photo of Cheng Guangbiao’s “stunt bicycle-riding” with one leg. Chen Guangbiao’s identity in this ad is that of a “citizen of China, advocate of peace”. In the ad was also his handwritten signature and contact informant.
Among 1,000 Americans, only 20 know about the Diaoyu Islands
Yesterday [September 1] afternoon, this reporter got in touch with Chen Guangbiao who is currently in mainland China. Chen Guangbiao said, he saw recently a series of provocative behavior by Japan on the Diaoyu Island’s dispute, and has been very angry. It was about early this August when he came up with this idea of advertising on American mainstream media to declare China’s sovereign rights.
From August 12 to 23, Chen Guangbiao did a survey of over a thousand ordinary Americans in cities like New York, Boston, San Francisco, etc. and found out that only 20 some of them know about the Diaoyu Islands. “I found out that the Americans don’t know about the Diaoyu Islands at all, and this firmed my determination to make the ad even more.”
A Japanese newspaper has already agreed to publish the ad
After Chen Guangbiao published his ad on The New York Times, there was widespread applause on the [Chinese] internet, praising “Brother Biao isn’t ridiculous this time”, but for an entrepreneur who has a history of controversy, there were also some who questioned if he was just using this opportunity to pull another publicity stunt. To this, Chen Guangbiao thinks patriotism doesn’t need to be low-key, but one must be rational and tactfully patriotic. The combination of Chinese and English is to avoid ambiguity and misinterpretation, and as for the image of him “stunt bicycle-riding” appearing in the ad, Chen Guangbiao claims it was purely to increase the amount of attention the ad would receive, as well as to promote environmental protection.
According to Chen Guangbiao, he currently is also in discussions and arrangements with some Japanese media about publishing the Diaoyu Islands ad, that the process is a little difficult, but already one rather influential Japanese newspaper has preliminary agreed, but quoted the astronomical price of “several tens of million yen” (several million RMB). “As long as they agree, I’ll pay as much money as it takes to post [the advertisement],” Chen Guangbiao says.
Posted by Claude Arpi at 7:51 AM