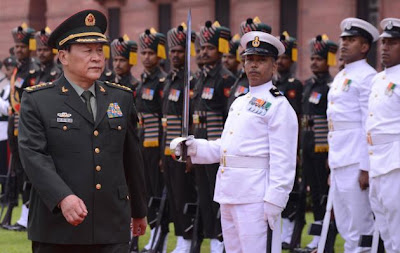 In February this year, Northeast Today reported a "spurt in Chinese Intrusions in Chaglagam".
The publication from Arunachal complained about India’s reluctance to upgrade its resources along the international border in Arunachal Pradesh, giving the 'glaring' example of the border demarcation along Indo-China border near Chaglagam outpost in Anjaw district.
Northeast Today explains that: "due to lack of proper boundary demarcation, the Chinese Army often intrudes through two passes of Glai Takre and Hadira Takre which is about 100 km from last ITBP base camp situated at Chaglagam."
The article continues:


Anjaw Zilla Parishad Chairperson B Tega informed that the two passes are known as natural border between the two countries by the Mishmi community. He confirmed that, the Chinese Army often intrudes in the area and puts up unknown signs and symbols on stones and trees inside the Indian Territory. However, after the Chinese departure, Indian military patrolling team is quick to damage or erase the Chinese military marks and signs. He said that due to the lack of establishment of Indian military camp within the Indian Territory in the interior places, Chinese frequently conducts patrolling in Indian Territory.

The last ITBP post situated at Chaglagam is about 100 km away from LOC [LAC] The PR leader suggested that “the Indian government needs to establish military camp at Tanya, Pompom and Laitakru areas for security and easy monitoring of border areas”.  Meanwhile, Chaglagam ASM Mailu Tega said that “due to non availability of proper motorable road from Chaglagam to Glai Takre and Hadira Takre, the Indian patrolling team takes 4 to 5 days to reach the border, which she says, could pose a danger during emergency. She urged the government to widen the Chaglagam-Hayuliang road for transportation of military and other heavy vehicles.
Tega further sought Centre’s intervention for construction of road from Kibitho to Anini, Chaglagam to Desali (Lower Dibang Valley), Chaglagam to Glaitakre and Hadira Takre for the easy movement of the military. The Chinese government has connected its border area with highways. On the other hand, India is yet to make any roads leading to all border areas in Arunachal Pradesh even today. With Centre reluctant to step up infrastructure development at border areas, it is unlikely that such intrusions by Chinese Army would end over night. The ball off course is in the hands of the Centre and state government. 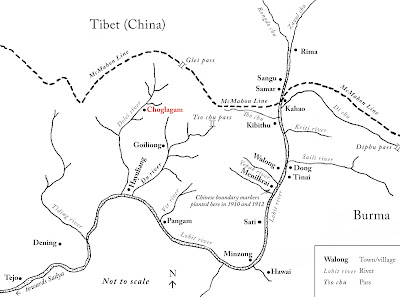 I wonder if the issue of infiltrations have been taken up with General Liang Guanglie, the Chinese Defence Minster during the latter's visit to Delhi.
It was probably not part of the PLA's diplomatic offensive, less than 2 months before the 'celebrations' (for the Chinese) of the 1962 War.
Another problem not mentioned by the Northeast Today's article is the infiltration between the main valleys, through less known passes.
Of course, in these cases, the PLA will argue that it has nothing to do with the incursions, it is only Tibetan 'herders' who enter India's territory by 'mistake'.
Anyway, General Liang Guanglie most have had a jolly good time in India, if he tipped his IAF escort with one lakh of rupees!
This is called détente, (before the tough power struggle at the 18th Congress in Beijing next month).

Military ties for peace
China's Daily
2012-09-05
On Sunday, Liang Guanglie, Chinese state councilor and minister of defense, arrived in India for a five-day visit. He also has gone to Sri Lanka and will soon travel to Laos.
The same day, Ma Xiaotian, deputy chief of the general staff of the People's Liberation Army, left Beijing for Vietnam, Myanmar, Malaysia and Singapore.
Then on Monday, Wu Shengli, PLA naval commander, started on a trip to Turkey and a deputy chief of staff of the PLA Navy arrived in Indonesia.
General Liang's current visit to India is the first a Chinese Defense Minister has made to that country in eight years. It remains unclear whether his talks with Indian officials will touch on a long-standing border dispute that is partially responsible for the neighbors' distrust of each other. Expectations are running high that the visit may lead to a new session of the "hand-in-hand" military drills that Indian and Chinese troops have conducted together. General Ma's delegation will hold consultations on security issues with Vietnam, Malaysia and Singapore.
We have heard much lately about military options, and sensed veiled military threats in discussions concerning territorial disputes over the Huangyan and Diaoyu islands. And we have witnessed public indignation arise at home following provocations by foreign claimants and seen decision-makers come under greater pressure to get tough. But we have heard nothing that is provocative from our own defense authorities. That's why we wonder what the White House was thinking of when it once again admonished countries in the region to resolve their disputes without resorting to coercion.
Outsiders with ulterior motives dislike that the PLA has forged closer ties with other militaries in the region. But that is exactly what the PLA needs to do and should do more of.
These territorial disputes would not be threatening the entire region's safety had there not been instigations from outsiders.
The PLA now has the difficult responsibility of explaining its non-offensive strategy and need to expand, as well as show its willingness to work more closely with other militaries in the region. A greater amount of mutual confidence among militaries in the region will prove a fundamental guarantor of peace.
They have an obligation to show that countries in this part of the world are capable of solving their problems by themselves.
(China Daily 09/05/2012 page8)
Posted by Claude Arpi at 6:13 AM