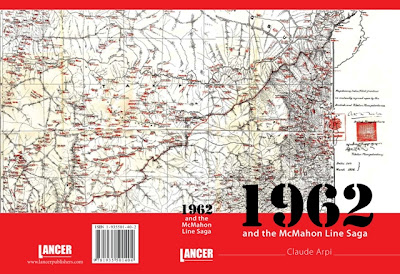 My new book, 1962: The McMahon Line Saga, published by Lancer Publishers will be released in October.
It deals with the main cause of the 1962 War with China: the McMahon Line.
In the next few weeks, I will post on this blog documents, articles and extracts of the book.
In the meantime, you can visit my website and  access a large number of archival documents on the 1962 Sino-Indian conflict.
Click here to read...

About the Book
Fifty years ago, India went through a tragic event which has remained a deep scar in the country’s psyche: a border war with China.
During the author’s archival peregrinations on the Himalayan border, he goes into some relatively little known issues, such as the checkered history of Tawang; the British India policy towards Tibet and even the possibility for India to militarily defend the Roof of the World.
The author also looks into why the Government still keeps the Henderson Brooks Report under wraps and what were Mao’s motivations for ‘teaching India a lesson’.
Throughout this series of essays, the thread remains the Tibet-India frontier in the North-East and the Indo-Chinese conflict.
The more one digs into this question, the more one discovers that the entire issue is intimately linked with the history of modern Tibet; particularly the status of the Roof of the World as a de facto independent nation.
British India had a Tibet Policy, Independent India, did not.
This led to the unfortunate events of 1962.
Posted by Claude Arpi at 2:43 PM