Negotiations with a demoted leader 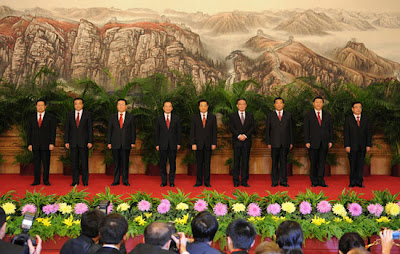 The media mentions again of the 'demotion' of Ling Jihua, Hu Jintao's protégé following the car accident of Ling's son, (I briefly mentioned it yesterday).
Now The South China Morning Post writes: "The car - a Ferrari according to some of the sources - crashed in Beijing on March 18 in an embarrassment for the ruling Communist Party, sensitive to perceptions that children of top party officials live rich, privileged lifestyles completely out of touch with the masses. ...The car crash, the details of which are still shrouded in mystery, reportedly involved the son of Ling Jihua, 55, who state media said was dropped at the weekend as head of the party's General Office of the Central Committee. It is a powerful post, similar to cabinet secretary in Westminster-style governments. Ling is very close to Hu."
The article added: "Over the weekend, Ling Jihua was appointed head of the Communist Party's United Front Work Department, a less influential position than his current post, in a move that was viewed as a setback for President Hu's efforts to retain major influence in the next administration."
It also means that when the Tibetan Administration in Dharamsala speaks of reopening the negotiations with Beijing, they have to realize that they will have to deal with Ling and his deputy.
It is doubtful that a 'demoted' leader can deliver the goods.
But in China, we never know.

Tibetan govt in exile to give fresh push to talks with China
PTI Sep 2, 2012,
SHIMLA: The Tibetan government in exile is hoping to give a fresh push to the stalled dialogue with China this December, once the leadership change takes place in Beijing.
To continue the dialogue process, the Tibetan Task Force on Negotiations will meet in December after the new Chinese leadership will assume office, the government-in-exile said in a statement issued here on the 52nd anniversary of Tibetan Democracy Day.
The dialogue was stalled since 2010 and two special envoys of Tibetan spiritual leader, the Dalai Lama, in talks with Beijing since 2002, had resigned in June citing the 'deteriorating' conditions in Tibet and frustration over lack of positive response from Chinese side to the dialogue process.
The statement said the Tibetan 'Kashag' and Parliament has decided to hold the second special general meeting of Tibetans in Dharamshala from September 25 to 28 to discuss ways and means to address the "urgent and critical situation" in Tibet.
Advocating middle-way policy and resolving Tibet issue peacefully through dialogue, the government-in exile said, "Both for Dharamshala and Beijing, this is a win-win proposition and we also welcome the US secretary of state Hillary Clinton's recent call on the Chinese government to resume serious dialogue with the Tibetan leadership."
It asserted that the Tibetan spirit and their quest for freedom "cannot be crushed by China's military might."
"Under the continued occupation and oppressive polices of the Chinese government, 51 Tibetans have set themselves on fire and sadly, 42 have died," the statement said.
"To understand the self-immolations, it is crucial to know that no space exists in Tibet for freedom of speech and other conventional forms of protest and even participant in a simple demonstration could face arrest, torture and even death. These conditions help explain the terribly high number of self-immolations in Tibet," the statement said.
The government asked Tibetan people to remain vigilant to counter the hard line Chinese leaders efforts to undermine the Tibetan cause.
Posted by Claude Arpi at 8:04 AM