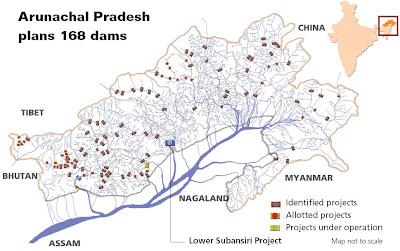 A few months ago, I wrote on this blog: "Dam is Money".
I then quoted from an article in The Hindustan Times: "From 2005 to January 2012, the Arunachal Pradesh government collected Rs 1,333 crore for as many as 199 projects as upfront premium and processing fees."
Rs 1,333 crores without doing anything, except promises, that is easy money.
The CAG is slowly waking up.
It has found "a display of complete non-adherence to rules concerning transparency and competitiveness": four dams allotted to NHPC were illegally given to private firms and joint ventures.
However, a group of  respected environmentalists believes that the CAG has prepared an 'extremely weak, inadequate non-audit' report.
In a Press Statement issued on September 3, 2012, the environmentalists commented:


The CAG issued a press release on Aug 31, 2012 for its “Performance Audit Report No. 10 of 2012-13” of hydropower projects for the 11th 5-year plan ending on March 31, 2012. This CAG audit is an extremely weak and inadequate work of the CAG. In fact it does not really audit the performance of hydropower projects at all. The audit fails to raise many of the fundamental issues related to the hydropower projects. It does not draw strong enough conclusions that are warranted based on its audit. Its recommendations are even weaker and do not address the issues raised in the conclusions. It seems like more of a business as usual, status quoist effort that does not do justice to the formidable reputation that the CAG has attracted through some of its exemplary work over the years and recent past.
Firstly, the audit is not much of a performance audit of hydropower projects or hydropower companies. The basic purpose of hydropower projects is generation of electricity at stipulated annual, seasonal, daily and peaking hours. However, the CAG performance audit has not gone into this question at all at any stage. If it had gone into this, it would have found that 89% of India’s operating hydropower projects generate at below the sanctioned rates and half of them generate at below the 50% of design rate.
It would have also realised that over the last two decades, generation of electricity per MW installed capacity has reduced by a huge 20%. The CAG would have also found out that no one is assessing how much of the power generation from hydro projects is during peak hours when generation of peaking power is supposed to be the USP (Unique Selling Proposition) of these projects. Both storage-based and so called run of the river hydro projects involve huge social and environmental costs, apart from deforestation and displacement of people. They are justified on the ground that they meet the peak time demand for electricity. A performance audit that does not address these aspects is not only incomplete but also misleading.

After making several other points, the environmentalists concluded: "We are therefore forced to reach the unfortunate conclusion that this CAG audit is highly inadequate, misleading and devoid of any attention to the basic issues. We would urge CAG to urgently look into the issues raised and redo the audit keeping these issues in mind."
Another important point: this 'blue' (or 'gold') rush creates an excuse for the Chinese to build more and more dams on the upper reaches of the Brahmaputra in Tibet, the Yarlung Tsangpo.This issue is usually overlooked.
Today, as the Gates of Coal maybe closing down due the inquisitive CAG (and media) scrutiny, the politicians have to find new Gates.
This is one is an easy one, Arunachal is so far away...

CAG: Arunachal gave away 4 NHPC projects to pvt firms
New Delhi, September 10, 2012
Hindustan Times
Sanjib Kr Baruah,
Even as the government fights with its back to the wall on coal block allotments, another CAG report has pointed out how Arunachal Pradesh government took away four hydro power projects from the original allottee and gave it to private firms and joint ventures. According to the report, six projects were allotted to NHPC in 2000. However, between 2006 and 2010, the state government — in a display of complete non-adherence to rules concerning transparency and competitiveness — allotted four of them to private firms and joint ventures.
“The six projects were first allotted by the GOI to NHPC, but later, out of these projects, the GOAP (Arunachal govt) allotted two of them to private developers based on limited tendering from private parties only, two projects to its joint ventures, and one project to the NHPC,” the CAG said in its report.
“Transparency and competitiveness in allotment of hydro power projects, as envisaged in the hydro policies of the GOI, were thus overlooked,” it added.
Interestingly, all this was done despite instructions from the PMO in August 1999 to form Special Purpose Vehicles for survey, investigation and implementation of the six projects.
The six projects, aimed at generating 20,700 MW of power, are part of an ambitious plan to build a network of 168 dams for generating 63,300 MW of power from the state alone.
The mega-dam network is reportedly being built with brazen disregard for environmental, seismic, socio-economic and cultural factors. This has resulted in protests by indigenous people in upstream Arunachal and downstream Assam. A rallying point is the Lower Subansiri project, which — according to activists — was taken up without adequate feasibility studies.
http://www.hindustantimes.com/StoryPage/Print/927724.aspx
Posted by Claude Arpi at 7:17 AM