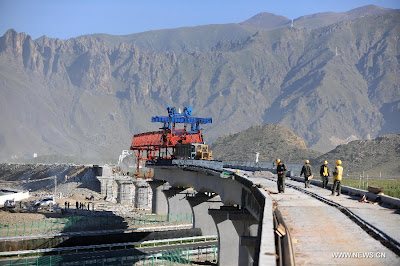 Xinhua reported today that Zhou Yongkang, member of the Standing Committee of the Political Bureau of the Communist Party of China (CPC) addressed a national conference in Beijing on the theme of maintaining social stability .
Zhou Yongkang called for more concrete methods to ensure social stability before the upcoming 18th National Congress of the CPC.
He said that maintaining stability was "the highest priority for the Party and government organizations at all levels" and he urged the government "to coordinate the domestic and international situations".
He mentioned the conflict-prone areas: "Campaigns against separatism and terrorism should be deepened and any sabotage attempts by domestic and overseas groups must be dealt with in accordance with laws and regulations so as to ensure the stability in key regions such as Beijing, Xinjiang and Tibet."
Radio Free Asia (RFA) had also reported about the 'stability drive' ahead of the Party Congress at the end of the year in China. RFA says:


China announced in March a rise of 11.5 percent in its domestic security budget to 701 billion yuan (U.S. $111 billion), with premier Wen Jiabao pledging a full modernization and expansion of the country's main riot-quelling force, the People's Armed Police.  Official documents leaked to the Chinese media have revealed that officials are typically ordered to step up intelligence activities among the local population and to focus in particular on "hostile foreign forces" who might try to collaborate with local activists to organize "subversive" gatherings during major events.

But more interesting is the 'stabilization' of the Middle Kingdom's border areas.
For the purpose, the railway to Lhasa (and soon Shigatse) will be extended in three directions to the Indian borders: one line to Chumbi Valley, close to Sikkim; one line to Nyingtri (Chinese Nyingchi), north of Arunachal Pradesh and finally a line towards Xinjiang through the disputed Aksai Chin.
It will be one way for China to reassert Beijing's claim on the high plateau of J&K State; it also be a link between the conflict-prone Tibet and Xinjiang  provinces.
A long way since, the PLA started building its first road in Tibet.
Xinhua News Agency reported on 29 November 1954: “The two large armies of road builders from the eastern and western section of the Sikang-Tibet Highway joined hands on November 27. Sikang-Tibet Highway from Ya-an [capital of the now defunct province of Sikang] to Lhasa is now basically completed.”
The communiqué further mentions that “gang builders and workers, including about 20,000 Tibetans, covered over 31,000 li on foot in the summer of 1953 and began construction of the 328 km of highway eastwards from Lhasa.”
Three weeks later, another report stated: “The Tsinghai-Tibet Highway is now open to traffic. The first vehicles reached Lhasa on the afternoon of December 15. Over 2000 km long, the highway passes through Mongol, Tibetan, Hui and Khazak brother nationality districts, traverses 15 large mountains… crosses 25 rivers, grasslands and basins at an average elevation of over 4,000 meters above sea level.”

The objective was already to 'stabilize the borders'.

China reaches at India’s doorsteps with strategic rails
Source: http://www.defence.pk/forums/
Even as Indian defence mandarins are tethering to give a go ahead to the construction of strategic railway lines at the Sino-Indian border, the dragon is working at a feverish pitch to get railway lines passing through Aksai Chin and lending right at India’s doorsteps.
When the Indian government is deliberating on the idea of who will finance the construction of 14 strategic railway lines in the inhospitable and inaccessible regions of Ladakh and North-eastern, China has started work on extending its railway line from Lhasa – the capital city of Tibet – to cities near the Sino-Indian border at a huge economic cost. Slicing through the geographical barriers, the railway line will cut the time taken for Chinese troop mobilization by half.
As per the intelligence gathered by the Indian armed forces the two lines connecting Lhasa to Yatung (a major trading town just about 30 kms from Sino-Indian border) and to Linzhi (about 70-80 kms from the border) will be complete by 2017. Yatung is situated at the mouth of the Chumbi valley and is connected to the Indian state of Sikkim via the Nathula pass.
“Work on two other proposed railway lines from Lhasa to Khasa near Nepal border and Kashghar in Aksai Chin will begin soon,” sources told The Sunday Standard. According to expert, this development will further tilt the strategic advantage in China’s favour as it gets cozy with the communist government of the Himalayan Kingdom of Nepal and strengthen its foothold in Aksai Chin, a territory claimed by India as its own. The rail link to Khasa is likely to be aligned with the Friendship Highway from Shigatse to Khasa, and further till Kathmandu.
On the Indian side, the Finance Ministry is struggling to shell out Rs. 80,000 crore to construct six high priority strategic lines bordering China.
Coupled with this, China has been sprucing its Western, Eastern and Central highways. The 1900 km long Western Highway goes from Lhasa to Aksai Chin after running parallel to Nepal Border. The Central Highway from Golmud to Lhasa and the Eastern Highway from Kunming to Lhasa is also being upgraded to make the mobilization faster.
“The completion of rail and road networks will help Chinese in using a combination of air-road and rail network to transport troops and material from the interiors to the border areas at a faster pace, raising concerns for India,” sources added.
While the red tape is stalling the growth of infrastructure on Indian side, the Army has taken possible measures to counter the strategic leverage gained by China. “For us mobilizing troops at a faster pace will be difficult owing to the sloppy infrastructure. Keeping this in view we are bolstering our presence in the forward areas by taking our men towards the border,” said Indian Army officials.
Posted by Claude Arpi at 4:42 PM