Will China attack India again in 2012? 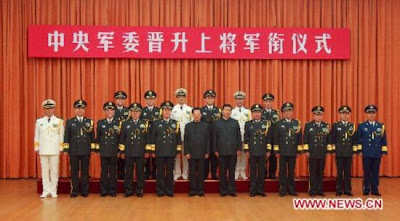 Quoting a note from India's external intelligence agency, the Research and Analysis Wing (RAW), the Indian weekly, India Today affirms that "there was a possibility of a skirmish or an incident triggered by China on the Line of Actual Control (LAC). ...Beijing was contemplating such an action to divert attention from its own domestic trouble."
While not going into the details of the RAW's analysis, such action could only be achieved after a military coup in China. Today, it is clear that the Big Nines (the Standing Committee member of the CCP's Politburo) are not in position to reach a consensus on an issue which may have the gravest consequences  for the Indo-China relations and this for the next fifty years.
Analysts have spoken about a Kargil-type operation, but can a new 'Chinese Kargil' remains 'Kargil' only'?
A military coup is however always possible.
A few moths ago, I cited a rumor circulating in China, reported on the Foreign Policy's blog.


Armed chaos in Beijing.
Rumor: Yesterday saw gun-battles in Beijing, the airport has been sealed, and martial law had been imposed on the Avenue of Eternal Peace (the street perpendicular to Tiananmen Square and that runs alongside many important government buildings).
Really? There appears to be something strange afoot in Beijing, but fears of a return to June 4, 1989 -- when tanks rolled into Tiananmen Square and the capital fell under martial law, a response both to a student protest movement and disagreements among members of the Politburo Standing Committee -- seem outlandish.
Source: Chinese articles published on overseas websites, trying to explain and debunk the current rumors floating around the Internet. Mostly they're just adding to them. As Foreign Policy's Christina Larson pointed out, this is when a Chinese Peter Jennings would be useful.
Likelihood: It's possible there was sporadic gunfire in Beijing -- though it's a city where guns are heavily restricted. But sealing the world's second-busiest airport and imposing martial law on a major thoroughfare in a city filled with millions of bloggers, hundreds of foreign journalists, and thousands of international observers without any credible source reporting this seems, well, impossible.

Though the Foreign Policy's blog dismissed the possibility, it has since then been confirmed that 'something' happened in March in Beijing.
It was linked with the power struggle between Bo Xilai, the former Chongqing's Party Chief and Zhou Yongkang, the powerful security boss of China on one side and the rest of the Standing Committee of the Politburo on the other side. The Epoch Times, the mouthpiece of the Falun Gong group reported:


Over the night of March 19 and early morning of March 20, Bejing local time, a message about a large number of military police showing up in Beijing spread widely across microblogs in mainland China.
The key figures in the action are said to be: Hu Jintao, the head of the CCP; Wen Jiabao, the premier; Zhou Yongkang, who has control of the People’s Republic of China’s police forces; and Bo Xilai, who was dismissed from his post as head of the Chongqing City Communist Party on March 15 by Wen Jiabao, after a scandal involving Bo’s former police chief.
Li Delin, who is on the editorial board of Securities Market Weekly and lives in Dongcheng District of Beijing, wrote on his microblog a report that confirmed unusual troop movements: “There are numerous army vehicles, Changan Street is continuously being controlled. There are many plainclothes police in every intersection, and some intersections even had steel fences set up.”
According to the message that went viral on China’s Internet, a military force with unknown designation quickly occupied many important places in Zhongnanhai, the Chinese leadership compound in Beijing, and Beijing in the early morning of March 20, with the cooperation of Beijing armed police.
The troops entered Beijing to “get and protect Bo Xilai,” according to the message.

I also mentioned on this blog an article of the South China Morning Post saying that Bo Xilai was in close relation with the 14th Group Army based in Kunming, Yunnan Province (part of the Chengdu Military Region). The Group is responsible of the Tibetan 'stability' and the border with India.
It is said that early February,  Bo Xilai paid a visit to Kunming to inaugurate an exhibition organized by the 14th Group Army, founded by his father Marshall Bo Yibo. It was Bo Xilai's 8th visit to Yunnan and the 14th Group Army. There are different definitions of a Group Army, but it usually corresponds to a Corps. The People’s Liberation Army has 18 regular 'Group Armies'. Two to 3 group armies are assigned to each of the PLA’s seven military regions.
With the arrest of Bo Xilai and sidelining of Zhou Yongkang, India may have escaped an attack against her territory.
The India Today's article does not mention the fact that President Hu Jintao may retain his job as Chairman of the Central Military Commission for one of two years more. In his eyes, this could avoid the 'chaos' of a too quick change of guard.
In the present circumstances, either the People's Liberation Army takes over China, or the 'Beijing consensus' will continue; in which case, the risk on an attack on India remains minimal.
It is however true, that Beijing has overdeveloped the border areas, mainly the Nyingtri (Chinese: Nyingchi) Prefecture bordering Arunachal Pradesh (by the way, Nyingtri and Tsona Dzong belong to the Chengdu Military region, while Western Tibet, bordering Ladakh is administrated by Lanzhou Military Region).
There is no doubt that if there is a threat, it will come from the East.
Ziminthang and Sumdorong Chu valley, north of Tawang could, like in 1962 bear the brunt of a Chinese attack.
But the question is, is it worth for Beijing 'civilian' rulers to open a front with India which would certainly retaliate an asymmetric manner (for example by recognizing officially the Tibetan Government in exile or targeting Bayi, the PLA's headquarters, north of the McMahon Line).
In the meantime, the leadership in Beijing is busy fighting for the control of the Middle Kingdom; they do not seem to have time for India.
It is good for them.
And presuming that Beijing believes that India has a non-performing government, it could the ideal occasion for Delhi to prove that it can sometimes perform, when required.

Threat of Sino-Indian battle looms large ahead of 50th anniv of 1962 war
India Today
Saurabh Shukla
New Delhi, July 10, 2012
A RAW report cites an increase in Chinese activity along the border with India.While Beijing spars verbally with New Delhi on a regular basis over Arunachal Pradesh and, more recently, displayed belligerence on the issue of oil hunting in South China Sea, the Communist neighbour could now be spoiling for an actual fight.
The threat of a Sino-Indian skirmish that may push the two Asian giants to the brink of war is so real that it has set the alarm bells ringing in the top echelons of the Union government. And, uncannily, the warning about the gathering war clouds comes just a few months before the 50th anniversary of the real war that had broken out between the countries when China launched simultaneous offensives in Ladakh and across the McMahon Line on October 20, 1962.
Last week, India's external intelligence agency Research and Analysis Wing (RAW) informed the government in a secret note accessed by Headlines Today that there was a possibility of a skirmish or an incident triggered by China on the Line of Actual Control (LAC). Beijing, the input stated, was contemplating such an action to divert attention from its own domestic trouble.
The assessment, shared with Prime Minister Manmohan Singh, senior national security officials and the brass of the armed forces, is now being discussed at the highest levels of the government and has raised concern.
The RAW note substantiated its claim by pointing to increased Chinese activity along the LAC. For the first time, China had stationed fighter aircraft in the Gongga airfield in the Tibet Autonomous Region throughout the winter months. It also activated new surveillance and tracking radars in the Lanzhou Military Region bordering India as well as in Tsona to monitor Indian activity, the RAW said.
According to the agency, the People's Liberation Army (PLA) conducted a large-scale India specific exercise in the Tibet Autonomous Region and Qinghai Plateau Region on June 14.
The threat assessment was made against the backdrop of these developments, coupled with the perceived threat to China's domestic stability owing to internal political developments, economic problems and social issues in the run-up to the 18th party congress, which would determine a power transfer in March next year.
Ahead of this event, a tectonic shift will be witnessed in China's political landscape in 2012. President Hu Jintao will step down later this year as the general secretary of the Communist Party and hand over the reins to current Vice-President Xi Jinping.
Xi, who is now 58, will take charge as the Chinese President in 2014. Along with Hu, seven out of the nine members of the party's highest decision-making body - the Politburo Standing Committee - are expected to retire. This includes current Premier Wen Jiabao, who is likely to be replaced by Vice-Premier Li Keqiang.
"The Chinese leadership could be tempted to galvanise inherent xenophobic fervour to divert domestic attention to an external threat. In this context, there are two potential areas of tension. The first is the ongoing stand-off in the Scarborough Shoal area and the other is Tibet," the note stated.
Scarborough Shoal, located in South China Sea or West Philippine Sea, is being claimed by three countries: China, the Philippines and Taiwan. Tension between Manila and Beijing grew when the governments of the two nations accused each other of illegally occupying territorial waters near the shoal. It sparked nationalist sentiments in both countries and the word "war" was mentioned by several commentators.
But diplomatic sources disclosed that the Indian assessment was based on the fact that Beijing may not risk a war in South China Sea because it could lead to the US and other Western countries coming to the Philippines' rescue. In the case of the Sino-Indian boundary, however, the possibility of a skirmish was much higher because it was disputed, they explained.
Sources said this assessment took into consideration China's displeasure over the role of the Dalai Lama in allegedly fomenting trouble, including immolations, in Tibet. Provoking a skirmish with India may be part of a deliberate strategy to teach India a lesson, they added.
"A prolonged conflict is, however, unlikely," the report concluded.
Posted by Claude Arpi at 6:45 AM