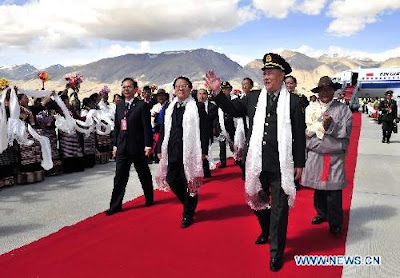 China is blowing hot and cold with India.
Bonhomie first!
According to PTI, an Indian army delegation has made a rare visit to Tibet and interacted with the officers of a Chinese military regiment based in Lhasa.
It is good!
A couple of weeks earlier, Jaishankar, the Indian Ambassador to China had visited the Tibetan Autonomous Region.
Regarding the military delegation, the news agency said: "A multi command Indian army delegation headed by a Major General made a day long visit to Lhasa on July 11 as part of efforts by both the countries to improve relations between the militaries."
That sounds a positive development, although PTI wrongly states: "This was perhaps the first time in recent years, an Indian military delegation visited Tibet." It is not factual.
In August 2009, Lt Gen V.K. Singh, then Army Commander, Eastern Command paid a week-long visit to Tibet and China. He was accompanied by the 4 Corps Commander (based in Tezpur-headquartered), responsible for the Arunachal Pradesh border.
Further, Lt. Gen. Shu Yu Tai, Chief of the PLA’s Tibet Military District came three months later to India. General Shu was taken around the headquarters of the 33 Corps (deployed in Sikkim) in Sukna, north Bengal.
At that time, The Telegraph reported: "China’s army commander for Tibet is being hosted by the Indian Army in its Eastern Command in Fort William, Calcutta, this week in a confidence-building measure that both sides hope will keep channels of communication open on border disputes."
But while these 'confidence-building' visits are happening, IDSA pointed to: "China’s People’s Liberation Army conducted a high altitude exercise with a new type of surface-to-air missile somewhere in the Tibetan plateau under its Lanzhou Military Area Command (MAC). ...the exercise was carried out at a mountain pass at an altitude of 5000 metres by a mobile PLA unit, and that three missiles were successfully fired at enemy aircraft targets in the 'South-east' direction."
The Indian think-tank added: "Apart from testing new equipment in the Tibetan environment, the exercise has reportedly helped the unit to gather more than a hundred technical data relating to topics like storage and maintenance of equipment, system coordination and troop mobility in the Tibetan plateau. The unit reportedly also collated ten kinds of tactical and training methods related to this missile in the terrain."
Another report from PTI stated that the Chinese opened fire on Indian Guards in Ladakh. The agency said:


After creating a tense situation for the last ten days by encircling an Indian post in the Galwan Valley, the Chinese opened fire yesterday afternoon on Indian border guards at two other places in Ladakh. It was officially stated that the incidents took place in the Chip Chap river valley and Pangong Lake area. The situation is being reviewed at top level and a strong protest is being lodged by the Government of India in respect of these incidents involving 'provocative firing' by the Chinese. According to latest reports reaching here, while the Indian troops were forced to open fire in self-defence in the Chip Chap river valley, they showed considerable restraint and did not return the fire in the Pangong Lake area.

China is definitively testing  India's nerves by showing one day its 'peaceful' face and the next, the muscles of a powerful neighbour which can smash India 'like an egg on a rock' (image used by the Tibetans, when Col. Younghusband entered Tibet in 1904).
One should also remember that this area is extreme strategic for China.
When Vice-President Xi Jinping visited Tibet last year, General Chen Bingde, Chief of General Staff of the PLA (and member of the Central Military Commission) did not accompany Vice-President Xi Jinping to Nyingtri Prefecture, north of Arunachal.
He headed for Ngari (Western Tibet) with some other military members of the delegation from Beijing. 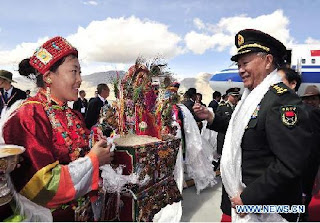 No report of his visit in Western Tibet (north to J&K and Himachal border) has appeared in the press, except for the caption of this picture:

The caption just said: "Chen Bingde is in Tibet to attend celebrations marking the 60th anniversary of the region's peaceful liberation."

India needs to continue to watch carefully and be prepared to any unpleasant eventuality.

PLA Conducts Missile Tests In Tibet
IDSA
Bijoy Das
July 30, 2012
Sometime in early July 2012, China’s People’s Liberation Army conducted a high altitude exercise with a new type of surface-to-air missile somewhere in the Tibetan plateau under its Lanzhou Military Area Command (MAC). This was reported by the PLA Daily Online and also by the Tibet Online news portal on 20 July 2012.1 The report says that the exercise was carried out at a mountain pass at an altitude of 5000 metres by a mobile PLA unit, and that three missiles were successfully fired at enemy aircraft targets in the “South-east” direction. The reported also noted that for the purpose of the exercise, the PLA unit covered thousands of kilometres across the Gobi desert, mountainous terrain and glaciers experiencing adverse weather conditions. Apart from testing new equipment in the Tibetan environment, the exercise has reportedly helped the unit to gather more than a hundred technical data relating to topics like storage and maintenance of equipment, system coordination and troop mobility in the Tibetan plateau. The unit reportedly also collated ten kinds of tactical and training methods related to this missile in the terrain. 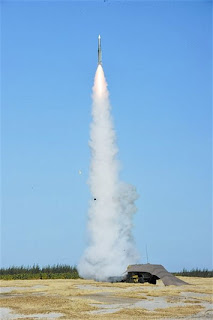 The area described by the report is possibly located somewhere east or north of Ladakh. If located east of Ladakh, it may fall under Ali (Ngari in Tibetan) area of the South Xinjiang Military District. Ali is part of the Tibetan plateau (administered by the Tibet Autonomous Region), but comes under the jurisdiction of the Lanzhou MAC headquartered in the Gansu province (See Map.) The part of Tibet lying to the east of Ali comes under the Chengdu MAC headquartered in the province of Sichuan. The Lanzhou MAC covers the entire Xinjiang Uygur Autonomous Region (XUAR). XUAR abuts eight countries in all—Mongolia and Russia in the North; three Central Asian countries (Kazakhstan, Kyrgyzstan and Tajikistan) in the west; and three South Asian countries in the southern direction viz. Afghanistan, Pakistan (actually the disputed Pakistan-occupied Kashmir) and India (the state of Jammu & Kashmir). If located north of Ladakh, it is also possible that the exercise was conducted somewhere immediately west of Ali, which too would be just north of Kashmir and in the Karakorams presently contiguous between China and Pakistan.
The “new” surface-to-air missile tested seems to be tailor-made for operations in the high altitude terrain and rarefied atmosphere of Tibet. Key information relating to its dimensions, target acquisition, radar, range and launch are unavailable. Intelligence agencies concerned need to collect and analyse such information from whatever signature the tests have emitted of a similar test earlier.
It is possible that this new missile is a truck mounted tactical weapon, which generally plays an air defence role for assets like airfields. As such, it is possible that a unit of the Artillery Brigade of the 21st Group Army from Zhongning, Ningxia Hui Autonomous Region, undertook the exercise.
Towards the end of September 2011, a similar test was conducted of two “new” missiles in Horqin grasslands, Tongliao, Inner Mongolia by an Air Defence Brigade of the Shenyang MAC. External factors like climate and topography were somewhat similar if not identical to Tibet’s. Reports suggest that these are the first of the third generation indigenous air defence missiles. Earlier generation missiles active in the PLA inventory are S300PMU2 and Hongqi series.
The news report also indicates that Indian aircraft have been assumed as “enemy aircraft” in the war exercise since the only country lying south-east of this area is India. Besides, there is no other “threat” from this direction other than India, according to Chinese perception, for which China might test a missile for in Tibet. The long distance covered by the unit undertaking the exercise is also reminiscent of the PLA’s STRIDE-2009 exercises. The troops must have taken back valuable lessons on mobility, mountain warfare and new weapon systems. Therefore, it would be fair to surmise that the PLA would in the near future induct this new missile along with a suitable unit of the Second Artillery in the Tibet Autonomous Region of China.
Nonetheless, this exercise and missile test throws up larger questions relating to regional security, mutual threat perception and bilateral relations between China and India. Although such tactical exercises are routine, it again reveals the security dilemma existing between these two neighbours. Earlier, the PLA has already twice carried out large military exercises in Tibet during 2012, once in March and later in June. The message which such exercises convey to India, needless to say, is that of belligerence. Development and deployment of the new missile in Tibet would definitely figure in the acquisition and deployment of matching defence hardware on the Indian side. Frequent tactical exercises and conventional force accretion cannot be equated with strategic defensive capacity building of a nation. Further, the exercise comes at a time when there are already rumours of a likely border skirmish between China and India, initiated by China. Against such a backdrop, what would eventually happen is the further intensification of the perception of an armed conflict and the militarisation of the Himalayan region. It has recently become known that the Himalayan glaciers are shrinking rapidly. The people on either side are also known to be languishing far below the national income averages. Ergo, militarisation is the last thing which the Himalayas need at this point of time.
India and China have been striving long to forge a peaceful solution to the disputed Himalayan border. However, military moves like the latest Chinese test run counter to such efforts for peace as also for China’s own assertion of its “peaceful rise”. When there are questions arising in the neighbourhood about its peaceful intentions, China ought to start more cooperative efforts of peace and harmony in every area of dispute rather than test and deploy machines of war. When the governments of both China and India have repeatedly stated their resolve to solve all outstanding issues including the boundary dispute through peaceful negotiations, it is difficult to fathom the rationale for such a missile test. The test and its publicity may indeed act as a dampener for the diplomatic process and its successes and go against the spirit of earlier resolutions of peace. The possible consequences would also undermine China’s efforts for a harmonious neighbourhood. India has already had to devote substantial resources for ramping up its defences along the border with China due to the latter’s military developments and exercises. While there is visible improvement of interaction between the two countries’ top level leaders, their military diplomacy and confidence building measures and cooperation in multilateral fora, such military activities reveal that their relations would take long to acquire the quantum of critical trust to say farewell to arms.
Posted by Claude Arpi at 7:12 AM