Will Propaganda save China? 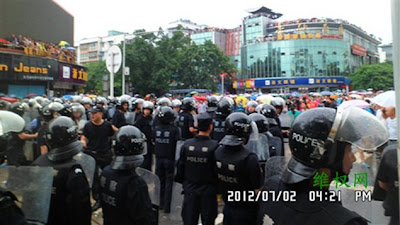 Li Changchun is a powerful man; he is no. 5 in the Standing Committee of the Politburo of CCP.
One of his objectives is to 're-popularize Chinese-style Marxism'.
As Chairman of the CPC Central Guidance Commission for Building Spiritual Civilization, Li is also de facto responsible for China's propaganda machinery and the Party's media relations.
His idea is to “enhance public faith in the country’s political theory amid social conflict and to answer the public’s doubts, reach a consensus and generate strength”.
He has little chance to succeed.
Take one example, you will understand why.
The city of Shifang, in Sichuan Province recently witnessed serious protests. The reason? The building of a heavy-metals refinery in town. It began by a crowd assembling outside the gates of a municipal government building, but soon the events turned soured. The New York Times reported:


Things then turned bloody as local security officials began muscling up on the crowds. In the end, there were arrests, tear gas, stun grenades, riot police, guns, batons, blood.

Reuters quoted a microblogger: "The government has repeatedly squandered the people’s patience. It is time for us to be independent.”
The New York Times added:


The police warned that anyone using the Internet, cellphones or text messages to spread news about the protest would be 'severely' punished. But there was a flood of photos and microblog posts, plus some video, and a widely circulated piece from Han Han, perhaps China’s most famous blogger.

The Chinese Global Times had to acknowledge that thousands local people,  strongly against the project, had come down in protest in the streets. The government newspaper added that "projects involving environmental concerns are always sensitive topics in people’s eyes around the world.”
More interesting, the Huanqiu, the Chinese language counterpart of the Global Times, commented: "such student actions should not be encouraged, particularly regarding social unrest and political conflict."
According to Chinascope website, the Huanqiu criticized "the interpretation of the government’s decision to shut-down the smelter as a victory for the common people. Such a stretched interpretation is merely the wishful thinking of some people and not a reality in Shifang.”
The Huanqiu commentary warned local and higher governments that they should not be fooled by such political fantasies and should not divert their focus from a proper aftermath of reflection and remedial action to vigilance for this 'revolutionary' trend.
Revolutionary or not, revamping Marxist thinking and repackaging it for popular consumption is an impossible task. At the age of Internet, social networks and microblogs, it is difficult to fool people and stop them expressing their genuine grievances.
Deng Xiaoping always advised to 'Seek truth from facts'. This was part of his Socialism with Chinese characteristics, to be applied at that time, to economic reforms.
The Chinese people have learned from his words.
Propaganda is just not enough. Li Changchun should have discovered this long ago.
As this article of the China Brief, the author says: "The CCP remains central to so much that some underlying justification is still required. If socialism without Chinese characteristics or Chinese-style Marxism are insufficient, disregarded or up for challenge, then the current government could find itself facing more serious problems."
It is certainly not in bluffing people that problems like corruption or pollution will be solved. Propaganda or not.

On the eve of the 91st anniversary of the founding of the Chinese Communist Party (CCP), propaganda czar Li Changchun gave a speech to a political theories seminar emphasizing the need to re-popularize Chinese-style Marxism. Li, a Politburo Standing Committee member, argued the task is necessary to “enhance public faith in the country’s political theory amid social conflict” and “to answer the public’s doubts, reach a consensus and generate strength” (Xinhua, June 29). Li’s speech is part of a continuing series of exhortations to revamp Marxist thinking and repackage it for popular consumption. Even though it is difficult to believe an increasingly pluralistic and information-saturated Chinese society will renew its faith in CCP ideology, the effort is nonetheless important for the CCP to maintain power on its own terms.
Li’s speech is an implicit admission that the latest campaign starring Lei Feng, a Mao Zedong-era propaganda icon known for his selflessness, has failed to rekindle the proper spirit among the populace since it began in February—or at least that the campaign is insufficient. The difficulty lies in finding another way, because two of China’s most important indigenous political frameworks, Confucianism and Maoism, are potentially dangerous to the CCP (“Another Lei Feng Revival: Making Maoism Safe for China,” China Brief, March 2). Clearly, the problems with popularizing socialism with Chinese characteristics are not new to Li or other members of the leadership. For example, speaking to the CCP Central Compilation and Translation Bureau in February, Li hailed the theorists’ efforts at “sinicization and popularization” of communist ideology. Li’s justification for strengthening ideological research—“to provide  advice to the country’s decision makers”— suggests observers should not so readily dismiss the importance of this subject (Xinhua, February 13).
Many observers believe the party has substituted nationalism for ideology as the foundation for the party’s continuing leadership; however, the CCP remains central to so much that some underlying justification is still required. If socialism without Chinese characteristics or Chinese-style Marxism are insufficient, disregarded or up for challenge, then the current government could find itself facing more serious problems. For example, the party cannot use nationalism as a substitute for its ideological reasoning that places the People’s Liberation Army (PLA) under the CCP’s control. Nationalization, de-politicization and taking the party out of the army are the three dangerous ideas that the PLA has been beating the propaganda drum against over the last six months (People’s Daily, June 25; PLA Daily, June 17, May 15, March 19; China Daily, March 13). While there could be a number of reasons for the propaganda, it also could be the natural reflection in the military of a society disenchanted with communist ideology. The PLA, however, is still the ultimate guarantor of government power.
Perhaps just as critical for the Chinese government, the CCP has positioned itself as the inheritor of Sun Yat-Sen’s democratic legacy—even if it has emphasized nationalism and people’s livelihood (minsheng zhuyi) over democracy (minquan zhuyi) (Red Flag, June 27; Outlook Weekly, October 9, 2011). This is why Zheng Ruolin, a correspondent for Wenhui Bao, could state boldly “Democracy has been broadly accepted as an idea” (Global Times, June 20). This point has been echoed in many places, including the 17th Party Congress political work report and a Central Party School book China and Democracy published in 2011. The continuing recurrence of democracy in important places indicates democracy is far more important than a mere rhetorical device, but relates to a serious intellectual contest that Li’s propagandists must confront. The government-approved, CCP-mediated democracy, however, rests on the vitality of socialism with Chinese characteristics—as Hu Jintao wrote “Developing the democratic politics of socialism is our party’s consistent objective of struggle” [1]. Democracy may be a CCP object, but it is delimited within a one-party system with the CCP at the center, on the party’s timeline and with structural political reform taking a backseat to economic development and stability (Red Flag, June 12, March 26; People’s Daily, April 9; PLA Daily, April 1) [2].
Although it is easy to dismiss the importance of Li Changchun’s call to popularize CCP ideology, the underpinnings of the CCP-led Chinese state depend on acceptance of Chinese-style Marxism—or unwavering popular faith in the CCP’s ability to govern. Regardless whether Li’s efforts and those of whoever succeeds him at the 18th Party Congress this fall are successful, the point is that the CCP is not satisfied with relying on coercion and competence to maintain its power. Beijing seeks to restore popular confidence in the system itself and Li is leading the intellectual charge while others focus on improving cadre performance.
Posted by Claude Arpi at 5:11 PM