More on the Eldorado 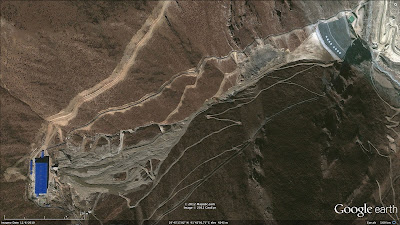 In continuation with my last week posting on the Eldorado (Tibet), here is one more article on the subject. It is published in the China Daily.
The Chinese economic machine needs to be fed with minerals, which are either imported or extracted from China's provinces.
Chang Fushan, vice-chairman of the China Nonferrous Metals Industry Association explained: "China has formed major resource bases such as those for copper in central area of the Tibet autonomous region, and for nonferrous metals in western Yunnan province, the central-eastern area of Tibet, and the Xinjiang Uygur autonomous region."
A website, Meltdown in Tibet, has posted excellent Google images of mining sites on the Tibetan plateau. Just have a look.
Meltdown in Tibet also highlight the importance of the railway line: "Mining and mineral exploration have increased dramatically on the Tibetan Plateau since the 2006 arrival of the Golmud-Lhasa railway link, and due to government programs and promotion. Along with the large government and business controlled mines, small unregulated mining operations are popping up all over the plateau. Due to low salaries, minimal health and safety standards, and weak environmental laws, normally uneconomic mineral deposits can be mined profitably by Chinese companies. Corrupt officials are willing to cut costs even more."
Already in 2007, Xinhua had announced: "Chinese geologists have discovered 16 large copper, iron, lead and zinc ore deposits along the Qinghai-Tibet Railway route since 1999, said the country's top geological surveyor here Wednesday.
Geologists initially found five non-ferrous metal deposits along the 1,956-kilometer railway with total possible reserves of more than 20 million tons of copper and 10 million tons of lead and zinc, said Meng Xianlai, director of the China Geological Survey (CGS) under the Ministry of Land and Resources.."
The mouthpiece of the Communist Party added: "They included a copper deposit in Qulong, Tibet Autonomous Region, with a proved reserve of 7.89 million tons, second only tothe country's largest copper mine in Dexing of east China's Jiangxi Province, said Meng. The CGS predicted the possible copper reserves in Qulong could reach 18 million tons, making it the biggest copper deposit in China. Estimated reserves of 760 million tons of high-grade iron ore were found in the Kunglun Mountains on the western Qinghai-Tibet Plateau and southern Xinjiang Province, which the Qinghai-Tibet Railway crosses, said Zhang Hongtao, deputy director of the CGS."
In other words, it was a good investment to 'liberate' Tibet in 1950.

Overseas focus remains key for nonferrous metals
2012-07-09
China Daily
China will accelerate the overseas exploration of nonferrous metals to meet growing domestic demand, senior industry officials said on Friday.
"Chinese companies have accelerated their exploration of overseas nonferrous mining resources in recent years, making the country an important driver of the global nonferrous metals industry's development," said Shang Fushan, vice-chairman of the China Nonferrous Metals Industry Association.
According to the association, China had overseas mining rights for 80 million metric tons of copper, 30 million tons of lead and zinc, and 6 million tons of nickel by the end of last year.
These mining rights have an annual production capacity of 200,000 tons of copper, 35,000 tons of nickel and 900,000 tons of lead and zinc.
"China's rapid urbanization and industrialization will support the growing demand for nonferrous metals," Shang said.
"However, the domestic proven reserves are far from enough to meet the increasing demand."
He called for continued investment in the mining industry to improve the quality of its products and increase the output of copper, aluminum, lead and zinc.
"The nonferrous metals industry is facing severe international competition," said Chen Quanxun, chairman of the association.
"Since the 2008 financial crisis, developed economies are more focused on the real economy (such as manufacturing), which has led to fierce competition in the mining sector."
In 2011, China's overall output of six major nonferrous metals — copper, lead, zinc, nickel, stannum and stibium — was 8.25 million tons, up 18 percent year-on-year. The growth rate was almost double the average annual growth rate of the output of the six nonferrous metals during the 11th Five-Year-Plan (2006-10).
As a new group of mines will be put into production soon, the output of major nonferrous metals products will continue to grow at a rapid pace in the years to come," Shang said.
He said China has formed major resource bases such as those for copper in central area of the Tibet autonomous region, and for nonferrous metals in western Yunnan province, the central-eastern area of Tibet, and the Xinjiang Uygur autonomous region.
At present, the recycling of waste materials, also known as tailings, has huge potential in China, especially red mud, barren rocks and mine tailings.
According to an investigation conducted by the association, the total amount of tailings from nonferrous metals mining between 1949 and 2011 reached 3.8 billion tons.
These tailings contain 1.45 million tons of copper, 730,000 tons of stannum, 200,000 tons of wolfram and 3.2 million tons of lead and zinc, which have the potential to be used in many ways, according to the association.
Posted by Claude Arpi at 6:47 AM

The Google Earth image that you posted from Meltdown in Tibet (www.MeltdowninTibet) highlights another problem: after mining takes place in Tibet, pollution follows. And guess where that pollution goes? Straight into Tibet's rivers, poisoning everything downstream not only in Tibet and China, but half a dozen other nations. China is not noted for its environmental safety standards: in fact, it has probably the worst track-record on the planet.
Things like arsenic will simply be flushed into the rivers at night, as is done all over China.
--Michael Buckley, filmmaker and writer