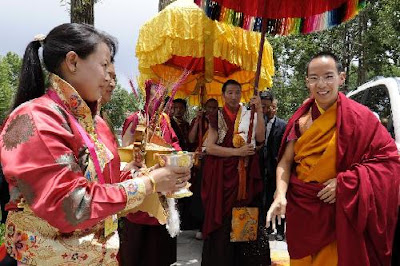 The Chinese Panchen Lama paid his annual visit to Tibet. During his stay in Lhasa, the young Lama brought the ‘spiritual touch’ to the Party’s propaganda regarding 'stability'.
He spoke about the promotion of social stability in Tibet: “If a person does not protect social stability, he is not fit to be called a man of religion."
He was obviously targeting the Dalai Lama.
Stating that the responsibility for a religious person is to help people to do good deeds, he added: “religious people should abide by the laws and religious code of conduct themselves." He further affirmed that he was “confident to let Tibetan Buddhism play a more active role in promoting social harmony and China's development.”
Interestingly, in an interview with The New York Times, the Dalai Lama recently spoke about the Chinese Panchen Lama in connection with the riots which occurred all-over the Tibetan plateau in 2008: “Of course Beijing wanted the boy to denounce the uprising. …But some of his friends have told me that he remains a Tibetan deep inside and preferred to remain silent. Beijing couldn’t use him.”
But the Party is visibly still fully using their Panchen Lama (while keeping the one selected by the Dalai Lama under house arrest); perhaps not as much as Beijing would like. Difficult to say.
In this connection, it is worth quoting from the letter (a 'poisonous arrow' according to Mao)  that the previous Panchen Lama (the Tenth) wrote to the Communist leadership in 1962.
Though couched in Communist jargon, it indicted the Party for its attitude and actions in Tibet between 1959 and 1962. Here is an extract:


The First Problem: On Suppression of the Rebellion

The rebellion in Tibet [in 1959] was counter-revolutionary in nature, being against the Party, the motherland, the people, democracy and socialism. Its crimes were very grave. Thus, it was entirely [feichang] correct, essential, necessary and appropriate for the Party to adopt the policy of suppressing the rebellion. Moreover, the Party wisely and properly pointed out that to suppress the rebellion required continuous and concurrent implementation of the three policies of military attack, political winning-over and mobilisation of the masses, from start to finish. Of these, concerning the political winning-over of rebels, the first point was to carry out the policy of the "Four Don’ts" towards those rebels who came to surrender, making no distinction between the leaders and the masses. The second was to carry out a thorough investigation of the specific circumstances of each individual, making distinctions between cases and dealing with each case as generously as possible, and offering them a way out. The third point was to expose the clandestine plans and cunning schemes devised for rebellion of the reactionary factions at home and abroad, to declare the criminality of the rebellion, and to examine whether there were any mistakes and defects in our work which could be used by the rebels for spreading rumours. If there were they had to be resolutely corrected and improved, and we had to strictly ensure that such things were prevented from happening again in order to gradually eliminate, by means of facts, the suspicions and anxieties of the masses of the people of all social stratas who were fooled for a time by the reactionaries. There were no further points apart from these.

However, when these points were implemented:
(1) Those who put down their arms and surrendered, having realised and regretted taking the wrong road, were not dealt with completely in accordance with the "Four Don’ts" policy, and many people were fiercely struggled against, arrested and imprisoned, and met with severe attack.
(2) When dealing with captured rebels, cadres adopted vengeful, discriminatory, casual and careless methods. Because they did not investigate the circumstances of the rebels with sufficient thoroughness or depth, they had no way to make rational distinctions in their treatment. As set out above, the reactionary factions at home and abroad launched the rebellion in the name of their religion and nationality. Therefore, among the rebels, there were many good people who had been deceived by the reactionaries, and there were also some people who were forced into joining the rebels by armed threats and because of the ruling power of the upper strata reactionaries. Most of the former and many of the latter were labelled as rebels and dealt with as such; they were not treated leniently.
(3) As for exposing the clandestine plans and cunning schemes of the reactionaries at home and abroad and declaring the criminality of the rebellion, of course [benlai] it was done well. However, as the reactionaries principally used the slogan "in order to save religion and in the interests of the nationality" to deceive the people, it is obviously of extreme importance for us to safeguard religion and the interests of the nationality, and to ensure that they are not damaged in the slightest. I shall discuss below how this area was the source of worry for us and pleasure for our enemies. Due to this, the work of political winning-over was not done well enough, which caused the rebellion to be large scale, to involve many people, to last a long time, to be stubborn in its stance and to rebel to the end. This caused unnecessary difficulty in the suppression of the rebellion.

You may think that it is rather mild, but the Panchen Lama was 'purged' for 14 years for having dared writing this.
Will the recent Dalai Lama's words about Gyaltsen Norbu, the candidate selected by Beijing prove prophetic?
Will the Chinese=selected Panchen Lama speak one for the Tibetans?
It may take some time, in the meantime, one can only hope that Gedhun Choekyi Nyima, the candidate selected by the Dalai Lama will soon be freed. Seventeen years in confinement is long for a kid.

Panchen Lama calls on monks to abide by law
2012-07-27
Xinhua
LHASA, July 26 -- A spiritual leader of Tibetan Buddhism on Thursday visited the Tibet Buddhist Theological Institute and called on monks to love their country and abide by laws.
The 11th Panchen Lama arrived at the institute at around 9 a.m. He presented Hada [khata] to the statues of Buddha in the institute while saying prayers.
The institute, Tibet's only regional-level buddhist theological academy, is located in the township of Nyetang, Quxu County, which is administered by Lhasa. 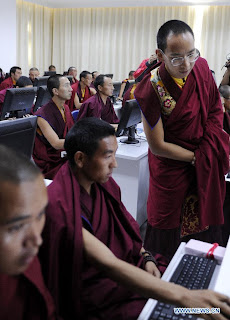 Featuring a distinctive Tibetan architecture style, the institute opened in October 2011 and has 150 students including living Buddhas and monks from various Tibetan Buddhist sects.
After performing the head-touching ritual to bless the students, the Panchen Lama asked the students to promote Buddhism, abide by national laws and better serve the country and its people.

"I hope you can make good use of the sound learning conditions that the institute provides to learn the essence of Buddhism and safeguard our country and serve its people, so as to be the true Buddhists," the Panchen Lama said.
The Panchen Lama began this year's Lhasa visit on Monday. He visited Jokhang Temple -- the most revered monastery in "holy city" Lhasa -- on Tuesday, paying homage to statues of Buddhas and leading a prayer service.
In 1995, at the age of six, he was chosen as the reincarnation of the 10th Panchen Erdeni in Jokhang through the traditional method of drawing lots from a golden urn.
Posted by Claude Arpi at 6:48 AM