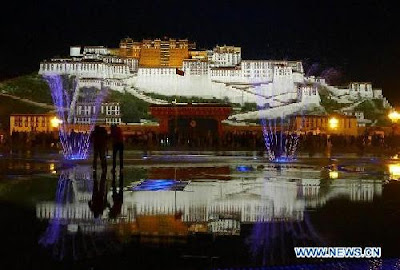 A report on Tibet of the Human Right Watch speaks of 'The Four Stabilities' for Tibet. It is apparently a brainchild of President Hu Jintao.
In order to 'keep a tight hand on the struggle against separatism', the new motto is 'stability overrides all' (wending yadao yiqie).
It practically means:
Already in March, Jia Qinglin, a member of the Standing Committee of the Political Bureau of the Central Committee mentioned stability as the first objective of the Party in Tibet and Tibetan-inhabited areas: "We should consider both internal and external situations and firmly follow the gist of 'making progress while maintaining stability,' striving for a steady economic growth in Tibet and the Tibetan-inhabited areas in the four provinces," Jia said.
He added: "Currently, the clique of the Dalai Lama are trying in vain to continuously create incidents in Tibet and the Tibetan-inhabited areas in the four provinces, ...Authorities should implement the prescribed measures well to resolutely crush the Dalai Lama clique's conspiracy of making Tibetan-inhabited areas unstable, thus making the masses able to live and work there comfortably."

In the meantime new guidelines for foreigners wanting to visit Tibet have been issued:
1) All groups entering Tibet through Nepal can get Tibet travel permits, as long as the groups has 5 or more people
2) Travel to Tibet from mainland China: If a group contains 5 or more people the travel agency can apply for an invitation from the Tibet Tourism Bureau in Lhasa, then send a copy to the group members by email. After receiving the letter then a group visa can be obtained from the Chinese Embassy. In this way a group can enter Tibet through mainland China, but they must enter and exit China together, and all members of the group must be listed on the group visa. Individual travel is prohibited.
A website Explore Tibet recently published this information.
The Tibet Travel Permit or Tibet visa is to be obtained from the Tibet Tourism Bureau; all travelers should deal with local registered agencies in advance to get the permit, as there are several different types of permit depending on where in Tibet the traveler plans to go.
To apply for the permit, travelers should submit their valid passports and a copy of their China visa to an authorized travel agency.
For travel to a restricted region such as Mt. Kailash, the permit must be applied for at least 20 days in advance. For travel to open areas like Lhasa and Mt. Everest, the permit should be applied for at least 10 days in advance.
The Chinese leadership seems today to live in fear, inventing everyday new restrictions, which in turn create more resentment amongst the Tibetan populations as well exacerbating the sense of identity of the Tibetans vis-a-vis the Hans. It is a loose-loose solution.
How long can Beijing seal off the Roof of the World from the rest of the planet?
Historically, this type of restrictions have never lasted very long.

I forget to mention that 'Truth' has vanished from the Chinese internet. Bloggers recently discovered that the word had been blocked on the country's leading social media website.
Online messages began circulating claiming that the Chinese characters for 'Truth' could not be searched for on micro-blog Sina Weibo, used by 300 million users.
If you type 'Truth', you get the following message: "According to relevant laws, regulations and policies, search results for 'Truth' cannot be displayed."
In India, we still believe that 'Truth will prevail'.

China: Attempts to Seal Off Tibet from Outside Information
Escalating Restrictions on Media and Travel in Tibetan Areas
July 13, 2012
(New York) – Restrictions on news, media, and communications in Tibet have been stepped up by Chinese authorities in the lead-up to the 18th Party Congress, due to take place in late 2012.
The measures appear to be an effort to cut off Tibetans in China from news not subjected to the government’s domestic monopoly on information.
They are presented officially as an attempt to prevent the views of the exiled Dalai Lama and his followers from reaching Tibetans inside China, particularly those living in rural areas.
The new restrictions, described in the official Renmin Wang media outlet on May 31, 2012, as key to maintaining stability and national security, aim to “ensure the absolute security of Tibet’s ideological and cultural realm,” according to Tibet Autonomous Region (TAR) Party Secretary Chen Quanguo in a June 27 interview. The measures involve significantly increased controls, particularly in the TAR, on internet use, text messages, phone ownership, music publishing, and photocopying, as well as intensified government propaganda through new TV channels, village education sessions, film showings, distribution of books, and the provision of satellite television receivers with fixed reception to government channels. As a result, Tibetans have virtually no access to independent news, are being subject to intensifying political education and propaganda in villages, schools, and monasteries, and face increasing limitations on travel into the TAR from other provinces.
“Under the guise of combating ‘separatism’ the Chinese government is blatantly violating Tibetans’ rights to the freedom of expression, religion, culture, and movement,” said Sophie Richardson, China director. “The authorities have a responsibility to uphold public order, but that cannot be used as a blanket justification for the kinds of measures to limit communications that the Chinese authorities are imposing in Tibet.”
According to a Xizang Ribao Online article on November 18, 2011, the measures follow an instruction by Party Secretary Chen to “promote full coverage by radio, television, publications, and networks to…enable the voice of the Party and government to cover the whole of this vast territory” of the TAR and to exert strict control over the media “to effectively purify the public opinion environment … and strike hard at separatist elements entering Tibet to carry out reactionary propaganda.”
In June 2012, Chen urged officials to “make sure that the Central Party’s voices and images can be heard across 120 thousand square kilometers,” and that “no voices and images of enemy forces and Dalai clique can be heard and seen.”
The scope of the new restrictions reflect a sharp change in official views about Tibetan unrest, which officials previously stated was caused by “a small number” or “a handful” of Tibetans, mostly monks and nuns plus a few urban laypeople, who were considered to have been influenced by the Dalai Lama or by exile groups. But following protests across the Tibetan plateau in 2008, leaders there have now acknowledged, at least in the domestic press, that the influence of the Dalai Lama is widespread among Tibetans, including in rural areas, where some 85 percent of Tibetans live.
These new measures are part of a Tibet-specific policy called “the Four Stabilities” that was announced by China’s leader Hu Jintao in an internal speech in early March 2012. They are being carried out in the name of the slogan “stability overrides all” (wending yadao yiqie) in order to “keep a tight hand on the struggle against separatism.” The goals include achieving “the overall coverage of internet management in towns and in the rural areas” (Xizang Ribao, March 19, 2012) and “strengthening the management of new media” (Xizang Ribao, March 18, 2012). On May 30, 2012, Hao Peng, a deputy party secretary of the TAR, told officials that, because of “the Dalai clique’s sabotage activity,” they must “strengthen the work of guiding the media,” “strengthen the supervision and management of new media such as the Internet,” and “firmly strike against the criminal activity of creating and spreading rumors by using internet and mobile phone text messaging” (Xizang Ribao, May 31, 2012).
Controls on travel from inland provinces into the TAR have also been tightened significantly since March 2012, with new limitations on travel into the TAR by monks, nuns, and lay Tibetans from outside the TAR. Additional restrictions on travel by foreigners to the TAR were introduced in May 2012 and again in early June.
These restrictions on movement into the TAR by Tibetans from outside the region appear to be designed to prevent protests taking place in the Tibetan capital, Lhasa, particularly following the almost 40 self-immolations that have occurred in the Tibetan areas of Qinghai, Gansu, and Sichuan provinces since March 2011. These protests appear to have been in response to increasing limits on basic freedoms, increasingly punitive security measures, and other concerns.
Since two Tibetans from Sichuan and Gansu set themselves on fire in Lhasa on May 27, 2012, Tibetans from those provinces or from Qinghai who do not have permanent residence in Lhasa, including many with valid business permits and valid temporary registration permits, are reported to have been forced to leave the TAR.
In 2009, United Nations High Commissioner Navanethem Pillay urged that Chinese authorities “reflect on the underlying causes” of disturbances in the TAR and surrounding areas, “which include discrimination and the failure to protect minority rights.”
“The Chinese government refuses to even acknowledge the serious grievances of Tibetans,” said Richardson. “Trying to seal the region off will only lead to further frustration and greater international concern.”

Read more at: http://www.hrw.org/news/2012/07/13/china-attempts-seal-tibet-outside-information
Posted by Claude Arpi at 7:06 AM