It is called amnesia!
Last year when a souvenir, ‘Congress and the Making of the Indian Nation’ was released on the occasion of the 125th anniversary of the foundation of the Party, incredulous readers could not
believe their eyes.
Though the Indian National Congress was still able to remember the role of former Prime Ministers Lal Bahadur Shastri and Indira Gandhi in the India-Pakistan conflicts of 1965 and 1971, the authors/eminent historians had amazingly forgotten that there was a traumatic war with China in October/November 1962.
Edited by Pranab Mukherjee, the souvenir recalls that in 1971 Indira Gandhi "was hailed as Durga, an incarnation of Shakti”; the armed conflict which saw the birth of Bangladesh was ‘her personal success’! Fine, but the Party showed a very selective memory.
The presidential candidate wrote in his introduction: “This publication is …but to a considerable extent the history of the Indian people. …This glorious history should serve as a guide and an anchor in helping the country negotiate future challenges.”
But how to negotiate the challenge if the past, however painful it was, is still brushed under the carpet?
The 1962 conflict with China remains a deep scar on the Indian psyche; it is only by giving the complete information to the people of India that it can be ‘healed’.
One of the problems with this ‘amnesia’, bordering on Alzheimer syndrome, is that the opposing party of the 1962 conflict has not forgotten anything, unfortunately it remembers the event through its own glasses.
Hong Yuan, a researcher with the Center of World Politics at the Chinese Academy of Social Sciences recently wrote in The Global Times: “China won, but never wanted, Sino-Indian war”. Yuan said: “China initially tried to avoid military confrontation, out of respect to India's ancient culture and sympathy that it had suffered a similar painful past of oppression by colonial powers. However, India's persistent provocation eventually breached China's bottom-line, and the People's Liberation Army (PLA) was forced to join the battle in self-defense.” 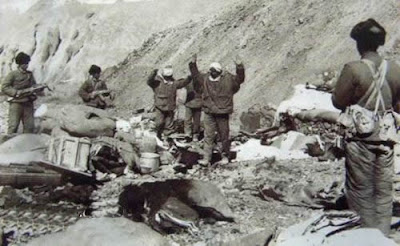 The same old version of the disastrous events.
The poor quality of ‘memory’ of the Congress (and the Indian Government in general) also shows the level of modern ‘official’ historians. Foremost amongst the writers of the ‘souvenir’ was Mridula Mukherjee, the then director of Nehru Memorial Museum & Library, an autonomous body under the Ministry of Culture which flouted the government rules prohibiting the director of such bodies from associating himself/herself with a particular political party.
Interestingly, this came soon after another ‘release’: two letters sent by Jawaharlal Nehru to US President John F. Kennedy on November 19, 1962. Thanks to the eminent journalist Inder Malhotra these two missives are today in the public domain.
How is it that the Indian Government does not remember that the Indian Prime Minister wrote to the US President about India’s ‘desperate’ situation? Nehru begged the US to immediately dispatch a ‘more comprehensive’ US military aid, ‘if the Chinese are to be prevented from taking over the whole of Eastern India.’
Till these letters were 'declassified' by Malhotra, there was only a brief mention about their existence in the Foreign Relations of the United States published by the US State Department; it mentions: "The letter was the first of two letters sent by Nehru to Kennedy on November 19. The second was delivered to the White House by the Indian Ambassador on the evening of November 19. These letters have not been declassified by the Indian Government.”
The US Office of the Historian quoted the summary published by S. Gopal, Nehru’s biographer: "Nehru, apparently without consulting any of his Cabinet colleagues or officials, apart from the Foreign Secretary, M.J. Desai, wrote two letters to Kennedy describing the situation as 'really desperate' and requesting the immediate despatch of a minimum of twelve squadrons of supersonic all-weather fighters and the setting up of radar communications. American personnel would have to man these fighters and installations and protect Indian cities from air attacks by the Chinese till India personnel had been trained.”
The letter continues asking for planes to assist the Indian Air Force (which was not even allowed to participate in the war). A panicked Nehru also wanted Indian pilots to be sent immediately for training in the United States.
Nehru told Kennedy that after the fall of Chushul in Ladakh, there was “nothing to stop the Chinese till they reach Leh.”
Though 50 years later Delhi does not remember, in November 1962, “with the advance of the Chinese in massive strength, the entire Brahmaputra Valley is seriously threatened and unless something is done immediately to stem the tide;” these were Nehru’s words. Fortunately, the Chinese had already decided to declare a unilateral cease-fire.
Fifty years after the tragic events of 1962, the Indian public still can’t access its own history as the government remains adamant not to publish the Henderson-Brooks report of the 1962 debacle and other documents related to the conflict (such as the Himmatsinghji Committee Report on the Northeast borders said to be ‘untraceable’ by the ministry).
On December 7, 2005, another senior journalist Kuldip Nayar applied to Ministry of Defence under the RTI Act to see the famous Report. When the case came to the Chief Information Commissioner, the Ministry of Defence stated: “Disclosure of this information will amount to disclosure of the army’s operational strategy in the North-East and the discussion on deployments has a direct bearing on the question of the demarcation of the Line of Actual Control between India and China, a live issue under examination between the two countries at present.”
The second argument might be true, but the first one is ridiculous.
A democratic government should be willing to open its archives and let a thousand histories bloom and give its own ‘official’ version of the facts.
In the meantime the Chinese have a field day, The Global Times says: “When the sound of China's artillery reached New Delhi, the PLA decisively halted its military operation and pulled back its troops. The PLA's performance in the war shocked Western strategists and did [China] proud. Its victory has also brought peace on one of China's most important borders for half a century.”
In another words, India should thank China for bringing 50 years of peace to the subcontinent.
At that time, for Mao and for Beijing still today: “War is a negotiating approach, but not a goal. Similarly, China's decision to fight back against India in the 1962 border war was to strike a peace with its neighbor.”
The Chinese historians pretend that: “China's peaceful intentions were further testified by its unilateral ceasefire on November 22, 1962.”
Mao just wanted “to wake [Nehru] up from the superpowers' influence by giving him a heavy punch, so that he would come to his senses and end the war. War is an extreme means of communication between civilizations.”
And Beijing added: “Mao wanted to send a message of peace to India, and to lay a good foundation for long-term friendship.
The conclusions of the Global Times were: “Fifty years ago, the Indian government was blinded by selfish interests, and wanted to force the Chinese to accept an illegal border line created by colonial powers. This was boldly rejected.”
The result of the Government’s obstinacy is that 50 years after the events the world has today only one version of those 2 months: the Chinese one.
Even if blunders were committed, and they have been committed, it is more important for the nation to learn from them, rather than to hide them.
It is by learning from its mistakes that a nation progresses, not by amnesia.
Posted by Claude Arpi at 5:50 AM