Power of Indignation — Power of Conviction 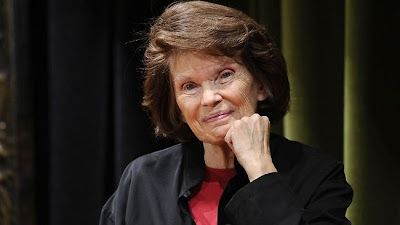 A great Lady has left us.
She always fought for Freedom.
Against the Nazis, when she was young and later for many other worthy causes.
Once when her husband was President, he was not keen to receive the Dalai Lama, as it would upset the Chinese.
She decided to invite him for breakfast at their private residence. The President had no choice to sit at the Dalai Lama's table.
The world needs more Danielles.

First lady of France who campaigned for many causes
Irish Times
Sat, Nov 26, 2011
Danielle Mitterrand: SHE WAS the nemesis of protocol staff, the foreign ministry’s favourite bête noire. When her husband François became France’s president in 1981, Danielle Mitterrand had no intention of conforming to stereotypical notions of the first lady – a term she hated – as hostess and goodwill ambassador. “I have no power,” she once said. “I have only my power of indignation, my power of conviction.”
She spent her life deploying these powers. She spoke up for ethnic Kurds and Tibetans, railed against apartheid, colonialism and the death penalty, and in recent years passionately championed the right to clean water. To the exasperation of officials, she invited Fidel Castro to Paris and loudly criticised Ronald Reagan’s Central American policies.
François, the only socialist to lead France since the current republic was formed, said his wife always considered him too moderate.
The couple met during the second World War, when both were members of the resistance against the collaborationist Vichy regime. It was her sister who introduced Danielle to the charismatic Captain Morland – François’s code-name at the time – in Paris in April 1944. He was on the run from the Gestapo, and wrote in letters of hiding out in Burgundy with “this beautiful girl with her cat’s eyes firmly fixed on the beyond”. They married that October – as the story goes, he announced even before the cake was cut that he had to go and chair a political meeting across town. “I’ll come with you!” she replied. And so Danielle came and sat in her wedding dress at the back of the smoke-filled room as they plotted the aftermath of the occupation. She turned 20 the next day.
Born Danielle Gouze on October 29th, 1924, in the eastern French town of Verdun, she was the daughter of secular, republican schoolteachers. Her father was a committed socialist who was sacked by the Vichy government for not giving the Nazi occupiers the names of Jewish pupils and teachers at the school where he was principal.
Danielle joined the Resistance at the age of 17, with her elder sister Christine, and was later awarded the prestigious Resistance Medal. When François launched his political career in the Socialist Party after the war, Danielle’s profile grew with his. He became president in 1981 and was elected for a second term in 1988.
When Mitterrand died in 1996, Danielle caused a stir by appearing at his funeral alongside his mistress Anne Pingeot, with whom he had a daughter, Mazarine. A famous photo shows Danielle comforting Mazarine at the graveside in front of the tricolour-draped coffin. “It was instinct,” she said.
In her 1996 memoir, En Toute Liberté , she wrote that she had known about the daughter since her birth in 1974. François, she said, “excelled in the art of seducing. I had to make the best of it.” Danielle Mitterrand was determined not allow her husband’s career dominate her own life, but her political involvement accelerated after he left office in 1995.
She set up a non-profit making humanitarian organisation, France Libertés, and was a tireless campaigner for her cherished causes. In 2005, she urged a No vote in the French referendum on the European Union constitution, saying it valued the economy more than people. It was soundly rejected.
During a visit to the Kurdish north of Iraq in 1992, she survived a bomb attack on her convoy that left seven people dead and 17 injured. “I will continue fighting until my death,” she said afterwards. A decade before the “Arab Spring” shook the French establishment out of its close relationship with Tunisian dictator Zine al-Abidine Ben Ali, Danielle Mitterrand attacked his regime for “its efforts to destroy civil society”.
She died on Tuesday aged 87 in a Paris hospital, having been admitted for fatigue and breathing issues four days earlier. Despite her strong association with the Socialist Party, her passing brought warm tributes from across the political spectrum, from the communists to the far-right National Front. “Neither setbacks nor victory caused her to deviate from the road she had laid for herself: giving voice to those that no one wanted to hear,” French president Nicolas Sarkozy said.
“She had within her a perpetual youthfulness that made her extremely charming, even if you didn’t agree with her,” said her nephew, current culture minister Frédéric Mitterrand. “She was courageous. She was virtuous, brave and driven.” In Iraqi Kurdistan, a day of national mourning was called after her death.
Mitterrand gave her last interview in October, as she was preparing to proudly mark the 25th anniversary of France Libertés. Photographs of the occasion show her in her apartment in central Paris, those fierce, demanding eyes that François described in 1944 staring into the camera.
The foundation did not always manage to achieve what she hoped for, she remarked honestly, although there were some great successes. “But the key was knowing we were there, that we were involved in setting out a new world.”
Danielle Mitterrand: born October 29th, 1924; died November 22nd, 2011
Posted by Claude Arpi at 2:39 PM