Thangthong Gyalpo and bridges in Arunachal 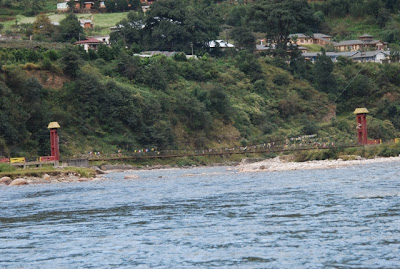 During my recent visit to Tawang, a suspended bridge collapsed. It has now happened again in the neighbouring district of East Kameng (see news item at the end).
In Tawang, six ladies lost their lives and only one body was recovered from the Tawang Chu.
The engineer responsible for the construction of the bridge was eventually suspended.
A similar tragedy has happening again, this time of the Kameng Chu (river). Between 30 to 50 people are said to have lost their lives.
During the 14th century, Thangtong Gyalpo, a great saint and siddha built several bridges in the region, they are doing fine.
I mention one of them in the article below, but there is also the famous Drokung Sampa near the Thagla ridge which marks the border between India and Tibet in Tawang district.
How to explain that seven-century old bridges are still being used while recent ones are collapsing?
Perhaps simply because we are living in Kaliyug and engineers, contractors and their political masters think only of filling their pockets and have no compassion for the 'common man'.
We need new Thangtong Gyalpos. 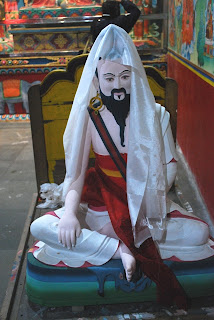 Thangtong Gyalpo
A popular figure in Monyul is the great mystic and Mahasiddha Thangtong Gyalpo. Born in 1385 in Central Tibet, he traveled widely in ail parts of Tibet and Himalayas. He is remembered in the Buddhist history, not only for his teachings which till today are considered as some of the deepest of the land of snow, but also for the iron bridges he constructed. He was a remarkable engineer and maybe the first Asian to understand the meaning of communication (seven centuries before it became the sign of our civilisation). He thought that whatever realisations he had achieved, whatever teachings he could transmit, would be of no use if the common people could not directly profit from it; the knowledge should not remain only in books or in the minds of yogis living in seclusion in caves, but become part of the daily life of ordinary people.
His hagiography said he built 58 iron bridges and 118 boats to cross rivers. One of these bridges called Chaksam Bridge can be seen today crossing Tawang Chu near Kitpi village towards Mukto. The iron was of such high quality that it is still in use after 7 centuries.
The other 'invention' that Thantong Gylapo has left for posterity is the Ashi Lhamo, the Tibetan type of opera still performed today. In his theatrical performances gods, Buddhas, and Boddhisattvas would admonish the common people and pass on to them the deepest teachings of the Buddha.
The sage passed away when he was 125 years old.
One funny thing is that he is always represented in a sitting posture with a red skin and long white beard, We were told that many Sikhs pay respect to him in the gompas thinking that he is one of the Sikh gurus.
Thangtong Gyalpo visited the renown Tagstang Gompa and meditated on the spot where five centuries earlier Guru Rinpoche had vanquished the enemy of Buddhism. He is also a 'Terton' or 'Treasure Discoverer' as those who discovered some of the sacred texts buried by Padma Sambhava are named.
These texts have been buried to be discovered at the later stage of the human evolution when "men will be ready to receive them."
He is also intimately linked with the history of Tawang area. When he visited Kitpi the local headman Berkhar Targe requested for his help, Thangtong Gyalpo gave his begging bowl full of chang and told him that if he manages to keep it carefully, he will have seven brave sons. Eventually, Berkhar Targe got the seven sons and his household became known as 'Pudun' ('the Brave Seven'). One of the sons Tanpei Dronme went for his education to Tibet and on his return he established many monasteries in Monyul and Bhutan. The descendants of Berkar Targe and amongst them Mera Lama and the Sixth Dalai Lama would play a very important role in the religious history of the area.


Arunachal bridge fall: 16 untraced
DNA
Prasanta Mazumdar
October 31, 2011
The army has been pressed into service to trace 16 people missing after Saturday’s footbridge collapse over the Kameng river at Seppa in East Kameng district of Arunachal Pradesh, around 320 km north of Guwahati.
The 50-metre-long hanging bridge, 40 metres above the riverbed, collapsed around 5.30pm when a group of people were on it to catch tari, an insect, which is a local delicacy. It is feared that the victims have been washed away by the swirling Kameng water.
“The army is using a couple of boats. The police and locals are also engaged in the search and rescue,” Seppa superintendent of police Kime Aya said. He added that so far three bodies had been recovered. Thirty people, mostly children, were rescued on Saturday.
“We don’t exactly know why the bridge collapsed but it was very old,” Aya added.
Posted by Claude Arpi at 7:49 AM