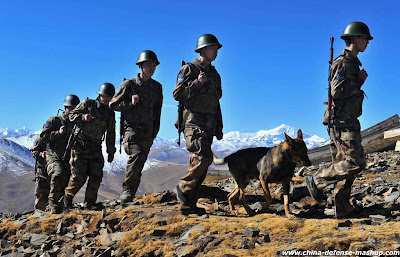 The conclusion of this article of The People's Daily (reproduced on China Military Online) is worth studying: "deploying 100,000 more soldiers along the border areas with China is more of a political move than a military one. After taking necessary precautions, China just needs to continue to develop friendly relations with neighboring countries and adhere to its established security strategy, and then India's troop increase will be in vain."
It is surely a political move, but also a deterrent against any misadventure from Beijing. The Chinese leadership should become aware that would it dare another 1962, it will hurt China as much as India.
It will not be an one-way affair like 50 years ago.
The improvement of India's defense capacity is a deterrent; it is not a 'military move' in the sense that India will not be the first to attack, knowing too well its limitations in infrastructure development and not being an 'expansionist State by nature.
India's troops increase will not be in vain, if the above message is heard in Beijing. No doubt, China will continue to "develop friendly relations with neighboring countries". Hopefully, it includes India.

India's border troop surge aimed at rising China?
China Military Online
November 10, 2011
Edited and translated by People's Daily Online
Beijing, Nov.10 (People's Daily Online) --India's defense ministry has already approved a 13-billion-U.S.-dollar military modernization plan and has decided to send an additional 100,000 soldiers to the China-India border areas over the next five years. This move is regarded as India's second phase of a military buildup along the China-India border.
Once the plan is approved, it will be the Indian military's largest ever expansion plan and its largest increase in the number of soldiers along the border with China since the India-China border clash in 1962 ended.
India's move is first associated with the adjustments to its national security strategy. India has begun to consider China as an opponent.
The East China Sea and South China Sea issues have further continued to expose some countries' "envious, jealous and hateful" attitude toward China. The changes in the international and regional security landscape will negatively affect China and other countries involved, but they will benefit one country: India.
The United States has recently cemented its ties with India and has regarded India as a crucial strategic alliance. At the same time, Japan has been busy facilitating the expansion of India’s military influence into East Asia.
India not only stepped into the South China Sea issue, which is very sensitive to China, but also increased troops on the border between China and India and upgraded their weapons. India is also strengthening its military exchanges with the countries around China.
When I was sent to the Indian Army Education Officer Training Center to study and participate in exchanges in 2007 and 2008, I met military officers from Vietnam, Afghanistan, Kazakhstan, Laos and Outer Mongolia.
Second, the move made by India is connected with some practical issues of the China-India relations. The general development trend of China-India relations actually is good. The high-level exchanges and political relationship between the two countries are quite harmonious. However, the people of the two countries do not understand each other well and the mutual military trust is also not strong enough.
Between China and India, there are not only border issues left over by the history but also practical issues of the complex triangle China-India-Pakistan relations. India always worries about the good relationship between China and Pakistan, which is the biggest problem between China and India.
Meanwhile, India insists joining hands with Vietnam to step in the South China Sea issue.
All of these factors will not help promote the mutual military trust between China and India. India incorrectly believes that China develops Tibet as a shield, and therefore it continues to strengthen its military power on the border to guard against and contain China.
India's arms expansion is also related to its domestic political climate. Certain Indian elites always take China as a frame of reference for India's development. As China has a clear lead over India in many areas, they are worried that India may lag behind China in seizing energy resources, and thus naturally see China's peaceful development as a "threat."
Certain Indian elites and media outlets have repeatedly criticized the Indian government for its lack of military investments, which they claim has led to slow development of the country's armed forces. However, the country's rapid economic development in recent years has set a solid foundation for its military buildup.
India is now emerging as a major buyer on the international arms market, and large amounts of advanced weapons from the United States, Russia, Israel and European countries have supplemented India's troop increase along the border areas with China.
In fact, deploying 100,000 more soldiers along the border areas with China is more of a political move than a military one. After taking necessary precautions, China just needs to continue to develop friendly relations with neighboring countries and adhere to its established security strategy, and then India's troop increase will be in vain.
Posted by Claude Arpi at 6:54 AM